The true way of the cross is not the way of despair, resignation, or disappointment. It is, in fact, the way to find one’s true self “resurrected”—the way to put on the new man or woman as the spiritual reflection of God.

For many Christians, as the Easter season approaches, religious sentiment may sometimes be drawn first to sadness and despair. Even Jesus’ disciples surely felt this as he struggled on the way to Golgotha with the burden of carrying his own heavy cross. The awful sentence of death that had been imposed on Jesus by the Roman authorities weighed on the hearts of all his followers who witnessed the event that day. Yet, because we know the whole account of what occurred more than two thousand years ago, any sense of defeat that might accompany the crucifixion story never has to carry the day. Easter is actually a time for the Christian’s rejoicing—even for the greatest of hope and glory.

Jesus’ “last day” on the cross clearly was not the end of his story, not even on earth. Sin, hatred, and the world’s rejection of the Master’s God-ordained mission, would not and could not triumph over purity, love, and the healing power of divine Truth. There was to be a great victory in Jesus’ resurrection and then finally in his ascension. Jesus would prove that his real life—the life of God’s man reflecting the eternal, almighty nature and grace of the Creator—could never actually be destroyed.

Also, in Christian Science, the fifth of its six fundamental religious tenets focuses specifically on the significance of Easter to the Christian Scientist: “We acknowledge that the crucifixion of Jesus and his resurrection served to uplift faith to understand eternal Life, even the allness of Soul, Spirit, and the nothingness of matter” (Science and Health, p. 497). So, both the crucifixion and the resurrection are central to the uplifting of “faith to understand eternal Life.”

Considering first the crucifixion, as what might be termed “the way of the cross,” it undoubtedly represents the way of self-sacrifice—the yielding up of a merely material sense of life and identity. But to acknowledge such self-sacrifice is certainly not to frighten or distress Jesus’ followers, for with every humble sacrifice of what may be un-Godlike or impure in one’s self, then all that is good, worthy, noble, and joyous in us is preserved and graciously purified.

Easter is a time for the Christian's rejoicing—even for the greatest of hope and glory.

In the New Testament, three of the four Gospels, in almost identical fashion, repeat an earlier command of Christ Jesus to his followers that came well before the crucifixion. Luke’s Gospel puts it this way and adds the word daily: “And [Jesus] said to them all, If any man will come after me, let him deny himself, and take up his cross daily, and follow me. For whosoever will save his life shall lose it: but whosoever will lose his life for my sake, the same shall save it” (Luke 9:23, 24, emphasis added). Day by day to give up the false, mortal perspective of existence for the spiritual reality of life in God, infinite Spirit, is to save us from the destructive beliefs of materiality.

Jesus taught his followers that the way of the cross would finally silence the aggressive and imprisoning claims of the carnal mind—the lies arguing that existence is determined by and confined in matter, the self-limiting suggestions of a life somehow separate from God. The man or woman who is willing to give up the false beliefs of life in matter, of mortal “being,” for the sake of the Christ, will find increased spiritual substance, indestructible life, boundless being. This individual is thereby saved—lifted into newness of life, regenerated, transformed. A “new man” or “new woman” replaces the old, limited, mortal counterfeit. In this transformation, it is progressively demonstrated that “there shall be no more death, neither sorrow, nor crying, neither shall there be any more pain: for the former things are passed away” (Revelation 21:4).

It’s also important that Christians don’t hold a merely sentimental view of the cross. Nor should we think of “the way of the cross” as necessarily requiring some supposed God-ordained test of personal tragedies or catastrophes. The true way of the cross is not the way of despair, resignation, or disappointment. It does not assume that we have been destined to carry misfortune or hardship throughout our lives. It is, in fact, the way to find one’s true self “resurrected”—the way to put on the new man or woman as the spiritual reflection of God. In the way of the cross, we discover the huge blessings of realizing “even the allness of Soul, Spirit, and the nothingness of matter.”

In one noteworthy passage, Science and Health observes, “Of old the cross was truth’s central sign, and it is to-day” (p. 224). The Christian Science textbook, Science and Health, also states: “The cross is the central emblem of history. It is the lodestar in the demonstration of Christian healing,—the demonstration by which sin and sickness are destroyed” (pp. 238–239). “Lodestar” can be defined as “the guiding principle or ideal,” the star by which a traveler directs his course. It’s also significant that the word lode has been used in mining to denote a substantial deposit of ore. When one finds the “mother lode,” he has discovered the source of great treasure. Lode means any abundant or rich source.

So, if the cross serves as the lodestar—the guiding principle; the star by which one directs his course—then it shows the way to abundant, spiritual life in Christ. Isn’t this the greatest of all treasures? Who would be hesitant to take up such a cross? It promises freedom—a resurrection and then ascension above the claims of mortality.

Arise, shine; for thy light is come, and the glory of the Lord is risen upon thee.
(Isaiah 60:1)

Our Master said, “And I, if I be lifted up from the earth, will draw all men unto me” (John 12:32). Is there anything discouraging or frightening about being uplifted, redeemed, transformed, liberated, and saved from the limitations of material existence?

Certainly there is great joy reflected in that fifth tenet of Christian Science, acknowledging the powerful significance of both the crucifixion and the resurrection. Clearly, while Jesus’ crucifixion showed his humble, unswerving willingness to give up a mortal sense of life, the full blessing for mankind would also require his resurrection (and, of course, the final ascension) in order to lift humanity out of the despair of death and destruction. As we’ve already noted, the crucifixion—if everything in Jesus’ mission were to have ended there—would not only have been the darkest of all days for his disciples, but it likely would have also been the death knell for their own future mission and the subsequent development throughout the world of Christianity itself.

Again, Jesus’ great work assuredly did not come to a conclusion with our Savior dying on the cross. There was the resurrection to life. There was the crown. There was the victory. Can we possibly imagine what it must have been like for Mary Magdalene and Mary the mother of James when they arrived at Jesus’ tomb early that morning after the Sabbath and found the great stone rolled away? The joy of the angel’s triumphant proclamation still rings down through the ages: “He is risen!” (see Mark 16:1–6.).

What all of this represented for Jesus’ immediate followers—the ultimate unreality and powerlessness of death, the eternal reality of life in God, the inseparability of divine Life and its perfect expression, man—all of this continues to serve and inspire us today. It uplifts our faith, deepens our understanding of Life eternal, and strengthens us step by step to demonstrate the full healing and saving all-power of Soul, Spirit.

And so, we find such happy reason to offer gratitude with the time-honored hymn:

Let us sing of Easter gladness
That rejoices every day,
Sing of hope and faith uplifted;
Love has rolled the stone away.
Lo, the promise and fulfillment,
Lo, the man whom God hath made,
Seen in glory of an Easter
Crowned with light that cannot fade.

How can we not sing with glad hearts!

William E. Moody is a Christian Science practitioner and teacher who lives in West Tisbury, Massachusetts. 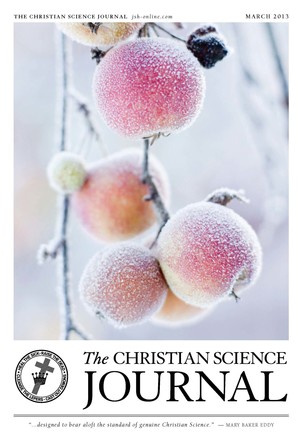 'Progress is the law of God'

The shape of the dance

Alert to fear, ignorance, and sin

Getting out of the small pond

The Bible's answer to economic turmoil

A strand of pearl-like moments

To the finish line with God

Unnecessary to suffer a cold

No room for bad effects

Is it ethical for a practitioner or nurse to borrow money from a patient or counsel their finances?