When confronted with evil in any of its apparent forms—disease, violence, pain, loss—we don’t ever need to feel that we’re on the defensive. That’s because Christian Science helps us understand that evil never has power or activity or momentum. It is 100 percent bluster—boastful emptiness. As Mary Baker Eddy insightfully puts it, evil is “nothing claiming to be something” (Science and Health with Key to the Scriptures, p. 330).

If we fail to realize and affirm this point at the outset of our prayer—especially, I’ve found, when metaphysically treating illnesses that have been labeled “aggressive”—then we may allow these lies to “frame the battle,” or try to dictate the conditions. They would attempt to control our thoughts and prayers about the situation much as Goliath did with the armies of Israel.

When Goliath stalked boldly onto the field and challenged Saul and his soldiers to fight with him (see I Samuel 17), he was framing the battle as physical. His whole appearance of brute force was so intimidating that not a single soldier could muster up the courage to face him.

Fighting Goliath on his terms seemed like a certain defeat since he was bigger, stronger, and better armed than any of Saul’s men. Only David was willing to meet Goliath’s challenge, and he did so by completely reframing the battle in several ways.

First, he reframed the battle as metaphysical instead of physical. He told Goliath, in essence: “You come to me with your big weapons and show of force. But I come to you in the name of the one supreme God whom you have defied.” His fearless response hints that he was seeing the challenge as rooted in something not physical, but mental and spiritual.

St. Paul spoke along these lines when he affirmed, “The weapons of our warfare are not physical [weapons of flesh and blood], but they are mighty before God for the overthrow and destruction of strongholds, [Inasmuch as we] refute arguments and theories and reasonings and every proud and lofty thing that sets itself up against the [true] knowledge of God” (II Corinthians 10:4, 5, Amplified Bible, Classic Edition).

David also reframed the battle as impersonal instead of personal. Goliath thundered, “Choose you a man for you, and let him come down to me” (I Samuel 17:8). He demanded a one-on-one fight, just as disease seems to draw us into a battle with the body. David’s genius was that he refused to measure himself against Goliath physically as others were doing.

Instead, he measured Goliath against God, and saw that the giant’s claim to power could never measure up to God’s infinite power. Though David was just a boy by comparison, his childlike innocence and spirituality enabled him to ask, “Who is this uncircumcised Philistine, that he should defy the armies of the living God?” (I Samuel 17:26). It was the “living God” that towered in his thought to such an extent that he was unafraid to face down the threat.

Christ enables us to “reframe” every situation in terms of the spiritual reality, impelling us to victory.

Finally, David ran to meet Goliath, reframing the battle as offensive instead of defensive. Sometimes, we may feel that we’re backed into a corner by a problem, that we’re pushed up against the wall by some perceived threat of disease or danger. But evil never has an offense—the ability to advance or progress. It relies on fear or consent to give itself the illusion of power and activity. But only God, Truth, has the power to advance. Only good has reality and momentum.

Referencing David’s classic encounter with Goliath, the author of Science and Health draws this parallel: “Materialistic hypotheses challenge metaphysics to meet in final combat. In this revolutionary period, like the shepherd-boy with his sling, woman goes forth to battle with Goliath” (p. 268).

As a Christian healer following Christ Jesus’ path, Mrs. Eddy was fearless in treating every type of disease, even those considered terminal and hopeless. Her only weapon was prayer—which, in today’s highly medicalized world, might seem as inadequate as David’s sling against Goliath’s heavy armaments. Yet she proved, time and again, that illness falls before the spiritual power and precision of prayer based in the allness of God, as Jesus taught and demonstrated.

Reading through the record of her vast healing work (see, for instance, the comprehensive biography Mary Baker Eddy: Christian Healer by Yvonne Caché von Fettweis and Robert Townsend Warneck), it’s clear that Mrs. Eddy “ran” to meet the evidence of disease with a conviction in the all-power and all-presence of God, Spirit, with the understanding that disease was never substantial or real.

And she taught how we can do this, too, as Jesus expected his followers to do. “You command the situation,” she writes, “if you understand that mortal existence is a state of self-deception and not the truth of being. Mortal mind is constantly producing on mortal body the results of false opinions; and it will continue to do so, until mortal error is deprived of its imaginary powers by Truth, which sweeps away the gossamer web of mortal illusion” (Science and Health, p. 403).

Mrs. Eddy’s instructions on treating disease are peppered with words like meet, rise, reject, rebel, denounce, and destroy. One can feel the same spirit that carried David into battle with Goliath. It’s a fearlessness that can only be divinely inspired—straight from God. The source of this spiritual authority is clearly the Christ, the Spirit of God, the same divine influence that empowered Christ Jesus and enabled him to speak and act and heal with such unchallenged authority.

While David was animated by the Christ-spirit (though he may not have recognized it as such) to prove God’s power over the brute Goliath on the battlefield, Jesus, our Way-shower, proved for all mankind how the Christ gives us authority over anything and everything that claims to defy God’s power—including disease, hatred, sin, and death. “I give unto you power … over all the power of the enemy,” he told his followers, “and nothing shall by any means hurt you”
(Luke 10:19).

Christ is the divine power, present in consciousness, that enables us to speak to disease, as Jesus did, with authority. Christ enables us to “reframe” every situation in terms of the spiritual reality, impelling us to victory.

When our two children were growing up, I got seriously ill during a very demanding work schedule. I chose not to have a medical diagnosis or medical treatment because Christian Science treatment had always proved so effective in my life. But, in all honesty, I felt intimidated by the symptoms, which were frightening. I was bolstered by the prayers of a close friend who was a Christian Science practitioner, yet I felt that fear had backed me into a corner.

Just then, my daughter ran into my room, left a simple note on my desk, and scurried out. I opened it and read, in her childlike handwriting, “God is love is good for Dad.” She may have meant to say, “God’s love is good for Dad,” but the spirit of her love instantly warmed me.

Several minutes later, she returned with another note, “God is with Dad all the time.” So simple. So true. Yes, the God who I knew to be infinite Love and ever-present Spirit was much bigger than this lie that illness could be part of me.

The threat of illness which had loomed so large was cut down to size by the truths underlying these simple, childlike prayers and, undoubtedly, all the prayer surrounding me during this time. And the illness began to dissolve and fade away quickly from this point on, and I was entirely healed.

Was the illness ever physical? Powerful? Personal? No. This Goliath, like so many I have faced in various forms over the years, had no substance, reality, cause, or momentum. My daughter’s childlike love awakened David’s shepherd-like courage and conviction in me.

This is what the Christ is doing for us all, every moment. Reframing the battle. Helping us see and feel, in the words of the Bible, that “the battle is not yours, but God’s” (II Chronicles 20:15). And the timeless truth becomes apparent—no battle! 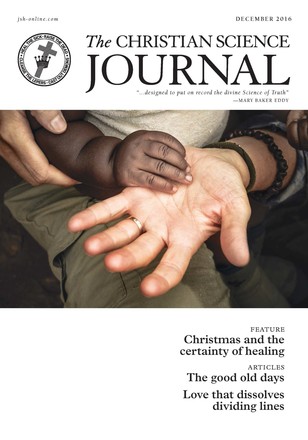