They stand, but not because, of old,
A prophet tuned his inner hearing
Into eternity, and heard. They hold
Steady against the windy veering
Of ancient sin and modern sneering—
The golden calf, the yellow press—
Simply because, diverse, cohering,
They are the rules of happiness.

This way to joy. No harsh and cold
Half-human god, no domineering
Heavenly tyrant sternly doled
Dangerous don'ts to us. No searing
Lightnings attend our Father's rearing.
The Ten Commandments speak to bless,
And echo in a storm of cheering—
They are the rules of happiness.

When tiny weeping Moses lolled
Cradled on water, loudly fearing,
And Pharaoh's daughter, brown and gold,
Stood puzzled, delicately peering,
Her gods inert—her Spirit, steering,
Guided her fumbling first caress;
The Ten breathed through the reedy clearing;
They are the rules of happiness.

Older than Egypt, still appearing
Newer than fashion's latest dress,
Still urgent, relevant, endearing—
They are the rules of happiness. 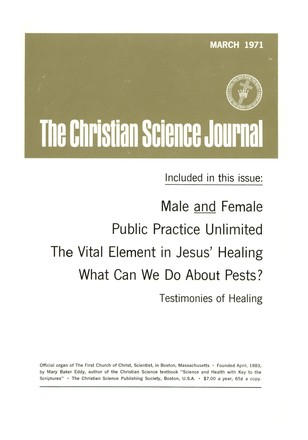 The Vital Element in Jesus' Healing

God Is Above, Through, and in All

"There is none else"

What Can We Do About Pests?

The Accuser Cast Down

BALLADE FOR THE COMMANDMENTS

"The Writings" of the Old Testament [Part II]

with contributions from The Christian Science Board of Directors | March 1971

An Essential for Quick Healing