Years ago I was disturbed about decisions made by the federal government of the United States, so I began to pray. A significant part of my prayer was a heartfelt affirmation that God, divine Love, Truth, and Mind, is the true Governor of all nations and peoples.

One day, while I was praying, a question came to thought: “What if the current US president should start enacting all of the policies you’d like to see enacted?”

My immediate, unthinking response was: “No! I want the candidate from the other political party to do that; I want this one out of office!”

That was quite a wake-up call. I was dumbfounded to find such a strong partisan feeling inside myself.

What followed was a humble recognition that God’s government is a law to every heart, including that current president. I suddenly saw that if I believed the president was corrupt, inept, power-hungry, or whatever, then I was contributing to those very weaknesses by my belief in them. In Christian Science we would call this “mental malpractice.” Yikes!

I began to see that, for the good of the nation (and all nations), it was vitally important to affirm and understand clearly and conscientiously that each elected official is the image and likeness of God and prayerfully to support their inherent honesty, uprightness, and intelligence, which they express as children of God.

That marked a huge shift in my thought about our leaders. Today, I am much more diligent that my mental “vote” about them supports their true Godlike nature, not human weaknesses. 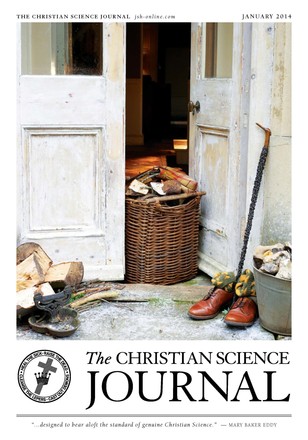 No surrender to indifference

Publishing Truth’s message for all humanity

The Board of Trustees of The Christian Science Publishing Society interviewed by the Journal’s Rosalie E. Dunbar | January 2014

From human ‘symbols’ to spiritual reality

A way with words

The power of compromise

Some thoughts on companionship

Too blessed to be stressed!

Trust in God at a sapphire mine

Healing brought me back to church

Rapid healing of a burn

A new member of the Christian Science Board of Directors

The Christian Science Board of Directors | January 2014

A new Clerk of The Mother Church

From the Christian Science Board of Directors: | January 2014