What spiritual power acts through brotherly love! It replaces strife and violence with peace, anger and misunderstanding with calm, sin with reformation and purity, lack and misery with abundance, and sickness and suffering with healing. This love does not have its source in men or material means. It comes from God, although an individual may provide the channel for it. Brotherly love is often akin to a forgiving love. Both are Godlike. Mankind must be ready to respond and conform to their spiritual power.

In the Bible account of Saul's persecution of the Christians we have an evidence of the false, mistaken human conviction so often expressed in violence. With the awesome revelation of Christ Jesus' true mission, and the realization of his own mistake, Saul was outwardly blinded on his way to Damascus. But it was revealed to Ananias that he was to go to Saul where he was praying. Ananias protested. He had heard of the evil that this man had done, and that Saul had come to Damascus with authority from the chief priests to bind all those who preached Christ. However, Ananias was truly and spiritually reassured. Obediently he went to Saul, greeting him with the words, "Brother Saul."Acts 9:17;

What an unction of the Christ-love poured forth in that meeting between Ananias and Saul! Saul's response to it was instant: "Immediately there fell from his eyes as it had been scales: and he received sight forthwith." Oh, may our thought, too, be freed from the scales of doubt, disbelief, distress, prejudice, pride, condemnation, and resentment!

How can we bring this forgiving, healing love to mankind? How can we best subserve the purposes of brotherly love so that we can greet anyone as "brother"? The brotherhood of man is founded upon the realization of the fatherhood of God, His allness, perfection, and completeness.

In Science and Health Mrs. Eddy writes, "With one Father, even God, the whole family of man would be brethren; and with one Mind and that God, or good, the brotherhood of man would consist of Love and Truth, and have unity of Principle and spiritual power which constitute divine Science."Science and Health, pp. 469, 470;

Christ Jesus knew the fatherhood of God and related himself and all mankind to this fatherhood. He was dedicated to being about his Father's business. This relationship to the one Father and the brotherhood of man knew no racism or generation gap. It transcended any narrow sense of personal authority or self righteousness.

The fatherhood of God and the brotherhood of man gives equality to all. Jesus could serve mankind and minister to the needs of men in healing, teaching, preaching, or in bathing the feet of his disciples.

His discourse with the Samaritan woman at Jacob's well was a one-to-one communication that outreached to include the world. It was simple and direct, although profound. It rose above resistance, prejudice, and condemnation. It signified the availability of the one Mind, Love and Truth, and unites all in one infinite divine Principle. It led the woman to leave her waterpot and go to her people glorifying God and this great prophet of whom she said, "Come, see a man, which told me all things that ever I did: is not this the Christ?"John 4:29; The Gospel tells us, "Then they went out of the city, and came unto him."

Jesus was able to meet each one with brotherly love. His love was so pure and discerning that it had unmasked for the woman her error. She who came to draw water left, bearing the tidings of God's glory and His Christ.

Forgiveness is a strong bastion of brotherly love. It is an evidence of charity, patience, forbearance, generosity, and justice. Forgiveness was an element of many of the healings of the Master. In several instances Jesus spoke words of forgiveness, knowing God's infinite love and forgiveness and man's reflection of this love. Such brotherly love is important in Christian Science healing.

Instant forgiveness is a wonderful guardian of thought against irritation, criticism, condemnation, resentment, reaction, or wrong action. Animal magnetism is the name or term for everything that does not originate in God, good. It is the name for all of error and our response to it. It is utterly unreal to us if we understand that only what comes from God and is good is actually real. Forgiving is an excellent way to deal with, unmask and destroy, animal magnetism.

Just how far should we go in forgiving? Christ Jesus answered this question when Peter asked how many times he should forgive (see Matt. 18:21). Jesus replied that he should forgive not merely seven times but rather seventy times seven. This reply indicated total, unlimited forgiveness.

Readiness to do this forgiving may require watchful effort and practice. When someone rudely or accidently commits an offense, we should not react or respond to it but quickly forgive him. For example, if we are driving in traffic and someone thoughtlessly or recklessly passes very close or fails to signal or cuts in from another lane, instead of silently or audibly condemning him, we can quickly say, "Forgive him, Father, and protect him," or, "Forgive him, Father, and take care of him." And when someone does not act up to the highest he knows or understands in Christian Science, we should quickly forgive him. He will know better sometime. Hold not his error, for you know better. Evidence true brotherhood by forgiving him, and harbor not his error lest it become your error also.

A latent prejudice may keep us from ready forgiveness. The word "prejudice" is frequently used these days, and people are often justly or unjustly accused of prejudice. The word may mean simply preconceived or ignorant judgment. Concerning racism and also possible national antipathies, do not let these harmful pictures, or educated beliefs, remain in thought. One might ask oneself, "Have I really destroyed all latent prejudice regarding the color of a man's skin or his nationality, his political philosophy or his religion, his habits or dress, his business or position? Can I see him in his true spiritual likeness?"

We should not let even small errors, hurts, or resentments accumulate. I remember an instance in my experience when an extremely sore throat appeared to hang on with tenacity. It seemed to grow worse. As I considered how to handle this through Christian Science, I remembered having reacted to the critical comments of a member of my family. I realized that I must forgive this and love more, even though the criticism was of my religion.

If God is the only real cause, there could be no real cause for criticism nor reaction to it. Regardless of what another might say or do, I had no justification or true cause for resentment. No so-called germ, infection, virus, or criticism could really cause soreness, suffering, disease, or discord.

Turning away from all of this accumulation of wrong thought, I put it out firmly and finally. With the willingness, forgiveness, and love that unfolded immediately in my grateful thought, the physical healing came very quickly. There never again arose that sense of resentment between us, and I was able to be happy in doing many little loving services for the relative.

In every instance we can forgive quickly and banish the error as no part of God's creation or government. Prejudices are no part of God's benevolent law and no part of the Mind which was in Christ Jesus. As man is the reflection of God, we should manifest the qualities of Love, Mind, Spirit, Soul, Principle, Life, and Truth. The power to do this is of God. We cannot let our own human will or finite mortal mind hinder the manifestation of eternal good.

We can manifest or express the love of Love, unchanged and unaffected by any material circumstance. We can express the intelligence, wisdom, justice, and impartiality of Mind. We can express the spirituality that does not weigh man as matter or judge him as a corporeal and finite mortal. We can express the warmth, grace, and affection of Soul that blesses all it beholds. It includes all even as the sun shines on all. We can express the unity of Principle that does not magnify personal differences but finds the fundamental source and goal that cements and harmonizes mankind in one great purpose. We can live that life which is without beginning or end, which glorifies God and the brotherhood of man. We can demonstrate the healing power of Truth, which blesses the earth.

Saul, who later took the name of Paul, knew the magnitude of love that embraced all mankind in a charity that he defines in its essence and action in Chapter 13 of I Corinthians. This charity is brotherly love that heals and uplifts both the one who expresses it and the one who receives it. It is the love of Love. It heals—regardless of history, race, color, or creed! It enables us to greet each one as "brother Saul." 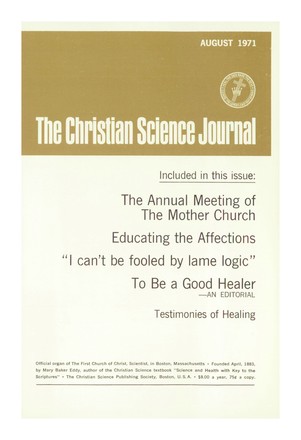 Annual Meeting of The Mother Church

WHOSE IMAGE ARE WE SEEING?

"I can't be fooled by lame logic"

An Age of Communication

John the Baptist and His Mission

To Be a Good Healer

Being a Practitioner for the World

Up to the time of my introduction to...

Part of one of Mrs. Eddy's hymns reads...

By George D. Wallett with contributions from Ruth Wallett | August 1971