In 1910, Abraham Flexner issued the Flexner Report. According to some, the Flexner Report was the most important occurrence in the history of North American medical education, calling for higher standards and protocols in medical schools. While that clearly made sense within the context of the medical profession itself, this shift also arguably began to stifle openness of thought to other options for healing. In particular, some Christian Scientists have looked back to that year and wondered if the Flexner Report significantly increased the medical world’s challenge to Mary Baker Eddy’s conviction that true Christian healing was indeed not only a Science but the most effective and powerful remedial agent, and the only true scientific method of healing.

Mrs. Eddy wrote, “Thought imbued with purity, Truth, and Love, instructed in the Science of metaphysical healing, is the most potent and desirable remedial agent on the earth” (Miscellaneous Writings 1883–1896, p. 4). Some may say that this claim might have had some merit during Mrs. Eddy’s time, but that the post-Flexner era of modern medicine makes Christian Science treatment appear less impressive. Just look, one might argue, at the huge medical complexes, the incredible modern medical technology, the “miracle” drugs that continue flowing into the marketplace, and the vast governmental participation in, and insistence on, material medicine as the truly realistic way to care for yourself in this day and age.

Mrs. Eddy’s words are vastly more than a human assessment. They are words of revelation.

Someone who is skeptical of Christian Science healing told me that while my approach to healing through prayer may have been about as useful in Mrs. Eddy’s day as the unsophisticated medicine of her era, I was now frozen in an outdated 19th-century method of caring for myself. I disagreed, but perhaps not in the way he expected. I pointed out that he was about 18 centuries off! Mrs. Eddy’s discovery was teaching me how to practice a 1st-century method of healing—the approach taught and practiced by Christ Jesus. His life established for all time the ultimate standard for confronting and defeating sin, sickness, and death.

So, what about this point my friend was making? Do we feel the weight of the view that Christian Science treatment doesn’t look particularly impressive compared to this giant and invasive medical and pharmaceutical industry that touches, and sometimes even defines, so many aspects of today’s human experience? Or do we feel a deep and pure spiritual conviction that Mary Baker Eddy was even more than truly insightful in how she described her discovery and its ability to heal the sick? Do we feel she was a prophet speaking out of revelation? Or simply a Victorian woman offering a human analysis—making a number of overstatements or temporary human assessments that don’t quite hold up today?

How we answer questions like these in our hearts might determine how effective we are in our healing.

Doctors speak, and often nobly, as physicians. Mary Baker Eddy spoke as an inspired metaphysician. She recognized that Jesus’ promised Comforter was the divine Science she received and gave to the world. Her sincere followers accept this as absolutely true. They see this revelation of divine Science as the second coming of Christ, Truth, establishing the healing Truth as “a permanent dispensation among men” (Mary Baker Eddy, Science and Health with Key to the Scriptures, p. 150). And they accept with all their hearts Jesus’ assurance that the Comforter would teach us “all things” and be with us “for ever” (see John 14).

Mrs. Eddy’s extraordinary words about the effectiveness of Christian Science healing must be placed in the context of her full revelation. This discovery brought to light the eternal fact that God is infinitely good, is All-in-all. This means that God’s child, man, is within this divine allness as His flawless image and likeness. Her discovery also brought to light the fact that Christ is never absent but here with us, revealing to human consciousness Truth and the practical effect it has when understood, healing every type of discord. This is the permanent Christ, revealing and proving the nothingness of every evil imaginable. It demonstrates God’s allness, and proves that divinity’s uninterrupted perfection is reflected by man and the universe.

In the midst of these revolutionary truths, no wonder Mrs. Eddy insists, “Subject sickness, sin, and death to the rule of health and holiness in Christian Science, and you ascertain that this Science is demonstrably true, for it heals the sick and sinning as no other system can” (Science and Health, pp. 337–338). Evidence of this statement’s truth was certainly abundant at the beginning of the 20th century. And an in-depth study of Christian Science healing shows how it continued to be true throughout the century (see “A study of Christian Science testimonies of healing” at christianscience.com/press-room).

And the healing continues today. I’ve seen evidence in my own life of how consistent and natural Christian Science healing is. Just a few of the healings have ranged from infections, to a degenerative internal condition, to the “incurable” common cold, to a diagnosed condition where the doctor stated that a healing through prayer would be medically impossible. Many healings have been gradual. Others instantaneous, such as the sudden disappearance of symptoms consistent with what’s called walking pneumonia.

The point here isn’t simply that Mrs. Eddy’s assessment of Christian Science treatment is more accurate, even today, than critics claim. It’s that her words are vastly more than a human assessment. They are words of revelation. This is what God was telling her even more than it is what she is telling us. And how we read and hear her words is crucial because it determines how well we demonstrate Christian Science today.

To the extent we recognize her inspired words as truly the Comforter fully available today, we will be better healers. But if we allow ourselves to be drawn into the skeptic’s way of thinking about Christian Science, as a somewhat outdated mode of caring for ourselves, our ability to heal will gradually diminish. If we don’t recognize the spiritual nature of this discovery, defining spiritual reality and how to live our entire life in accord with this reality, we’ll find ourselves adopting something of a “cafeteria” approach to healing—that is, we’ll pick and choose whatever method of cure for ourselves seems most likely to help at the moment.

Christian Science presents the Comforter that Christianizes, instead of medicalizes, human consciousness.

This cafeteria view of healing is more of a medical model than a spiritually scientific model. It fits with what has been called the growing medicalization of human thought. This medicalization would have everyone look increasingly to some form of materiality as our savior. In contrast, the Christianization of thought draws us to the incorporeal Christ as our Savior. Mrs. Eddy writes, “Nothing aside from the spiritualization—yea, the highest Christianization—of thought and desire, can give the true perception of God and divine Science, that results in health, happiness, and holiness” (Miscellaneous Writings, p. 15).

Yes, Christian Science presents the Comforter that Christianizes, instead of medicalizes, human consciousness. This is a profoundly potent healing agent. It provides what the world yearns for so deeply. The Comforter has come in a way that enables the humble disciple to deal successfully with everything instead of just some things. It has come to be with us permanently instead of providing a temporary quick fix.

If we wonder whether the practice of spiritual healing is getting harder, we may want to defend our consciousness from this medicalizing influence. We may feel the last thing we would want to be drawn toward is the world’s way of healing; nevertheless, we may feel this worldly effect if we aren’t consciously and regularly sheltering our thought from this subtle, but very aggressive influence. It would vigorously deny divine Science as “the most potent … remedial agent on the earth.”

In effect, this materialistic influence is saying that Mrs. Eddy’s words are not revelation at all. That they are a human assessment that had some validity a century ago but not today. It’s vital that we firmly and persistently reject this argument through prayer. It is perfectly natural to counter that influence with an inspired and Christ-impelled affirmation that the revelation is just as true and effective today as ever. It really is the most potent agent on earth because it is a divine agent, God-empowered.

The world appears to be full of influences. In regard to healing, each individual is called on to decide which influence is felt—the medicalization pull or the Christianization pull. Being perceptive to influences is vital to our well-being. It’s worth praying for the ability to recognize this statement by Mrs. Eddy as revelation today, speaking directly to each of us: “The divine Principle of healing is proved in the personal experience of any sincere seeker of Truth. Its purpose is good, and its practice is safer and more potent than that of any other sanitary method” (Science and Health, p. x). 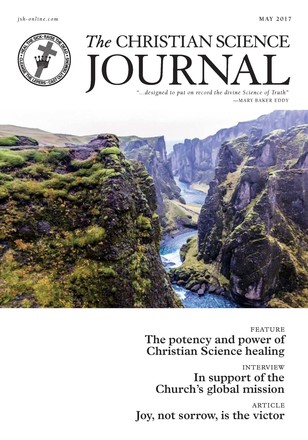 The potency and power of Christian Science healing

In support of the Church’s global mission

Elisabeth Schwartz interviewed by the Journal’s Suzanne Smedley | May 2017

Keep yourself in the love of God

Joy, not sorrow, is the victor

My journey to understand our uninterrupted divine Life

Physical healing and instance of protection