Years ago, I felt mentally abused by my boss. Everything I did on the job was questioned, including my motives and methods. The domination was subtle but constant and included intimidation, hounding, prying, and scare tactics. The boss also turned some fellow workers against each other. What made the situation even more difficult was that this person was highly respected by many other people in the organization.

It had always been my desire and practice to turn to God, divine Mind, in making decisions, but during this time I lost confidence in my ability to listen to God regarding my work. Instead I felt compelled to go to this individual for answers to avoid being criticized or judged. I felt that if I didn’t consult the boss about every single decision I made, my reputation could be harmed or I could be fired. This had a negative effect on my mental state. Feelings of self-doubt, fear of fainting, anxiety, and depression were a daily challenge.

While this was going on, I turned to several different Christian Science practitioners at different times to pray for me. I didn’t mention the challenges to anyone else, not even friends or family members, because I felt that talking about the problems would just make them more upsetting to me. I blamed myself for not being more courageous or better able to metaphysically overcome my fears and feelings of being trapped.

One day in the midst of this struggle, I felt completely unable to function in a normal way. I was utterly depressed, frozen with fear, and crying uncontrollably. To make matters worse, the following day I was to go on a trip where I was supposed to be of help to others. I didn’t see how I could possibly go, but my daughter, then a young teen, helped break the mesmeric drama I was experiencing. She read to me from Mary Baker Eddy’s writings and encouraged me to express gratitude for God’s goodness. She stayed at my side until my thought was finally calmed. Then she insisted I call a Christian Science practitioner.

This startled me, and I glimpsed for the first time that I didn’t need to feel like a victim. I began to have a tangible sense of divine Love’s presence sustaining me, and this enabled me to go forward with the trip. I was able to fulfill my duties, and I felt the embrace of Love expressed by the individuals surrounding me.

For about a year, continued daily prayer and work with a Christian Science practitioner enabled me to remain in my position at work, and the abusive behavior lessened. Although there were still times when fear gripped me, I knew that progress was being made.

During that year, the aggressive emotional symptoms were completely healed. Then, as a result of consistent prayer, my position changed, and I no longer worked on a daily basis with the individual who had been so intimidating. Eventually our paths parted, but I was left with an uneasy, vulnerable feeling whenever the person’s name was mentioned. The belief that this individual had an evil side lingered in my thought.

One day I had a conversation with a friend who had worked with the same boss, and this brought the entire drama vividly back to mind. I had been praying steadfastly for guidance and striving to keep my thought close to God moment by moment. I didn’t want anything to disrupt the inspiration that was coming to me, so I again decided to call a Christian Science practitioner for help.

Among the citations the practitioner shared was a statement from Science and Health with Key to the Scriptures by Mary Baker Eddy: “When the illusion of sickness or sin tempts you, cling steadfastly to God and His idea. Allow nothing but His likeness to abide in your thought. Let neither fear nor doubt overshadow your clear sense and calm trust, that the recognition of life harmonious—as Life eternally is—can destroy any painful sense of, or belief in, that which Life is not. Let Christian Science, instead of corporeal sense, support your understanding of being, and this understanding will supplant error with Truth, replace mortality with immortality, and silence discord with harmony” (p. 495).

I had read that statement hundreds of times but always related it to sickness. This time the word sin stood out as never before. Suddenly I understood clearly that evil is not a choice God’s man is ever presented with; evil is an imposition on human consciousness, a falsehood that must be separated from the individual. Learning to make this separation between my former boss and her attitude and actions was key to my healing.

Another statement of Mrs. Eddy’s that the practitioner shared explains the impossibility of abuse in God’s kingdom: “Christian Science translates Mind, God, to mortals. It is the infinite calculus defining the line, plane, space, and fourth dimension of Spirit. It absolutely refutes the amalgamation, transmigration, absorption, or annihilation of individuality. It shows the impossibility of transmitting human ills, or evil, from one individual to another; that all true thoughts revolve in God’s orbits: they come from God and return to Him,—and untruths belong not to His creation, therefore these are null and void” (Miscellaneous Writings 1883–1896, p. 22).

I understood that the spiritual truth of what we are—God’s spiritual creation—nullifies a story of abuse, no matter how real it might seem. The practitioner encouraged me to begin every thought declaring, “God is All-in-all, therefore …” and to follow that with a conclusion of perfection, in harmony with God’s infinite goodness. Doing this bathed my consciousness in divine Love, and as a result I was able to let go of all history of mistreatment.

After this call, I was filled with a deep awareness of divine Love’s presence and an undeniable conviction that this disturbing drama had never been true for this individual or me. It was as if I had just awakened from a dream. The Christ, Truth, so encompassed my consciousness that I felt a profound spiritual appreciation for this individual. I was entirely free of the old claims of intimidation, and since then I’ve looked forward to the next time I see her.

Although the healing was many years in the making, it was immediately realized when I let go of the mortal story I had been clinging to. What’s more, I was left with a sense of imperviousness to the influences of judgment, criticism, and even praise. I saw that everything spiritual man—the true identity of each of us—expresses is God-derived, and that I was therefore immune to the effects of personal judgment from others, or even from myself. I now have a clearer understanding that because we are God’s manifestation, we each have a unique, essential role in fulfilling God’s expression of Himself. And it can’t be contested!

This experience proved to be a valuable learning time that has helped me establish the foundation of my reliance on God in my work today. One of the many blessings from the years of prayer devoted to this healing is the development of spiritual discernment, learning to listen as divine Mind leads me forward in every endeavor. I’ve also learned to base my decisions and activities on divine Principle, not person. My career has strengthened and broadened into new avenues as the desire for approval from others has been replaced by the recognition that my only true need is to express God.

I am so grateful for the dedication of Christian Science practitioners and their willingness to support us with prayer through challenges of all sorts; for Christ Jesus’ example of unconditional love and forgiveness; and for Mrs. Eddy’s gift to mankind of this practical, healing Science. 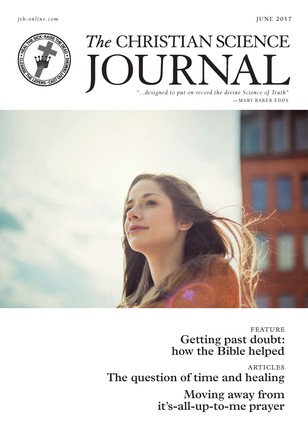 Getting past doubt: how the Bible helped

The question of time and healing

Moving away from it’s-all-up-to-me prayer

A ‘pillar of cloud’ leading the way

Peace at the gym

Taking the liberating step beyond forgiveness

The universal activity of the Christ

Healing and harmony for expectant parents

Freedom from pain and limitation

Reaching the seekers through prayer today