Everyone is naturally concerned with being—with what really is, as it pertains to himself and others; and when one considers the nature of being he sees that this is as it should be, for being is divine unfoldment, infinite Mind or divine Principle forever infinitely expressing itself according to its own unvarying perfection. The writings of Mary Baker Eddy make plain that the nature of being is unfoldment. Indeed she says (Miscellaneous Writings, p. 82), "Infinite progression is concrete being."

Unfoldment signifies a disclosing from within, the coming to light of something innate, indigenous, independent of external influence. It depends on native impulsion—on something inherent in that which unfolds. As understood in Christian Science, it is, in its absolute meaning, the immaculate nature of all that is, being expressed. This activity of divine Truth, discerned and demonstrated in human experience, supersedes and displaces false belief and brings greater harmony to humankind. That which is, unfolds, and this progress is manifest in human affairs when thought actively recognizes divine Mind as its source and rejects everything unlike Mind, thus bringing itself and its expression under divine Mind's law of unfoldment. Unfoldment must partake of the nature of infinity, because only infinity can express itself exhaustlessly.

Because infinity is, logic compels the acknowledgment that all there is to existence is eternally unfolding reality—infinite good ever appearing in obedience to its own infinite nature. This means that conscious, active, unfolding infinity or good is the only thing that is actually going on, or can go on. Because of its infinitude, real being excludes the possibility of anything outside of or unlike itself which can resist or obscure its spontaneous and satisfying evidence.

Unfoldment is divine Mind's mode of expression. It is Mind knowing and declaring itself. To humanity it appears either as the progressive revelation of reality in conscious individual experience, or as a crumbling of a false sense of what is good and desirable in order that thought may be turned from the false to the true. It is the activity of Love making divine facts manifest in human affairs; it is the showing forth, to human sense, of what is actually and continuously taking place.

It must be seen that divine unfoldment takes place as oneness, as allness. It cannot be going on here and not there; nor can it mean that "this" unfolds and "that" does not. Divine progress is universal as well as individual. It is each unfolding with all, and all unfolding with each. There is no private unfoldment, because Mind, God, is one and all, and unfolding infinity necessarily includes and blesses all. Opinionatedness, obstinacy, pride of accomplishment or attainment, pride of circumstance and pride of priesthood, all give place to this divine, satisfying unfoldment when one accepts it. Divine unfoldment includes all that can truly satisfy the ambition of the human intellect or the aspiration of the human heart; but these must first be held in abeyance and Truth sought for its own sake before satisfaction can be realized.

Unfoldment signifies infinity infinitely expressing itself forever, and its expression is infinite idea, or man, or universe. It is man's real, eternal experience, the only true experience that one can ever have. Nothing can be more specific than Mrs. Eddy's statement of this already quoted, "Infinite progression is concrete being." There is nothing that helps one more to put off fear, and to demonstrate an even, uncritical love of one's fellows, than a correct and continuous appreciation of what this means.

A right apprehension of infinity and its all-inclusive, universal activity, by showing the futility of mere human will and undemonstrated human effort, destroys a false sense of responsibility, and so relieves tension. It strengthens courage and expectation of good. It simplifies obedience to the Scriptural admonition and assurance, "In all thy ways acknowledge him, and he shall direct thy paths." Unfoldment reveals the simplicity of pure being, and thus begins to do away with the complexities and anxieties of mortal belief.

In the measure that one grasps the fact that God is Principle, and that this Principle is Love, he begins to see that all that is taking place or can take place is progressive good, and as a result his fears for the future and for his loved ones diminish noticeably. He has the assurance that the spiritual unfoldment which brings error to light will at the same time outshine the error. He perceives that what appears is either unfolding Truth or else some phase of error brought to light by Truth in order that Truth may dissipate it; and therefore increase of good and decrease of evil naturally characterize his human experience. Divine unfoldment is intelligence unfolding, Love unfolding, Life unfolding; and when accepted and affirmed as one's own thinking, it shows itself in greater health, happiness, and supply.

It must have been a steadfast conviction that being is unfoldment which enabled Jesus, in the face of insistent testimony to the reality of evil, to stand fearlessly and faithfully for man's perfection. He turned his attention from false presentations of personal sense to the certainty of harmonious facts and their progressive appearing. Following his example, a Christian Scientist is enabled to remain unmoved by the various phases error assumes to discourage him—sometimes on the very threshold of victory—and to continue in such assurance of the nature of unfailing good that demonstration follows. Indeed, Mrs. Eddy says in our textbook that "Jesus' demonstrations sift the chaff from the wheat, and unfold the unity and the reality of good, the unreality, the nothingness, of evil" (Science and Health with Key to the Scriptures, p. 269). Discouragement cannot long exist where the true nature of being is recognized, for then the inevitability of progress is seen, although, as with deep-rooted vegetation, the progress may not be immediately visible on the surface.

The understanding of Mind's unfoldment acts as the presence and power of Mind itself, because only Mind can know and evidence Mind's nature. Paul queries, "What man knoweth the things of a man, save the spirit of man which is in him? even so the things of God knoweth no man, but the Spirit of God." The truths included in Mind are known, not to mortal mind, but to the thought which understands and approximates the divine Mind.

Perceiving unfoldment as the true nature of all being begins to do away with resistance, opposition, habitual unwillingness, fear, anxiety, uncertainty, and therefore to open the way for divine spontaneity to appear in one's thought and affairs. It is a practical encouragement and aid in all human endeavor. It puts business on a firm foundation, for nothing can interfere with the success of a business or an enterprise scientifically seen as based in Mind, expressing Mind's unfoldment, and allowed to express it. Personal opinion, push, self-will, a humanly outlined procedure determinedly held to, all tend to obscure the harmonious action and evidence of Mind, and must be relinquished in order that satisfying progress may be manifest in one's daily affairs.

Jesus' feeding of the multitudes shows clearly the naturalness of unfoldment as Mind's mode of expression. Rejecting the personal sense presentation which blinded his disciples, he looked up to heaven, "the reign of Spirit; government by divine Principle," as heaven is scientifically defined in part in our textbook (ibid., p. 587). Thus recognizing all that exists as evidence of infinity, and therefore forever infinitely unfolding, he had the joy of witnessing his spiritual perception exemplified as unlimited human supply.

It would be well for all to recognize and rejoice at, as an evidence of unfolding infinity, everything big or little that comes in the way of good —of supply, or business, or occupation. Such an attitude of thought does much to release frozen assets, whether of opportunity, money, friendship, freedom, or health, and to keep one open to and receptive of good. When, therefore, one starts on a business trip or on a social or household errand, it is well to go not merely for the accomplishment of a limited end, but with thought open to anything in the way of good which may unfold.

It is worth reiterating that unfolding infinity is the whole of being, and this means not only that it is the only thing really going on, but that it is all that ever has gone on. Seeing this, one can redeem the past as well as the present, can regain the good of the years that have seemed full of mistakes. It shows that opportunity is ever present and ever available, and that scientifically there is no such thing as being too late for any good. Opportunity is not a momentary occasion, but a constantly unfolding idea.

Divine unfoldment is wholly good. Therefore every human being has the right to expect that, through true understanding, only good can come to him or to anyone. Likewise, he has the privilege of denying that he or another has ever, in reality, experienced evil, and of affirming and proving that good is and ever has been his only experience, and the only universal experience. In this way can be blotted out what appear to be present disturbances, because what human belief calls present is merely the outcome of what this same belief calls cumulative past. In the degree that one sees this, his thoughts become more uniformly good and impartially gracious, and he becomes a better friend, a more faithful, active citizen. He sees that good thinking, or thinking good, is the normal mental activity of every individual; that good constitutes the actual spiritual identity of everyone; and he experiences progressively the infinite unfolding of good.

Divine unfoldment is unfolding Truth, unfolding Mind, always kind, always beneficent. It is ever-satisfying Love in operation. Infinity, or being, necessarily unfolds infinitely forever. The whole of being is irresistible spiritual evolution. It includes all reality, all ideas, which are ever ceaselessly unfolding together. All unfolds as one, and each idea according to an unfailing, intelligent order. Let us, as Christian Scientists, learn to trust this unfoldment, to see that infinite unfoldment is inevitable, spontaneous; that it acts according to its own infinite momentum, and that it therefore connotes dominion.

This article is included in:
1983 - PAMPHLET

This article is included in:
1952 - PAMPHLET 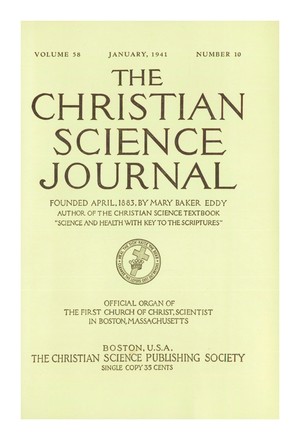 "THEY THAT BE WITH US"

"THE HARMONY OF HEALTH"

THE EMPIRE OF MIND

"THE GOLD OF HUMAN CHARACTER"

THE WAY OF DELIVERANCE

"MISCELLANEOUS WRITINGS" by Mary Baker Eddy ITS BACKGROUND AND PURPOSE