The true history of each one of us is a spiritual reality that God knows.

The Traffic Was Heavy on the one-way street in Granada, Spain, as we were driving to a historic district on the other side of the town. Suddenly the street ended, giving us no option but to turn right. After that, there were no exits on either side. When we approached the medieval area, all the traffic moved into a single lane, which began to narrow. Everybody had to slow down. The road narrowed even more. Our brand-new car, generously loaned to us by a friend, was much bigger than the ordinary European automobiles. Suddenly, we could go no farther. Looking out the windows, we saw that the car doors on both sides were lightly touching the stone walls of the ancient houses.

We could not get out of the car, and moving forward was impossible. We didn't want to ruin a car that didn't even belong to us! No way to back up, either, as the very long row of cars behind us quickly got bottled up, and the drivers, in a hostile mood, began to blow their horns and yell at us. It seemed we had reached an impasse, had gotten into a dangerous predicament.

Several minutes went by. Behind us, we could see a line of cars approximately six hundred feet long and could hear angry people honking. Then a young man took his shoes off, climbed over our car from the rear, came up in front of us, and offered to help us. Signaling very precise directions to our driver, he guided us through the narrow space. Very slowly the car passed through without a scratch, as if the walls had receded.

While all this was happening, I became aware of something else, something powerful. It was the reality of God, which provided a calm, full confidence in His unfailing protection. God always knows where we are. The true history of each one of us is not the narrative of human episodes. It is a spiritual reality that God knows, because He is the Principle of every spiritual fact—in other words, of everything that really takes place. In Him there has never been an impasse or danger, so we had never, in our history as children of God, been in a predicament or at an impasse. There is always a way out of difficulties, and we see the way when we are aware that God knows each one of His children. What He knows is true. What He knows is good. Whatever is not good, God does not know and does not authorize. The Apostle Paul said in the Bible, "Known unto God are all his works from the beginning of the world." Acts 15:18. And He knows everything, because He is omniscient.

This kind of reasoning, which gives us great stillness, is an important aspect of scientific prayer, and it pulled us out of that impasse. We can pray, or reason like that, in other situations, also. This prayer helps us see that whatever God does not recognize is not really going on. Anything contrary to God's nature is an error, part of the dream that says life is in matter instead of in Spirit. Mary Baker Eddy, who discovered Christian Science, calls this error a "dream narrative," when she writes in Science and Health with Key to the Scriptures: "The history of error is a dream-narrative. The dream has no reality, no intelligence, no mind; therefore the dreamer and the dream are one, for neither is true nor real." Science and Health, p. 530. But what is true and real, God has always known, from the beginning, from all eternity, where every one of His children truly is and always has been.

We are neither coming to nor going from God's presence, but are constantly embraced by it.

Our Master, Christ Jesus, was aware of this eternal existence and showed humanity that it is the only real existence—spiritual, permanent. He said, "I and my Father are one." John 10:30. He taught that God is our Father, the Father of every one of us, as well as his Father. There is no separation, no space between God and His children, between God and each one of us. This spiritualized way of perceiving existence gives us the possibility of understanding that we are neither coming to nor going from God's presence, but are constantly embraced by it.

In Science and Health Mrs. Eddy explains that "Christ is the true idea voicing good, the divine message from God to men speaking to the human consciousness." Science and Health, p. 332. The human consciousness hears and understands this message, which pierces through the dream of life in matter and sees spiritual reality, the true individuality of every woman and every man. When this reality is recognized, any picture of danger is erased. The dream then ceases to torment human thought, and the way out of any kind of predicament appears.

This scientific Christian prayer goes to the root of any disturbing situation. When the predicament is disease, it denies and disproves its history, denies any precedent that would explain its causes or its past or its origin. This prayer establishes the consciousness of health and well-being. As a result, pain and other symptoms recede. For scientific prayer, nothing is incurable.

If a predicament is due to hate, scientific prayer goes to the root of anger and resentment, denying them, and completely refuting any reality to their history or to any precedent that would justify them. It declares that God's love was there all the time. This prayer causes ill feelings to withdraw. It brings God's law of justice and mercy to bear on the situation. Then, no mistake is unforgivable, no offense is unpardonable.

If the predicament is lack and hunger, enlightened prayer goes to the supposed origin of the scarcity and poverty, proving that what seemed to occasion them and any precedent that would make them look normal are not the spiritual reality. Prayer recognizes the infinite resources of Spirit, of God. Then, poverty and starvation are not insurmountable.

Such scientific, enlightened Christian prayer enables each one of us to take refuge in that quiet place in thought where the Christ speaks and stills the uncertainties and threats of human circumstances. No matter what the predicament may be, the Christ has already established the precedent for the reality of true being to appear, causing all anguish, disease, hate, and every form of hunger or human need to recede. There is never a place where the omnipresence of God does not prevail. It forever shelters us all, even as it did on that narrow medieval street in Granada. In God's inevitable omnipresence, there is no impasse.

When things aren't going the way they should at work, it's tempting to push or manipulate to get a solution. But as this engineer learned, yielding to God can bring a more encompassing answer.

Deadlock? Not in divine Mind

Deadlock. Stalemate. Impasse. Standstill. One would be hard pressed to listen to an hour of news reports and not hear at least one of these words. We hear of peace negotiations at an impasse, budge... 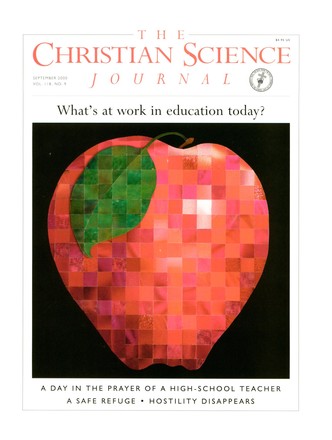 with contributions from Richard Bergenheim | September 2000

What's at work in education today?

The possibilities of this moment

A day in the prayer of a high-school teacher

with contributions from MAYA ANGELOU | September 2000

Science and Health with Key to the Scriptures: its impact on the family

Testimony from the 1970s