Those who have not been instructed in Christian Science are apt, when they see the word "Principle," to think of something cold or abstract; whereas Christian Science reveals Principle as being synonymous with divine Love. It is creative, vitalizing, energizing, animating. It is the one supreme governing power, sustaining and maintaining its own creation or universe in perfect harmony. It expresses all the tenderness and loving care of the one Father-Mother, God, which in fact it is. On page 583 of "Science and Health with Key to the Scriptures" Mary Baker Eddy, the Discoverer and Founder of Christian Science, defines "creator," in part, as "Spirit; Mind; intelligence; the animating divine Principle of all that is real and good; self-existent Life, Truth, and Love."

In the allegory beginning on page 430 of Science and Health, Mrs. Eddy shows conclusively that personal sense is the enemy of mortal man. She points out in this allegory that personal sense works through so-called health laws, physiology, hygiene, and other material beliefs to bring about mortal man's discomfiture, and eventually to terminate his existence. But she also shows that Christian Science is able to annul the asserted laws of mortal mind and to free men from the supposed effects thereof.

In addition to the physical freedom assured those who understand divine Mind to be the Principle of health, wholeness, is the more mental or spiritual aspect of the operation of divine Principle in the consciousness of those who turn to divine Love for guidance in their daily human experience. If one is willing, sincerely and trustingly, to depend on divine Principle for guidance in taking the human footsteps which are necessary, in matters which pertain to his affairs, he will find without exception the correct solution of the problems by which he is confronted. And Mrs. Eddy says (ibid., p. 254), "When we wait patiently on God and seek Truth righteously, He directs our path."

One difficulty with regard to the solution of problems which concern the welfare of others as well as ourselves, is that all mortals, including students of Christian Science, are frequently inclined to proceed from the standpoint of self-will and human opinion, rather than from that of divine Principle. The inclination sometimes appears to be to outline humanly how to proceed, and then expect that Principle will conform to such procedure. To believe that this is possible often results in very unhappy and very unnecessary complications.

What Christian Scientists, as well as others, need to learn is that nothing of permanent value is to be gained by trying to force others through self-will, through mental or verbal pressure, or through undue persistence, to accept their viewpoint, even though it may be approximately right. We all need to gain that true humility and obedience to Principle which Jesus had attained when he was able to say, "Nevertheless not my will, but thine, be done."

There appears to be inherent in the human mind a sort of self-righteousness which encourages mortals to believe that the course they advocate is the only right course and that which others propose is necessarily wrong. This, all too frequently, leads to what is often referred to as an impasse, and hinders rather than helps the demonstration of divine Principle. Such an attitude of thought does not emanate from Principle, but from personal sense, and should be seen for what it is, and avoided.

Willingness to be guided by divine Principle in our actions, especially where they affect others, rather than to be influenced by personal sense, does not involve a supine yielding to the dictates of error. Neither does it result in any form of unprincipled appeasement. On the contrary, it means simply that one is truly willing that the law of God, absolute good, should prevail, rather than that any action, however desirable it may appear, should be taken as the result of human will or opinion.

The master Christian said at one time, "As I hear, I judge: and my judgment is just; because I seek not mine own will, but the will of the Father which hath sent me." It seems fairly obvious from the foregoing declaration that Jesus sought not to allow his judgment of others to be based upon personal sense, but rather upon divine Principle. Let us as his followers seek more earnestly day by day to follow his example not only in this, but in all other respects.

It should be plain that the operation of divine Principle in human experience applies to nations as well as to individuals. Were the nations of the world, therefore, governed by Principle, instead of personal sense, the excuses for war and strife would cease to exist. And in the present, when tumult and confusion appear to prevail, it is well to hold firmly to the fact that, in reality, divine Principle. Love, is the only controlling power. Speaking in the name of God, the prophet Ezekiel said, "I will overturn, overturn, overturn, it: and it shall be no more, until he come whose right it is; and I will give it him." 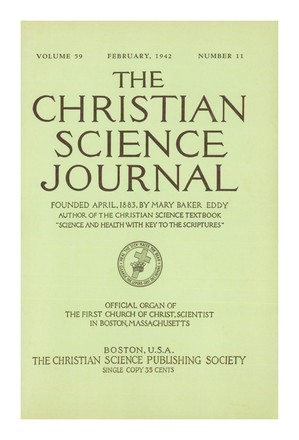 THE ONENESS OF ETERNAL MIND

"THE STABILITY OF THY TIMES"

USHERING IN THE CHRIST, TRUTH

HEALING OUR CONCEPT OF SUPPLY

THE EVER-PRESENCE OF CHRIST, TRUTH

"THE RIGHTS OF MAN"

GOD IS THE ONLY CAUSE

CHANGING THE WATER INTO WINE