Many commands and useful directives are warnings of what not to do: Don't drive through a red light; Don't put your hand on a hot stove; "Say No to drugs," and so on. In the Manual of The Mother Church, Mary Baker Eddy gives "A Rule for Motives and Acts," and its last sentence is a warning against doing a lot of things wrongly. It reads, "The members of this Church should daily watch and pray to be delivered from all evil, from prophesying, judging, condemning, counseling, influencing or being influenced erroneously" Manual, Art. VIII, Sect. 1.

These words had long been familiar to me. I knew them by heart. Wanting to be obedient, I went over them frequently, if not daily. One day, though, I realized how far my practice fell short of real obedience. Not only did I review this rule less than daily, but my obedience to it was less than real doing. After all, one could read a recipe all day, know it by heart, repeat it over and over, but that would never make or bake the cake. The instructions must be carried out or there's no end product.

Then, how could I do a better job of actually watching and praying to be delivered from doing all those things erroneously? As I listened to divine Mind for an answer, it soon occurred to me that when I was a child learning arithmetic, I wanted to be delivered from adding and subtracting, multiplying and dividing, erroneously. And how did I achieve that? By constantly practicing the right method. And the more adept I became at adding and multiplying rightly, the more thoroughly I was delivered from performing these functions wrongly.

That seemed logical. Perhaps, then, there was a right way to prophesy, judge, condemn, counsel, influence and be influenced. So I searched Concordances to the Bible and to Mrs. Eddy's writings and found that there are indeed right ways of doing all these things, as well as warnings against doing them wrongly.

Special insight, with practical results, came from the study of prophesying, and I'll expand on that shortly. But first, let's consider judging. Christ Jesus gives a vital directive in a single sentence: "Judge not according to the appearance, but judge righteous judgment." John 7:24. Don't judge according to outward appearances, he warns us. That, surely, would be judging erroneously. But how often we tend to do this without realizing how deceptive appearances are! The physical senses, which have no intelligence or knowledge of God's perfect creation, cannot tell us what's actually true of anyone or anything. So judging on that basis is false judgment.

To "judge righteous judgment" we need to plunge beneath surface appearances. This demands the spiritual assessment that asks: "What is spiritually true of this situation? What does God know of it? How does He judge it?" Being watchful to judge from this standpoint, keeping our thought on the absolute spiritual reality of perfect God and His unflawed, spiritual creation, we're delivered from the constant temptation to judge erroneously.

Condemning was an interesting one. It seemed so negative that I expected to find only warnings against it. But no. My research revealed Jesus' strong condemnation of hypocrisy, materialism, sin of all kinds. And Science and Health by Mrs. Eddy warned that if we fail to condemn evil we're actually nurturing it. See Science and Health 448:5-7. To avoid nurturing evil, then, we must condemn it—not as a fact but as a falsity. This is condemning rightly.

The wrong condemning we need to be delivered from is condemning persons. Jesus' example is so clear. He didn't condemn a diseased or insane or sinful person. He condemned the disease, the insanity, the sin, rebuking the devil, or evil, while healing and restoring the individual. When we're alert to condemn evil in the most thorough way possible—by affirming with conviction its powerlessness, unreality, utter nothingness, and its separateness from the true nature of anyone or anything—we're delivered from condemning persons and thus condemning erroneously.

Counseling. Today's society is filled with counselors—psychological, academic, marriage, financial, career, legal, and so on. People are used to getting lots of human advice. Some of this may be helpful, some not. How can we tell? And if someone asks us for advice, how do we know if we're counseling rightly or wrongly?

One way is to check to see if we're giving merely a human opinion. Science and Health has a good deal to say about personal opinions, and there's not much favorable comment! Perhaps such opinions would fit what the Psalmist calls "the devices of the people." "The Lord bringeth the counsel of the heathen to nought: he maketh the devices of the people of none effect. The counsel of the Lord standeth for ever, the thoughts of his heart to all generations." Ps. 33:10, 11.

"The counsel of the Lord" is the only absolutely trustworthy counsel. And we can be sure we're counseling rightly when we turn someone to God and point out His laws and the rewards of obeying them; when we give assurance of the one supreme Mind always guiding its own ideas unerringly and of the individual's God-given ability to hear and respond to this guidance. When we counsel in this way, we're delivered from the temptation to push our personal opinions and thus counsel erroneously.

Influencing. If the world is full of counselors, it's even more full of influences. And these are more subtle. They're often mental and unseen. We may not always realize our influence upon others. Even if it's quite unintentional, it's still an influence. And if it's a wrong one—matter-based or sense-oriented, self-willed or opinionated—it's to be avoided. The remedy is to be sure we're influencing rightly by doing good, actually embodying good by living more consistently as the very evidence of God. As Science and Health puts it: "Your influence for good depends upon the weight you throw into the right scale. The good you do and embody gives you the only power obtainable." Science and Health, p. 192.

And what about being influenced? Being ignorant of or apathetic about the subtle or aggressive suggestions permeating the atmosphere of human thought is allowing ourselves to be influenced erroneously. The Church Manual includes a daily duty to defend oneself against "aggressive mental suggestion." See Manual, Art. VIII, Sect. 6. One way of doing this is to acknowledge no other mind but the one infinite Mind, God; to realize that because there's only one Mind, there's actually no aggressive mortal mind to suggest or to malpractice, nor is there a susceptible mortal mind to be influenced by such suggestion or malpractice.

One could read a recipe all day, know it by
heart, repeat it over and over, but that would
never make or bake the cake. The instructions
must be carried out or there's no end product.

As we recognize that the only influence we can really be under is the Christ, the divine influence always present in every human consciousness everywhere; as we accept that Christ is the divine message from God always telling us what's true about ourselves and everyone else, we're delivered from being influenced erroneously.

Now back to prophesying. To fear the future, to expect some harmful outcome, to brood over what ifs?, to predict any development of evil, would be to prophesy erroneously.

A prophet sees spiritually. With the lens of Christian Science, he sees through material appearances and beholds spiritual facts. So doing, he witnesses the progressive disappearance of the material sense of things as he becomes more and more conscious of what is divinely true. And thus he's being delivered from prophesying falsely and from its consequences.

I felt uplifted and enlightened by this research and the insight that had prompted it. It gave me a way of more fully obeying the admonition in "A Rule for Motives and Acts." And that rule has glowed with a new light for me ever since.

A week or two after my study I found myself suddenly besieged with all the symptoms of a very heavy cold or influenza. "Oh no, not again!" I reacted, as the prospect of an all-too-familiar pattern of suffering flooded my thinking. But immediately came the realization that this was prophesying erroneously—predicting the development of evil. And the remedy? Be a true prophet. Be a real, spiritual seer. Hold consciously to the "facts of spiritual Truth" until I witness the disappearance of this painful, disruptive, material sense of my being.

Immediately I started claiming spiritual facts—like my eternal relation to my Father-Mother God as His likeness, therefore spiritual, not material. As such I was unavailable to any influence from popular beliefs in contagion or susceptibility to weather conditions, from medical concepts about patterns of development and duration of diseases, and so on. The only influence I could really be subject to was the Christ, the divine presence always speaking to my consciousness, telling me of my unassailable perfection as God's image, of my harmony, my health, my wholeness, right here, right now; telling me that these facts are the truth for everyone, everywhere.

I don't remember the exact reasoning that came to me, but it was along these lines, and it was expressed in vigorous affirmations of truth and denials of error. I wasn't about to put up with error's imposition. I persisted in this prayer for a few minutes. I was becoming more of a true prophet, more of a spiritual seer.

In not much longer than it has taken you to read these lines I felt the symptoms receding until I was completely free, and I remained so. That false, material sense of me had disappeared "before the conscious facts of spiritual Truth." By being something of a true prophet, I'd been delivered from prophesying the development of a pattern of suffering and from the consequences of such false prophecy. It's a healing I've always remembered with great gratitude for the Rules Mrs. Eddy has given in the Manual.

Everyone has the right and privilege to be a true prophet, a righteous judge, an alert condemner of evil, a spiritual counselor, a purifying influence. And then he'll find himself under no lesser influence than the Christ. And he'll be obeying "A Rule for Motives and Acts" in a meaningful, practical way—a way that heals. 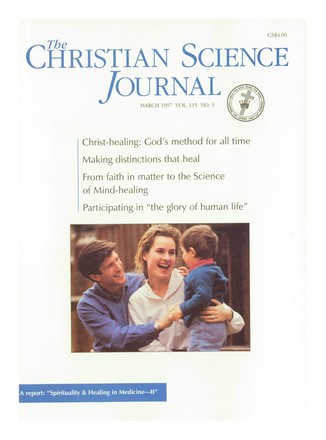 Christ-healing: God's method for all time

The crooked made straight

From faith in matter to the Science of Mind-healing

"That dear, dear one"

Prayer of the child Isaac*

To avoid doing it wrongly, do it rightly

Miscellaneous Writings— a book with a vital purpose

Participating in "the glory of human life"