In the book of Genesis, through the account given of Abraham and Sarah’s life, we gain an important insight about the one God from the most unlikely person—Hagar. Hagar was the handmaid of Sarah and from a polytheistic culture, yet her experience teaches us about the ever-present nature of God and His impartial love.

Abraham had received a promise from God that his descendants would inherit the land of Canaan and become a great nation. However, he had no children himself, and as the years passed, the prospect of offspring from him and his wife Sarah became less likely in their minds. Believing she was past childbearing age, Sarah, who was well aware of God’s promise of an heir for Abraham, decided to intervene. In her well-intentioned desire to see God’s promise come true, Sarah offers her handmaid to Abraham in order to procreate an heir. He accepts the offer, and Hagar soon becomes pregnant (see Genesis 16).

Realizing her position in the household was now much elevated due to her carrying Abraham’s heir, Hagar treats Sarah with contempt. Angered, Sarah mistreats Hagar so harshly that Hagar soon runs away. Out in the wilderness, pregnant, and far from home or any supportive friends, this young handmaid despairs of what will become of her and of what will become of her unborn child. In that moment of isolated distress, “the angel of the Lord found her by a fountain of water in the wilderness,” and Hagar receives answers to both concerns.

To the first concern of what will become of herself, she receives the message to return to Sarah. Clearly, Hagar was being taught a lesson in humility, patience, and love. To the second concern of what will become of her child, she receives the message that her child will survive. He will be called “Ishmael,” which means “God hears,” and she will have many descendants.

This young slave girl has experienced the immediacy of a responsive God, and she knows it is something special. The intimate moment must have been unlike anything she had ever known from her days in Egypt, a polytheistic culture that worshiped gods of the sun and moon, idols in temples, and even Pharaoh himself. But here in the wilderness, alone and in despair, she finds a God very near to her, as near as her thought. As a result of this encounter, Hagar has her own epiphany, and she puts it into beautiful words. You can hear the awe in her voice as she simply says, “You are the God who sees me” (Genesis 16:13, New Living Translation).

What a revelation for this young woman! She recognizes the presence of an all-knowing and all-seeing God who knows us as His own, and never forsakes us. What comfort this mother-to-be must have taken in the messages about her son and future descendants.

Hagar was obedient to God’s directive. She did go back to serve Sarah, and she went on to give birth to Ishmael, who would become the father of a nation. There were troubles ahead, and Hagar would again have the opportunity to appeal to this omnipresent God, but she had learned to trust God’s plan as a result of her unique experience in the wilderness.

In Science and Health with Key to the Scriptures, Mary Baker Eddy describes this phenomenon of God making Himself known to us when she writes, “Christ is the true idea voicing good, the divine message from God to men speaking to the human consciousness” (p. 332). Hagar witnessed this God-connection some four thousand years ago, but it is no less likely to occur today, for how could time restrict God’s Christly message?

Those were not my words. It was as if someone had thrown cold water on me. The Christly truth I had been shown was that I could not be a victim of some lurking incorrect thought or false concept of man. I was forever in the presence of the truth that I was a spiritual child of a loving Father-Mother creator. In the presence of Truth, error must vanish like the darkness before the sunlight. The illness vanished, and I read from the desk with no ill effects.

On another occasion I was out jogging with my dog, Nellie, on a middle school track a half mile from my home. It was an evening in early July, and someone nearby suddenly started lighting off fireworks. Nellie took off running scared in a direction toward a busy street and an unknown neighborhood. I chased her but couldn’t keep up with her, and, coming around a building, I lost sight of her. Like Hagar, I had two immediate fears come to mind; I was afraid about Nellie’s safety with all the car traffic around, and I worried about her ability to find her way back home.

Immediately and without any prayerful prompting, an unbidden message came to me in words from one of Mary Baker Eddy’s poems: “Lead Thy lambkins to the fold, / Take them in Thine arms” (Poems, p. 14). No other words could have fit the situation more perfectly. The fear vanished from my thought, replaced by a supreme confidence that Nellie was in the protective care of the one Almighty God.

I jogged back home, got in my car, and returned to the area to search for Nellie, and I held to those comforting words that had come to me. Eventually I decided that my car search wasn’t necessary; that God would lead Nellie home and, in the meantime, she was safely in His arms. I returned home, drove into my garage, and got out of the car—and there she came trotting up the driveway. She was home.

What stands out to me about my two experiences is how they demonstrated Hagar’s magnificent recognition that “you are the God who sees me.” God was very near in these events. He wasn’t a far-off God that I had to go to physically; He wasn’t a God that needed me to plead with Him before He came to my aid. He was right there, a very present help in trouble, ready, and supplying whatever was needed. 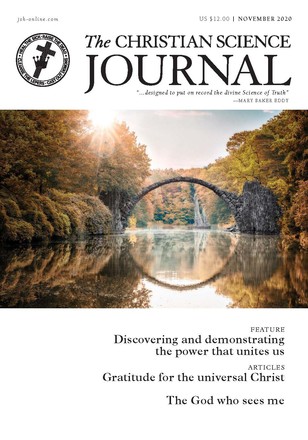 Discovering and demonstrating the power that unites us

Gratitude for the universal Christ

Keepers of the light

The safe—and healing—haven of faith

The God who sees me

Only one I am in the room

“Undertaken for the glory of God”*

Free and active after a fall

Joy and gratitude for study and healing

The turbulence of this world finds nothing in me . . . or you

God’s will—only the best for His children