A Christian Science lecture is about healing. It’s about healing of all kinds, from physical healing and a whole new sense of what’s possible, real, and good, to hearts set on fire for the power of God uplifting all humanity. (See last year’s article in the August Journal to find out more.)

While it might seem as though a lecture is the cause of healing, I’ve come to see lectures more as the effect of the healing Comforter, which Christ Jesus described as the spirit of Truth that would teach us all things, guide us into all truth, and remind us of everything he told us (see John 14—16). This Comforter is constantly lifting everyone, everywhere, to new views of God and reality. Mary Baker Eddy identified it as divine Science, the Science of Christ—an explanation and understanding of God with us, reaching all humanity. The Comforter is the true impetus of the lecture and of the healing that comes from it.

For example, instead of launching lecture preparations from the standpoint of typical event planning—figuring out the date, venue, person giving the lecture, advertising, etc.—we can begin by prayerfully listening for what God is calling us to see and do. I’d equate this to living a healthy lifestyle by staying in close communion with God and letting our activities grow from God-given inspiration and direction rather than by focusing on things like diet and exercise. We need to choose a date and venue for the lecture, just as we need to eat and be active, but these are not the source or cause of health or a healing lecture. So we should be alert to subtle tendencies to rely on them as the source of anything good. They are simply avenues by which the good of God will naturally take shape in the most useful ways as we’re focused on how the spirit of Truth is moving us.

Understanding that the impetus of the lecture activity is the Comforter also helps us see that we are all needed in this activity. It can be tempting to think that the responsibility is on someone else’s shoulders, or that we don’t have much to contribute, or aren’t able to contribute, anyway. But giving a Christian Science lecture isn’t really about any one person, be it the lecturer, the chair of the lecture committee, or those who have specifically signed up to help. The Science of Christ applies to everyone equally and can be experienced by everyone, because this is the nature of a science: A science has no hierarchy; its principles apply to everyone equally. If we accept the temptation to believe that someone else has more access to the Science of Christ, is more worthy of it, or is more capable of experiencing it, then we start to lose our sense that it’s a science. And to the degree that we lose our sense it’s a science, we lose our sense of the Comforter, because that’s what the Comforter is—the revelation that Christ is come to humanity in this universal, understandable, able-to-be-experienced way. So we can all be listening for our role in offering a lecture in our community, and recognize the essential value of that role.

Seeing more of the universal nature of the Comforter also helps uplift our perspective of our neighbor. And what we think about our neighbor has a direct impact on the kind of audience we’ll have at a lecture. A God-derived perspective shows us that every child of God—everyone in creation—is inherently made ready for what is good and true, and is receptive and responsive to the spirit of Truth. So, when we advertise or invite someone to a lecture, we’re not inviting an “outsider” so they can get something they don’t already have. We’re inviting a child of God, inside the eternal scope of divine Love, to the one and only place a child of God wants to be most: a gathering where ideas relating to the reality of God and the discovery of the Comforter will be explored and experienced.

Bearing witness to the facts of the universal nature of Truth, including every individual’s relationship to Truth, is needed and blesses our neighbor whether or not that person ends up attending the lecture. We’re witnessing the reality that the Comforter is come to all humanity, and that the “kingdom of God,” as Jesus referred to it, really is within each of us. We’re living the spirit of Truth that determines the success of the lecture. And the lecture will reflect that, in one way or another.

The members of the Board of Lectureship gratefully join with you in this important aspect of the Christian Science movement—offering lectures on Christian Science in communities all around the world. And more broadly, we’re grateful to be journeying forward with you in our daily discoveries of the Comforter and the good news it brings all humanity.

In accordance with Article XXXI, Section 1, of the Church Manual, the Christian Science Board of Directors has elected the following members to serve as lecturers from July 1, 2017, through June 30, 2018.

Then Philip went down to the city of Samaria, and preached Christ unto them. And the people with one accord gave heed unto those things which Philip spake, hearing and seeing the miracles which he did. For unclean spirits, crying with loud voice, came out of many that were possessed with them: and many taken with palsies, and that were lame, were healed. And there was great joy in that city. 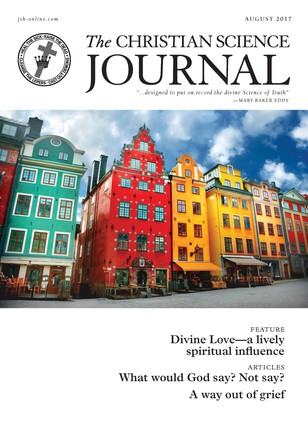 Why does the world need Christian Science Reading Rooms?

What would God say? Not say?

A way out of grief

The good and true news

Prayer for a church’s revival

Homesick? Or right at home?