The dance was only a few days away, and things weren’t looking good. I was putting on the eighth grade dance for the middle school where I work, and with so many details still not coming together, I was feeling burdened.

One morning before school, I committed some time to earnest prayer. At first, all kinds of justifications for why I faced a problem whirled around me. But as I prayed, a gentle message came to me—to “let.”

Let? To me that meant yielding. It meant allowing myself to see God’s harmony—relinquishing a sense of personal responsibility. God was in charge, and I needed to let myself see that.

So I looked up passages in Mary Baker Eddy’s writings that used the word let. I found several that helped me, including: “St. Paul wrote, ‘Let us lay aside every weight, and the sin which doth so easily beset us, and let us run with patience the race that is set before us;’ that is, let us put aside material self and sense, and seek the divine Principle and Science of all healing” (Science and Health, p. 20); and: “Let us rid ourselves of the belief that man is separated from God, and obey only the divine Principle, Life and Love. Here is the great point of departure for all true spiritual growth” (ibid., p. 91).

As I read passage after passage about yielding to God, and began to feel the weight of what those words meant, the sense of personal responsibility for the dance just melted away. I was so grateful.

At the time I was also serving as Second Reader in my branch church. The following Sunday I read the story of Adam and Eve, and thought about the part where the serpent talks Eve into eating the forbidden fruit, which is often depicted as an apple. Then, as the First Reader read passages from Science and Health illuminating the story’s meaning, something clicked: The serpent tempted Eve to be “wise” (see Gen. 3:6)—to make her own judgments, rather than turn to God for understanding.

I realized I’d fallen prey to the same temptation regarding the upcoming dance. I was using my own human wisdom to assess the situation, and in the process, I had built up a mental wall that clouded my understanding of the reality of God’s harmonious government.

I realized that if I gave any weight to human opinions, then I was falling into the same trap Eve had and would inevitably know both “good and evil” (see Gen. 3:5). And that’s when I received a clear mental instruction: “Don’t bite that apple!”

The informality of that language—compared with the language of the King James Version of the Bible, from which I’d been reading—caught my attention because it struck me as pretty funny. But then I thought of the implication: We always have a choice. We never have to bite the apple, which claims God’s creation isn’t wholly good, despite His having declared it so (see Gen. 1:31). And because I’ve come to understand that the story of Adam and Eve is actually an allegory, it occurred to me that there was really no apple to bite. In God’s good creation, there is no evil. As God’s idea, man actually never bit the apple.

During those final days of preparation for the dance, “Don’t bite that apple!” became my motto in everything I did. I refused to give in to any temptation that argued that something besides God, good, was in charge. I witnessed the decorations, food, and other preparations come together in ways I never could have outlined, and even watched myself let go of some opinions I’d been harboring. 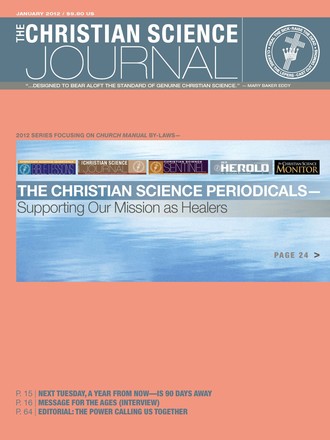 In raising the dead, they return to our state, do they not?

How can I reconcile that statement with the third tenet of Christian Science, which acknowledges God’s forgiveness of sin?

Why do we call certain things "bad" and other things "good"?

Are you ‘comfortable’ in church?

As a youth-focused lecturer

Could you please talk about handling resistance to Christian Science as a part of treatment?

Next Tuesday, a Year from Now—Is 90 Days Away

Message for the ages

On the wings of healing