Many are at least somewhat familiar with the biblical account, beginning in Exodus, of Moses leading the children of Israel out of bondage in Egypt toward the Promised Land—Canaan, promised by God to Abraham, who would be made “a father of many nations” (see Genesis 17:1–8). All along the way God guided the children of Israel, protected them, fed them, and taught them about His nature and relation to them. He gave them the Ten Commandments, and heeding these commands was key to claiming the Promised Land and receiving God’s blessings.

Shortly after I became an earnest student of Christian Science, there came two years of overlapping trials (health, financial, and other difficulties). It seemed overwhelming, but the experience of the children of Israel encouraged me. During their forty years in the wilderness, God never left them, but was right there with them each step of the way, sustaining them through their hardships, abolishing their fears, correcting their missteps, teaching them the joy of obedience, and showing them His glory.

After Moses had freed the Israelites from Pharaoh and led them close enough to Canaan, he sent twelve spies (one from each of the tribes) ahead into Canaan on what turned out to be a forty-day reconnaissance mission to “see the land, what it is” (see Numbers, chaps. 13–14). Upon their return, all twelve agreed it was indeed a land flowing “with milk and honey.” But there the unity ended. Even though all twelve had looked at the same land, they didn’t all see it in the same way.

Two of the twelve—Joshua and Caleb—were in favor of going into the land, illustrating a trust in God’s promise, “I send an Angel before thee, to keep thee in the way, and to bring thee into the place which I have prepared” (Exodus 23:20). But the others were afraid to go in, reporting that the inhabitants of the land they had searched out were giants, and this caused the children of Israel to murmur against Moses.

As a consequence, the children of Israel wandered in the wilderness forty years—one year for each of the forty days the spies had explored the land—and many of them perished before reaching the Promised Land. Eventually, it was Joshua who led the people into Canaan. “Of old the children of Israel were saved by patient waiting,” Mary Baker Eddy writes (Retrospection and Introspection, p. 79). Step by step, they grew in spiritual understanding and appreciation of the Ten Commandments, which enabled them to drop, one by one, doubts, fears, and limiting beliefs hindering their advancement. Forty years it took them; and while many of those who ultimately made it into the Promised Land hadn’t yet been born when the journey started, the children of Israel didn’t give up. Then finally, fearlessly and eagerly, they went on in.

There are many lessons we all can learn from the children of Israel’s experience that can inspire us today and save us from “wandering” for many years on our own life journey—lessons that can help lead us from a material sense of existence to the understanding of man’s true being as spiritual, harmonious, and immortal.

For instance, after being freed from Pharaoh, the Israelites weren’t immediately in possession of the Promised Land. There was a wilderness before them to conquer first. Don’t we all have a “wilderness” to overcome—limiting human beliefs fraught with fear and doubt? But not one of us is without God’s help. From the children of Israel’s experience, we learn that God guides, protects, and provides for us—blessings that are realized as we are obedient to Him. I can’t begin to count all the precious lessons I’ve learned from the children of Israel that help me on my own sojourn “from sense to Soul,” as Hymn 64 in the Christian Science Hymnal describes it (Violet Hay, © CSBD).

Whenever I think on this whole account, a question comes to mind—one that grows more important and helpful to me the more I ponder it: What really is the Promised Land?

Relying on the spiritual sense inherent in each of us, we discern far more than material sense can ever report—we see our true, spiritual existence under God’s supremacy and government. We come to understand that the Promised Land is much more than a geographical place; it is a state of consciousness. As Christ Jesus preached and proved, the kingdom of heaven is here, now, and everyone has a divine right to citizenship in that spiritual kingdom, which is the Promised Land—a spiritual sense of harmony that has nothing to do with any geographical borders.

I feel sure Caleb and Joshua must have glimpsed something of this. Certainly Caleb was already demonstrating in some degree the underlying truth of God’s government through overcoming human beliefs of aging. A few years after the children of Israel had entered the physical land they’d been promised, Caleb (then eighty-five years old) noted he was just as strong as he had been when Moses sent him to spy out the land over forty years earlier (see Joshua 14:10, 11).

All through the Bible, health, happiness, and prosperity are linked to people turning to God and coming to understand more about God’s nature and our relation to Him. How much we can learn from these accounts that save us so many steps! God’s law of Love draws our thought closer to our creator; silences our fears and doubts; purifies and gladdens our hearts, and fires them with courage; and speeds our Godward efforts.

I like to think of each of us as a child of Israel in a broader, spiritual sense—as defined in Science and Health with Key to the Scriptures by Mary Baker Eddy: “Children of Israel. The representatives of Soul, not corporeal sense; the offspring of Spirit, who, having wrestled with error, sin, and sense, are governed by divine Science; some of the ideas of God beheld as men, casting out error and healing the sick; Christ’s offspring” (p. 583).

Through the divine Science of Christ that God revealed to her, Mrs. Eddy saw and experienced a higher, more expansive sense of the Promised Land. Speaking of her own spiritual progress, she wrote, “I saw before me the awful conflict, the Red Sea and the wilderness; but I pressed on through faith in God, trusting Truth, the strong deliverer, to guide me into the land of Christian Science, where fetters fall and the rights of man are fully known and acknowledged” (Science and Health, pp. 226–227). And Science and Health defines wilderness as follows: “Loneliness; doubt; darkness. Spontaneity of thought and idea; the vestibule in which a material sense of things disappears, and spiritual sense unfolds the great facts of existence” (p. 597).

Both of these passages were so helpful to me in my own “wilderness” experience referenced at the beginning of this article. What spoke to me in the definition of wilderness in Science and Health was that word “vestibule.” I realized that no one stays in a vestibule permanently (though you may leave your muddy boots there!), so that was promising. I kept listening for thoughts from God, and they came, reminding me I wasn’t doing this alone.

Step by step (thought by thought), some “great facts of existence”—truths of God’s ever-presence and all-power—became clearer. I felt God’s love and omnipotence and felt safe. The more real God became to me, the less overwhelming the problems seemed. Soon came the tipping point—the day when God’s limitless love was more to me than all human claims of lack put together, and all darkness of fear and doubt left. Each problem was fully rectified.

It wasn’t easy, but looking back on it now, I wouldn’t trade that wilderness time for anything. All I took from this experience were its blessings, which still continue to this day.

The best of those blessings was the joy of getting to know God better and trust Him more and more. Day by day, I’m seeing that when our thought is turned to God, then our lives increasingly reflect the harmony of His kingdom, His reign, realm, and rule. I learned so much during this time. Most important, I understood that overcoming challenges through an understanding of God’s goodness is doable for anyone.

Thank you, children of Israel—each one of you—for the strengthening lessons learned from you that have saved me so many steps. 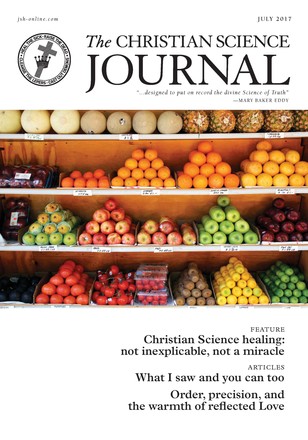 Christian Science healing: not inexplicable, not a miracle

Seeing and healing from God’s point of view

What I saw and you can too

Seeing matter for what it isn’t

A swimming lesson and an angel message

Order, precision, and the warmth of reflected Love

God’s way is the high way

‘The beauty of holiness’

Magnify the good and the real

Enduring lessons from the children of Israel

Psalm for the washing of feet

God’s presence in the Pacific Islands

‘I recognized my innocence’: attack of pain stopped