What warmth and affection are expressed in the words "loved ones"! The closeness of human ties is an expression of God's love and as such should constitute an undiluted blessing. Mrs. Eddy writes, "Pure humanity, friendship, home, the interchange of love, bring to earth a foretaste of heaven." Miscellaneous Writings, p. 100;

But too often this very closeness seems to bring with it a false sense of responsibility and fear for the welfare of those we cherish. When we believe that one we love is sick, in danger, or departing from the way of righteousness, the temptation is often great to think that because we are close to the individual it is difficult to overcome fear, helplessness, and the tendency to be impressed with the evidence before us.

This doesn't have to be so. Christ Jesus, who set the example for us all, had dear ones. He was able fearlessly to help and heal them.

When Lazarus fell ill, it was natural for his sisters to think of calling for Jesus, their friend and Master. "Therefore his sisters sent unto him, saying, Lord, behold, he whom thou lovest is sick." John 11:3; Jesus was apparently completely unperturbed by this news, indicating to his disciples that God and His Christ would be glorified through Lazarus' recovery. Jesus' delay of several days before going to his friend certainly wasn't evidence of callous indifference. It showed disbelief in the evidence of the material senses and absolute confidence in God's power over every circumstance and condition.

When Jesus came to the town where Lazarus lived and was told that his friend had been buried four days before, he went to the burial site and raised Lazarus to life.

Mrs. Eddy's comments on this healing give us valuable insight into the way that we too can effectively help those we love. She says in Science and Health: "Jesus restored Lazarus by the understanding that Lazarus had never died, not by an admission that his body had died and then lived again. Had Jesus believed that Lazarus had lived or died in his body, the Master would have stood on the same plane of belief as those who buried the body, and he could not have resuscitated it." Science and Health, p. 75;

Do we believe that a loved one is living or dying in a mortal body? Those friends and relatives who buried Lazarus apparently accepted the material view of man as a corporeal personality, having been born in the past, living tentatively in the present, but surely consigned to death in the future. This level of thinking never healed anything, and Jesus certainly did not base his healing on such an estimate of man. He identified others as he identified himself, as spiritual, the perfect image of the perfect God. On this high plane of thought he was able to overcome all ills, and even death.

Our ability to help those we love depends on our ability to see them as Jesus saw men. This is a God-given right that human closeness cannot hinder, provided we are aware of mortal mind's subtle attempts to limit our clear seeing and know how to recognize and overcome them.

One of these subtle suggestions comes as a burdened sense of responsibility. This is a temptation to believe that God is not the sole creator of all His children and that He is not fully able to care for His own. What a lie! Firm denial of this lie, the sure sense that God alone is responsible for the well-being of His creation and willingness to trust all to His care, frees us to see as Jesus saw.

Fear for the fate of a dear one is a suggestion that there is a power besides God that can resist Him and even defeat Him. To put an end to this falsehood, we must hold to the fact that God is All, the only power, keeping all His children always lively and whole.

Human sympathy would often try to undermine our clear view of God's man by plausibly disguising the suggestion that pain and discord are realities to be contended with. The conviction that God is the only creator, whose entire creation is good, including no pain or inharmony, allows us to be compassionate with the individual while resisting the temptation to sympathize with a discordant condition.

Some years ago I found myself faced with the picture of a child of mine in extreme pain. A Christian Science practitioner had been called, and treatment was being given. But as I sat on the edge of the child's bed, the evidence of distress seemed overwhelming. I picked up the Bible, knowing that I needed to resist the belief of pain and discord. Opening the book at random, I began to read aloud. It occurred to me that this might seem callous —sitting there reading Bible verses when my child was in agony—but I knew that the only way to really help the child was to see him as God's perfect son, as Jesus would have done.

So I persisted, shutting out all else, until the evidence of pain, though still obvious, ceased to disturb me and my thought was at peace. As I continued to read, the picture changed completely. Within a matter of minutes all suffering ceased and the child went to sleep. This condition was not diagnosed, but whatever it was, it never returned.

Jesus' words to those who witnessed his raising of Lazarus, bound with grave-clothes, were, "Loose him, and let him go."John 11:44. This could well be the Master's command to us, requiring that we loose our dear ones from the binding restriction of a false concept and let them go in God's omnipotent care, seeing them as His own sons.

In this way it is possible for us to be free from the intense claims of personal attachment that cloud our view. In joyous recognition of man's inherent freedom and perfection we can drop the material concept of man that would limit our usefulness to those we love.

Rather than separating us from our human friends and family, this approach strengthens the bonds of affection, makes us truer friends, better relatives, and broadens our sense of love until we can truly regard all mankind as our loved ones and help them all. 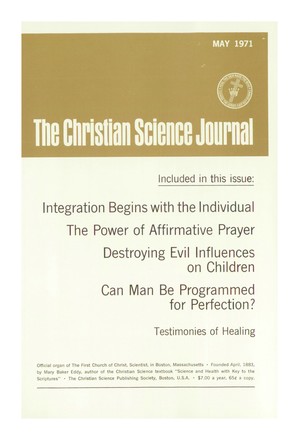 Integration Begins with the Individual

The Power of Affirmative Prayer

How Class Teaching Helps in Healing

Helping Our Loved Ones

Can Man Be Programmed for Perfection?

"The accuser is not there"

Improving Our Lines of Communication

An Introduction to the New Testament

The Annual Meeting of The Mother Church Will Convene at 2 p.m. Monday, June 7

By The Christian Science Board of Directors | May 1971

"To avail ourselves of God's rule"

Keeping Up to Date

I shall ever be grateful for the privilege...

By William Eugene Graham with contributions from Jean S. Graham | May 1971