Toward the end of last year The Boston Parents' Paper presented a panel discussion on "Nurturing Spirituality in Children" in the Sunday School auditorium of The First Church of Christ, Scientist (The Mother Church), in Boston. On the panel were religious educators from six different faiths, who were invited to tackle such questions as "Where do spiritual values come from?" and, "How do we share them with our children?" Our Features Editor, Kim Shippey, offers some observations on the discussion, which was the second in a series being planned for the Boston area.

In welcoming the panelists and the audience, host Christine Herlinger, Superintendent of the Mother Church Sunday School, spoke with gratitude of the increasing interest in spirituality in the world today. "It's important," she said, "for all of us to be a part of the ongoing dialogue about what spirituality is, and how we can find it. We learn so much from listening to what other people have found in their search.

"There are so many parents," she observed, "who are yearning deeply for the spiritual and moral education that gives us the ability to make right decisions and find healing solutions."

"What is important in developing and maintaining spirituality in a family," said Betsy Weaver, publisher of The Boston Parents' Paper and moderator of the discussion, "is a full realization that children come into the world with a strong sense of what is good and what is right. And parents can learn a lot from them, even as they guide them. If the family belongs to a structured, caring religious community, that usually makes things easier."

She emphasized how important it is for children to have good role models. 'And no one can do that better than parents who show consistently that they care about each other and are important to each other."

"Spirituality is very much about the search for meaning—not in the immediate sense, but in an ultimate sense," said John McDargh, associate professor of theology at Boston College. "It's about finding a way of understanding how we fit in, how we're connected to what is really good, true, beautiful, enduring.

"My greatest teacher is my six-year-old adopted Russian son Sasha," he continued. 'Already at six he's trying to figure out what kind of world he's growing up in. 'Who's there for me? How do I relate?' Six-year-olds are pint-size theologians," suggested Professor McDargh. "They are trying to figure out how the world coheres . . . and they do it with wonder—a sense of awe."

Awe was the word also used by Rabbi Herman Blumberg of Temple Shir Tikva in Wayland, Massachusetts, as one of the spiritual values he rated most highly. "Children should be encouraged," he said, "to look at the world with a sense of awe. If they examine a flower or an insect or go to the beach, there is room for awe if only they open their eyes and their hearts to it."

He also spoke of the importance of kindness and humility. "Children need to understand that they are not at the center of the world. We all need profound humility—to bow our heads before God. That is the beginning of spirituality. Parents have to see themselves as spiritual teachers," he added. "But that involves developing their own spirituality so that they have something to articulate and to model."

"True spirituality is not taught in isolation," insisted the Reverend Tina Saxon, founder and pastor of the Disciples Baptist Church in the Bromley Heath housing development in Boston. "It cannot be separated from church or from God. It needs to be fostered in relationships.

'As children," she recalled, "we were exposed to a lot of religion! My grandmother taught me at the age of six that life was more than just the body; that there is a spirit that guards us and is part of us; that there are goodness and righteousness in life that come from the spirit within. I was brought up on the Bible, and I still believe that all that we are comes from God."

Anne McCauley, director of Camp Newfound, a summer camp for Christian Scientists in Maine, and the mother of two young daughters, spoke of her gratitude for Sunday School and what she had learned there of the laws of God. "We were taught to see Jesus as our highest example," she said. "I trusted in the sense of good that he represented, and that was really the foundation of my spirituality as I grew up.

"Now, as a parent, I've learned that communication must be kept open. There needs to be a constant conversation. There cannot be a moment in our day when we don't capitalize on the principles we want to share with our children."

Betsy Weaver spoke of these as "golden moments." "We need to be there for our kids, and to talk to them as things come to mind," she said, "but the special moment comes when they raise a question, and we have the opportunity to listen carefully and answer them straightly, honestly, and openly. It's such a gift to have children," added Ms. Weaver, "and, in my case, they are the ones who allow me to experience and know my spirituality."

The role of children as teachers was clarified by Farideh Oboodiat, who is an assistant professor in the Department of Elementary and Early Childhood Education at Bridgewater State College in Massachusetts, and belongs to the Baha'i faith. She said that her experience of teaching in many different countries had convinced her that adults can learn wonderful lessons from children.

"In most religions," she said, "it's accepted that children are close to the kingdom of God . . . because of their pure hearts. They can identify goodness better than most of us. Even the so-called 'at risk' children with whom I have worked have loving, pure hearts that are without prejudice. They are searching for the truth. When teaching morality" she added, "we should go for the positive part of it first. Not what not to do, but what to do—encouraging children to be gentle, kind, and sharing."

Dr. Syed Asif Razvi is a surgeon who has served as president of the Islamic Council of New England. "For true spirituality, one has to have faith in a Supreme Being — whom most of us would call God," he said. "My most spiritual moments are when I pray and I know that there is nobody between myself and God."

He explained that when he was growing up in India many years ago, he did not have religious training. But once he and his wife started a family in the United States, religious education became a necessity for all of them. "I began studying religion only ten years ago," he said, "and I learn something new every day!"

Rabbi Blumberg emphasized how much there is to learn from religious communities different from our own. "It's beautiful to have the variety," he said. "It helps us to see what makes us unique, and gives us the self-confidence and self-assurance to reach out in unity to people who are totally different from us.

"I would define spirituality," he said, "as the ability to touch that which transcends me as an individual. And to be in touch with what is the essence of my life, the life of others, and the world around me — touching that which is holy, which is pure. I believe that the task of religion — of systems of worship — is to point us toward the spiritual, toward God." 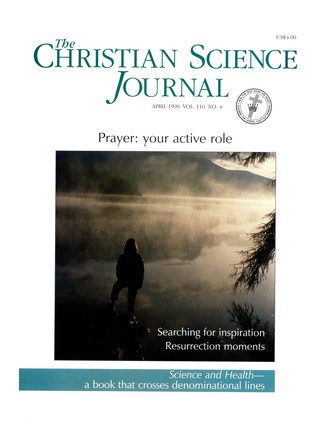 Prayer and fasting prepare us for healing

Does prayer ever harm?

"I can't give up on miracles!"

Science and Health— a book that crosses denominational lines

"...assurance and encouragement" from Science and Health

The mighty works Feeding the hungry and walking on water

No hour unclaimed by God

What are we doing for heaven's (harmony's) sake?

What occupies your thought?

Biblical women: portraits of our heritage