I had been looking forward to my lecture trip to Lomé, Togo, for months. Now, finally belted into my Air France seat and on my way to Africa for the very first time, I wasn’t feeling well at all. I hadn’t slept much the night before and was dealing with general flu symptoms, so I tried to take a good nap as the plane took off.

Although I wore my noise-blocking headset for the next few hours, my sleep was frequently interrupted by the muffled sounds of conversation around me. I don’t think I have ever been on a flight with so many happy people. The plane was full of Togolese, all of whom seemed to know one another and were returning home for the Christmas holidays, talking, laughing, and passing plump, contented babies around from seat to seat. The man sitting next to me appeared to be somewhat of a celebrity. Many of the passengers recognized him and stopped by to chat. In between their conversations I noticed my seatmate intently reading from the books of Psalms and Proverbs, and from the New Testament.

A few hours into the Paris-Lomé flight, I still felt poorly. I pulled off my headset for the first time since the flight began in order to engage a bit with what was going on around me. Before the earphones ever touched my lap, my seatmate asked, “Is this your first visit to Togo?” And the conversation began.

I learned that he is a mayor of Lomé, the capital of Togo. Lomé is a large city, spread out over many miles, bubbling and brimming with colorful life. This bustling community has an assistant mayor for each of its five sectors to keep up with the day-to-day running of the city. My new friend was one of those five. He learned that I am a Christian Science practitioner and teacher, visiting for the first time to lecture for a church organization he had not yet heard of—the Christian Science Society of Lomé.

Monsieur le Maire, as he would be addressed in French, is a church-loving Baptist, who knows his Bible very well. He shared favorite passages with me and I shared mine with him. We were both moved to think deeply and to discuss the spiritual meaning of many different verses in Scripture and their application particularly to prayer and healing. This spontaneous sharing lasted for more than two hours. Interestingly, every question he asked me about prayer was going to be covered thoroughly in my lecture. Just before we landed he asked if he could come to the lecture, which I was to give at the TMC Youth Summit at the Society the following Saturday.* Of course, he was welcome. As we stepped off the plane, I realized that I had been healed of the illness during our chat.

This man’s thirst for, and receptivity to, the universal message of the Christ, so evident in that first contact on the plane, was a foretaste of things to come. Upon my arrival at my hotel, a tall, slender young man in security insisted on taking my bags to my room. I felt they were quite manageable and tried every which way to get him to let me handle them myself. But he quietly continued on, carrying my bags and brushing off my protests. When we arrived at the room and had complete privacy, he inquired in French, “You are a Christian Scientist?” I am not sure how he knew this. I said, “Yes.” He then looked at me intently and said, “I want to know the Bible. I want to study Christian Science.”

I learned that he is a college student working part time at the hotel. He was unable to attend the Summit, so I put him in touch with the active Christian Science Organization at the University of Lomé and with a member of the local Christian Science Society. I also gave him a copy of Science and Health with Key to the Scriptures by Mary Baker Eddy to help him get started with his study.

The Summit was a great success. Both Tom McElroy, a Christian Science practitioner and lecturer based in Boston, and I gave lectures in French and English. There were also workshops in French and English conducted by members of the Society, and by TMC Youth and two other Mother Church staff. According to the local Summit organizers, the majority of the 293 people attending knew nothing or little about Christian Science. A number of healings, of both sickness and sin, were reported to have occurred during and immediately after the Summit.

Monsieur le Maire did come to my lecture at the Society, the first one I had ever given in French, squeezing it into his very busy schedule. He had ten marriages to officiate at during the rest of the day. But he came and listened intently, taking notes and asking sincere, astute questions. Before he left, he got his own copy of Science and Health. We plan to stay in touch to continue the conversation that began on our flight.

I could report on dozens of conversations and contacts made over the course of my five days in Lomé, each one illustrating the same things: a pure love of the Bible and the heartfelt desire to grow in the practice of effective, healing prayer. I would be pleased and ready to go back to Lomé at any time. God’s beautiful, radiant, happy children, with pure hearts hungering and thirsting after righteousness, are found everywhere there. 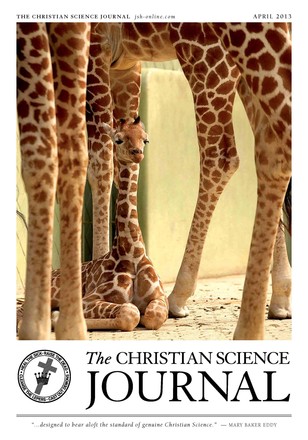 The new Concord—at your fingertips

God's man is not distracted

The sweetness of spiritual deepening

Even the simplest truth heals

A new member of the Christian Science Board of Directors

From the Christian Science Board of Directors | January 2013