A court is a place where judgments are made according to law, and depending on the caliber of the jurisdiction and the laws within it, these judgments are fair, unjust, or something in between. Most people are familiar with how a legal system operates in the human realm but may be less aware of how law applies in the realm of Spirit.

In Christian Science the concept of divine law as a spiritual reality is what makes this healing religion scientific. Terms such as justice, judgment, testimony, evidence, trial, and argument suffuse its teachings. The laws of Spirit enable us to heal—to prove that God, Truth, governs and maintains His creation, including us and our fellow man, in perfect health and harmony. Without divine law, we would have no divine Principle, or God, and thus no reliable basis for any healing work we may attempt.

At one time, I was struggling with a chronic physical problem that seemed to elude all efforts at prayer. During this time, I invested in the complete audio CD set of the Christian Science textbook, Science and Health with Key to the Scriptures by Mary Baker Eddy, with the idea of closely listening to the textbook during several long car trips I was then making.

Toward the end of one of these trips, I found myself riveted by a section in Science and Health that I had formerly skipped over. It comprised a trial, found on the last 13 pages of the chapter “Christian Science Practice,” in which a hypothetical case of illness is presented as if it were a case in court (see pp. 430–442).

Listening to this on a long stretch of highway, with nothing but the outline of pine trees against a night sky for company, I became aware of a simple and before unappreciated fact, which became a turning point in my own eventual healing: The healing in the trial allegory occurred after the case was removed in its entirety from the wrong court to the right one: from the Court of Error to the Court of Spirit. And I realized that I had been trying to solve my own problem in the wrong jurisdiction!

In the referenced allegory, a man is sentenced to death after selfless attendance at a friend’s bed of sickness. The arguments against him occur in the Court of Error, a decidedly biased venue in which the prosecutor, aka False Belief, asks the questions and is answered by a most unsavory group of witnesses: morbid secretion, death, coated tongue, to name a few.

Abruptly, and not a moment too soon, a defending counsel for the man arrives on the scene. This figure in the allegory represents Christian Science, and its ensuing vigorous defense of the accused ultimately results in a reversal of the sentence of death to life and health.

In the allegorical trial, when the case is removed to the Court of Spirit, indicating a sea-change in perspective, the smooth-tongued material witnesses begin to falter.

What struck me most about this was that none of the arguments presented by the defense counselor, Christian Science, take place in the Court of Error. Before spiritual truths are put into play, an appeal is made for the case to be tried in the Court of Spirit.

The importance of this shift in venue should not be minimized. Among other things, it signifies that in order to pray effectively, we must refuse to honor any witness who appears in the Court of Error. As I understand it, this court represents a material state of thought that is willing to admit and weigh the veracity of mortal testimony. Such false testimony may appear in the form of ruminations about a physical condition or media reports about it. Speculation about the duration of a health problem, or why it began in the first place, may seek to claim one’s attention.

If we give room to such thinking, we enter error’s jurisdiction, listening to the wrong stuff. We need to shut it all out. We have the ability to do this—to refuse to be imposed upon by false and misleading testimony. This pushback against wrong thinking is not an act of human will but the exercise of a divine right, since “it is man’s moral right to annul an unjust sentence, a sentence never inflicted by divine authority” (Science and Health, p. 381). The exercise of this right is, in effect, “casting down imaginations, and every high thing that exalteth itself against the knowledge of God, and bringing into captivity every thought to the obedience of Christ” (II Corinthians 10:5).

If we are struggling with an unhealed problem, it could signify that we have not entirely vacated error’s venue and are allowing ourselves to take in and be impressed by an assortment of false witnesses—stress, fear, physical symptoms, and material evidence. At times like these, instead of merely trying to dispose of error’s arguments, or contend against error, in our prayers for healing, we need to reject the claim that error exists in the first place. The only decision to be made in the Court of Error is to leave it.

In the allegorical trial, when the case is removed to the Court of Spirit, indicating a sea-change in perspective, the smooth-tongued material witnesses begin to falter. At times they interrupt the Counselor, Christian Science, and even attempt to have him disbarred. But it is clear that in the new environment these shenanigans won’t fly. In the new atmosphere, Truth is given voice. Man’s true spiritual identity is reestablished, and the false, material evidence put forth against him disproved point by point.

In this narrative, the analogy to the legal system as a battleground in thought is particularly powerful. Sometimes it appears that truth and error are battling for dominance in our consciousness. In our efforts to disprove error, it may attempt to intimidate us. We may feel that to challenge this suppositional authority will be an affront to the whole world around us—to material knowledge itself. As Science and Health says, “It requires courage to utter truth; for the higher Truth lifts her voice, the louder will error scream, until its inarticulate sound is forever silenced in oblivion” (p. 97).

This may sound as if we are under duress to defend ourselves when faced with demanding circumstances. And while we do need to do this, it must be emphasized that we are not alone in our efforts. In the allegory, the Counselor personifies Christian Science, not the individual in need of healing. Christian Science is representing us; we are not representing it.

We may appear to be arguing on our own—or another’s—behalf, but in reality we are simply becoming more aware of the spiritual truth of being that has always been active and governing. We witness this activity but are not responsible for its effectiveness or enablers of it in any way. It is divine Love that does the healing work. It is divine Love that lifts us into the Court of Spirit—into the understanding of the spiritual laws of being that protect, guide, and heal us. Like a kite rising, we are borne aloft by these truths and set free. It is this Love, God, that casts out fear and restores our health and peace.

Spiritual healing is not random, anecdotal, mysterious, or miraculous. It is the result of acknowledging, obeying, and demonstrating laws derived from a loving and just Principle, God. These laws can be relied upon with complete confidence. The allegory of the trial in Science and Health, with its vivid narrative of divine Love in action coming to our rescue, reveals the scientific basis of this healing process. It teaches us to reject error; to resist a false material sense of law or authority, and to make sure that we are praying in the right place, a mental locus that admits spiritual truth alone. When we do this, God’s infinite love brings us justice in the form of healing. 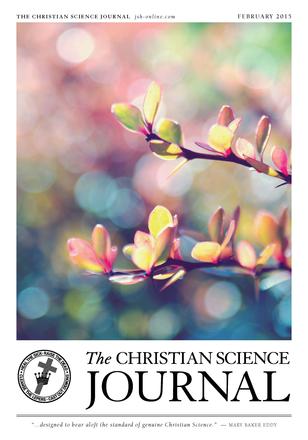