There’s a story about a town that was so small it only had one traffic light in the entire town. In fact, after some time the people of the town realized they really didn’t have a need for even that single stoplight, so they decided to have it removed. But in the first weeks following its removal, the town experienced its first traffic problems because half of the drivers, out of sheer habit, were still coming to a stop where the traffic light had been, even though it was no longer there.

We recently experienced something similar with respect to a small change in the printing of the Christian Science Quarterly Bible lessons. For decades upon decades there had been a small notice that served as a kind of traffic signal to help transition between the Responsive Reading and the Lesson- Sermon. It simply read, “The following citations comprise our sermon.”

As a practical matter in Christian Science church services, it is helpful to have the First Reader, who is charged with conducting “the principal part of the Sunday services” (Mary Baker Eddy, Church Manual, p. 31), include some such statement, indicating when the Lesson-Sermon is beginning. But as we looked into it, we found no evidence that Mary Baker Eddy wrote this particular sentence or wanted this precise wording preserved. However, because the Church Manual does specify that Readers “shall read all notices and remarks that may be printed in the Christian Science Quarterly” (p. 32), the only way to give Readers the freedom either to continue using this familiar sentence or offer an alternative statement that feels more natural to their own unique church setting, was simply to remove it.

But like the proverbial traffic light that was removed, it has left some Readers wondering what to do. A few Readers have questioned whether they may say anything to bridge that transition if it is not specifically printed in the Quarterly, as they naturally want to avoid making any “remarks explanatory of the Lesson-Sermon” (Manual, p. 32). But we all recognize the substantive difference between a transitional statement and an interpretive remark of explanation. Frankly, we’ve been heartened to hear some of the examples of how Readers working within their own church settings have found just the right way forward through Mind’s guidance.

The main thing, of course, is to give free breath to the spirit of the Manual By-Laws relative to conducting church services as we walk the path of obedience to the letter. What matters most is that every worshipper feel the spirit of universal love that motivates every aspect of our beloved worship services. Mrs. Eddy echoed that spirit beautifully when she wrote, “Forget self in laboring for mankind; then will you woo the weary wanderer to your door, win the pilgrim and stranger to your church, and find access to the heart of humanity” (Miscellaneous Writings 1883–1896, p. 155).

With gratitude and love,

The Board of Trustees, The Christian Science Publishing Society 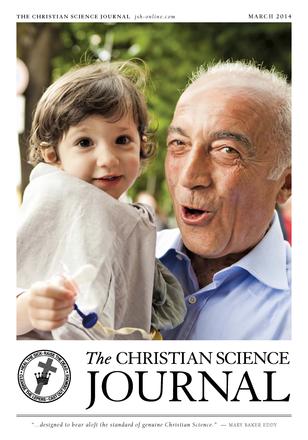 By The Board of Trustees, The Christian Science Publishing Society | March 2014

The Christly sympathy that heals

Spiritual education for all

Rising from a silent majority

By-Laws that sustain and support

Healed after a fall

If some Bible stories are fiction, does that take away from their value to us?

How can I do my job and see the true nature of my students?