THE Bible tells us in the second chapter of Daniel that Nebuchadnezzar, king of Babylon, had a dream that troubled him greatly. In this dream he saw a "great image" whose form was "terrible." The head was of gold, the breast and arms of silver, the belly and thighs of brass, the legs of iron, the feet of iron and clay. He also saw a stone that was "cut out of the mountain without hands." This stone smote the image on its feet, and broke them to pieces. Then the rest of the body was broken into pieces, "and the wind carried them away." The stone that destroyed the image "became a great mountain, and filled the whole earth."

The king asked Daniel to interpret the dream. In his interpretation Daniel designated the parts that composed the image as kings or kingdoms bearing "rule over all the earth." After he had analyzed the parts of the great image, had told the king what each part represented and shown that every part would be destroyed, the prophet gave to the king this wonderful prophecy about the stone that destroyed the image, as recorded in the forty-fourth verse of the second chapter of Daniel: "And in the days of these kings shall the God of heaven set up a kingdom, which shall never be destroyed: and the kingdom shall not be left to other people, but it shall break in pieces and consume all these kingdoms, and it shall stand for ever."

The image was composed of gold, silver, brass, iron, and clay. These five substances may be likened to the five material senses—sight, hearing, touch, taste, and smell. In her definition of matter, as given in the Christian Science textbook, "Science and Health with Key to the Scriptures" (p. 591), Mrs. Eddy says of it that it is "that which mortal mind sees, feels, hears, tastes, and smells only in belief." As the image composed of five parts was only a dream, so the five material senses are only a belief. Yet they seem to form images of sin, sickness, and death sometimes more terrible to mortals than the great image Nebuchadnezzar saw in his dream. These false beliefs rule mortals, and hold them in bondage until their unreality is demonstrated by the understanding of Truth.

Jesus said, "The stone which the builders rejected, the same is become the head of the corner," and, "Upon this rock I will build my church; and the gates of hell shall not prevail against it." Jesus built his church on the rock of Truth, which renders Christian healing possible. Through spiritual healing he proved the five material senses to be false, showing that their testimony is not to be relied upon. In the synagogue Jesus once saw one whose hand was withered. According to the testimony of material sense, the sense of touch had been lost. But Jesus knew the falsity of all material sense testimony, knew that no true sense could ever be lost; he also knew that all action is of God. To prove this he told the man to stand up and stretch forth his hand. He obeyed and was instantly healed of a withered hand. Luke says that "his hand was restored whole as the other."

When Jesus and his disciples were in a desert place, and a multitude of people, hungry and needing food, were with them, his disciples with the material sense of sight saw only five loaves and two fishes, while Jesus with spiritual sense saw an abundance to feed all. This enabled him to look up to heaven, break the loaves, feed the multitude, and have twelve baskets full remaining. His spiritual sense of sight thus overcame the material sense of limitation and lack.

Jesus restored sight to the blind, proving that so-called matter does not see, has no sight to lose, and that real sight is spiritual and can never be lost. He healed deafness, demonstrating that hearing is a divine faculty and cannot be lost. His daily work was to rebuke and destroy the seeming power of the material senses, and to restore spiritual sense.

Mrs. Eddy discovered the laws that governed spiritual healing and gave them to us in Science and Health. She brought to the world the truth about the material senses— that they are only false beliefs, and cannot therefore rule God's man, the real man. She taught the truth about man and his relation to God. This spiritual truth, as revealed in Christian Science, is the stone that "became a great mountain" and that is filling the earth and destroying the images of the material senses—limitation, sin, sickness, and death. The truth as given in the Christian Science textbook is uncovering and destroying the lies which say that man is made from dust, is governed by the five material senses, and must die and return to dust; and instead of this lie, truth as revealed in Christian Science is establishing by demonstration the fact that man is the image of God with dominion over all the earth, as is clearly set forth in the first chapter of Genesis.

Christian Science teaches men how to have dominion over the false beliefs of material sense. Spiritual healing is filling the earth; and today thousands who, like Nebuchadnezzar, were afraid of the "great image," material sense, are rejoicing in the truth that has made them free. Jesus was reviled, persecuted, crucified for the truth he lived and taught; but that truth lives to-day, and the gates of hell do not prevail against it.

When Mrs. Eddy established her church, error in many forms rose up to overthrow it; but every attempt to destroy it was a failure, for it was founded on the rock—on the truth. Error has repeatedly tried to stop or hinder progress in The Mother Church and its branches. Mrs. Eddy, knowing that error always tries to stay God's idea, in her God-given wisdom safeguarded every activity of her church with protective Bylaws. These By-laws, found in the Church Manual, have protected, and will continue to protect, The Mother Church and its branches.

Mrs. Eddy knew that her church had a great work to perform, and in her definition of "Church" she gives an outline of it (Science and Health, p. 583). That work is the mission of The Mother Church and its branches. And so long as any of the race needs uplifting, so long as the "dormant understanding" (ibid.) needs to be aroused, so long as there are devils to be cast out and sick to be healed, the work of The Mother Church and its branches will continue, even until the "stone" fills the whole earth.

Jesus relied wholly on God in his work of healing. He said he could do nothing of himself, and that it was his Father who did the work. Our revered Leader, Mrs. Eddy, declared that "there is no power apart from God" (ibid., p. 228). She ever listened for the voice of God, Truth, to direct her in her work. She foresaw the future of the Cause she had founded. This foresight enabled her to give us in "Miscellaneous Writings" (p. 383) the following beautiful prophecy of Christian Science: "In 1896 it goes without saying, preeminent over ignorance or envy, that Christian Science is founded by its discoverer, and built upon the rock of Christ. The elements of earth beat in vain against the immortal parapets of this Science. Erect and eternal, it will go on with the ages, go down the dim posterns of time unharmed, and on every battle-field rise higher in the estimation of thinkers and in the hearts of Christians."

The Church which Jesus said he would build on a rock, and which Mrs. Eddy has founded in this age with a new name, "Christian Science," cannot be overthrown. This is beautifully expressed in a well-loved hymn:

"Crowns and thrones may perish,
Kingdoms rise and wane,
But the Church of Jesus
Constant will remain;
Gates of hell can never
'Gainst that Church prevail ;
We have Christ's own promise,
And that cannot fail." 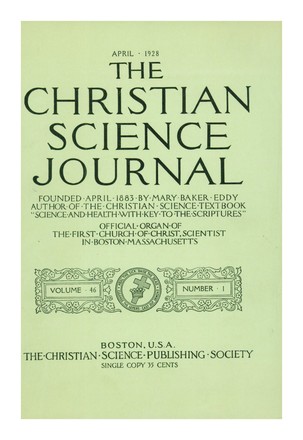 THE ANGELS OF GOD'S PRESENCE

JOY IN HIS PRESENCE

THE LOVE OF CHRIST

"BE STILL, AND KNOW"

THE SUPREME COURT IN OUR CHURCH GOVERNMENT

THERE IS NO DEATH

THE EVER PRESENT NOW

By The Christian Science Board of Directors | April 1928

NOTES FROM THE PUBLISHING HOUSE

Christian Science has been my...

In loving gratitude for many benefits...