"We all must learn that Life is God" (Science and Health by Mrs. Eddy, p. 496). When I was involved in a severe automobile accident on the highway and I was almost unconscious, I could hear my own voice affirming over and over: "Life is God. God is the only Life." When I felt I could not draw another breath because of the intense pain and pressure, the Word of Life sustained me. I could not open my eyes, and therefore it was impossible to see the evidence of the accident or the person at the wheel of the car that had run into me.

At no time did I feel resentment toward the other driver. When I was told later that he had been intoxicated, I continued to acknowledge only the perfect man, the expression of God, Spirit, and rejected the belief that man is a mortal to be condemned and despised.

For several days I was on the hospital's critical list. X-ray pictures were taken, and the doctor said that in addition to cuts from broken glass I had suffered serious damage to my chest, a punctured and collapsed lung, and thirteen fractured ribs. A chest specialist was called in, and he said that unless I was operated on immediately I would suffocate. Some material aids were applied, but when they were unsuccessful, they were withdrawn. The practitioner strengthened me by saying that since I had relied so steadfastly on Christian Science for healing all my life, now was the time to stand firmly on the power of God alone.

Although I was not completely aware of what was happening around me, I did inform both doctors that there would be no operation, no stitches, and no reliance on material remedies of any kind. I requested to be moved to the Christian Science Benevolent Association, Chestnut Hill, Massachusetts, at the earliest possible moment, but since this was several thousand miles away, it was not feasible to move me. God's ever-presence had to be realized right where I was. I shall never cease to be deeply and humbly grateful to the beloved practitioner, who was on call day and night, and who inspired, strengthened, and encouraged me with gentle firmness.

And I shall never forget the untiring devotion of the friend at my side, particularly during the night we prayed constantly. The practitioner asked my friend not to let me sleep but to keep me mentally active. So my friend kept the light on, and we obediently declared truths from the Bible and from Mrs. Eddy's writings. My friend read to me, pausing frequently for me to repeat what she had read. The next day the doctor instructed the nurse to help me get out of bed and sit in a chair, and the following day he asked, "When would you like to go to Boston?" My joy was unbounded. He added, "Everything is A-OK; all systems go." And he acknowledged that it was a remarkable recovery and a very beautiful demonstration of mental surgery.

A few days later I took the plane flight of several thousand miles alone to the Benevolent Association. When I arrived there, breathing was still somewhat labored, and my voice was unnatural and strained. The practitioner helped me to acknowledge with certainty man's absolute freedom and joy, to breathe joyously, to speak with the voice of Truth and Love, and to know that strength, being God-reflected, was never lost. In a few days my voice was natural and clear.

I was nursed at the Benevolent Association for several weeks and left completely healed to take up my professional work. I am tremendously grateful for the tender care that was given me there and the daily recognition by all who attended to my needs that no accident had ever happened in the reality of perfection and that there could be no memories of an accident, but only of the ever-presence of ministering Love. "He that touches the hem of Christ's robe and masters his mortal beliefs, animality, and hate, rejoices in the proof of healing,—in a sweet and certain sense that God is Love" (Science and Health, p. 569). Through the completeness of this healing I knew that I had seen the miracle of Christ and had touched the hem of Christ's robe.

I am grateful for everyone everywhere who is working for the Cause of Christian Science. For the opportunities I have had as a lifelong Christian Scientist to work for it, for class instruction and the unfailing inspiration of association meetings, for Christ Jesus, and for Mrs. Eddy, I am grateful to God. 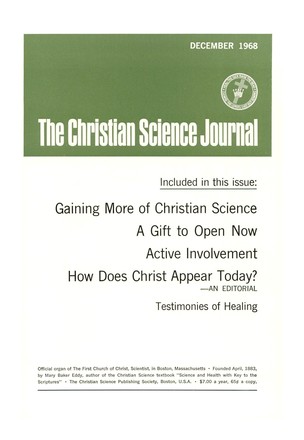 A Gift to Open Now

"As the mountains are round about Jerusalem"

Are We Kicking Against the Pricks?

"Behold the Lamb of God"

Ascending and Descending: A Message to Sunday School Teachers

"E": An Elohistic Source of the Pentateuch

What Christian Science Is