A number of years ago, I noticed that a small growth I’d had on my body for several years was getting larger at an alarming rate and becoming ugly and painful. I had previously accepted the growth as harmless, but now it could no longer be ignored.

As a Christian Scientist, I knew I needed to pray and ask for God’s guidance and help. I also called a Christian Science practitioner to pray for me and help me recognize that as a spiritual being, I was invulnerable and could not be touched by the lie of life in matter.

The amazing thing was not so much what the practitioner said to me, but the inspired truths that poured into my consciousness during the several days he was praying for me. I had to get a notebook to write them all down.

Now, the physical senses were telling me the growth was real and threatening. But one of the inspired thoughts that was coming to me at that time was this: “Nothing has roots that is not grounded in Love.” In Christian Science, Love is another name for God. It was so clear to me in contemplating this idea that the physical problem could not have come from a loving God, because it was not good.

Christian Science reveals that God, who is infinite, is the only creator, and all that He makes is spiritual and perfect. So I reasoned that the growth was in no way attached to my real, spiritual identity. Not being Godlike, it had no roots in God. In other words, it had no legitimate source, no real origin.

I saw, too, that matter could not make any conditions for me as God’s spiritual expression. When I was tempted to think of myself as material, suggestions like “It’s getting worse!” or “It’s getting better!” crowded my thought. I questioned, “What is this ‘it’?” I finally concluded that the growth could be nothing more than an illusion, a false suggestion. If the growth was real, substantial, and a part of me, then focusing on my body and what it was doing would make sense. But if man is spiritual and made in God’s likeness, as the Bible declares, then nothing ungodlike can be a part of man.

Within a few days of this flood of inspiration that began when the practitioner started praying for me, the growth began to dry up and was soon gone. I didn’t have to follow some medical process or timetable of remission. Once I saw its unreality, the growth disappeared, and since then there has been no trace of evidence that it was ever a part of me.

In Science and Health with Key to the Scriptures, Mary Baker Eddy says: “To reduce inflammation, dissolve a tumor, or cure organic disease, I have found divine Truth more potent than all lower remedies. And why not, since Mind, God, is the source and condition of all existence?” (pp. 180–181).

I am deeply grateful for what Christian Science has taught me of my true source and condition, and the health and harmony I have experienced as a result. 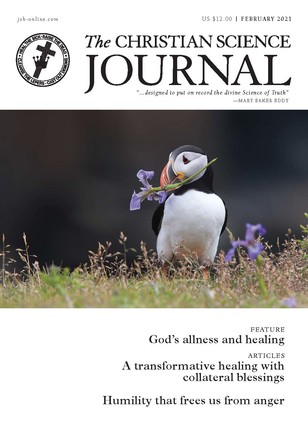 Do numbers have power over you?

A transformative healing with collateral blessings

Humility that frees us from anger

Hanging by a thread?

Does God guide us in matters of the heart?

A healing of vision

Three healings proved I was “unfallen”