WITH Christ Jesus buried in the tomb, the aim of materiality seemingly had been accomplished, and to those who, mocking and rejecting the spiritual idea, had crucified its human representative, the spiritual teachings of the great Master undoubtedly appeared a failure. Few in those days saw beyond the evidence of the senses and understood what really took place in the tomb. Nevertheless, the voice of Truth has ever since proclaimed this victorious achievement, "He is risen! He is risen!" until to-day it is a general conviction that from the realization of the truth within the tomb there transpired one of the greatest events that has ever taken place.

Beyond all human aid, bound hand and foot in graveclothes, yet Christ Jesus was not helpless. Despite a lacerated body his divine individuality was consciously at work. The Master was depending upon the might of Mind to produce its own phenomenon. He was bringing to bear upon that evidence of supposed lifelessness in the tomb the divine forces of righteousness, the Life-power and Love-power of the universe. There, where to material sense nothing appeared to be active, the crucified Saviour was alive, mentally demonstrating the unbroken harmony of man's indestructible individuality. In writing of Jesus' experience in the tomb, Mrs. Eddy states in "Science and Health with Key to the Scriptures" (p. 44), "He met and mastered on the basis of Christian Science, the power of Mind over matter, all the claims of medicine, surgery, and hygiene." So completely did Christ Jesus link his consciousness to the divine Life that even the human sense of his body was preserved, despite what appeared to be death.

Was there, then, a lifeless man entombed within the walls of the sepulcher? No! The spiritual intelligence Jesus individualized could never die. Through the Master's sublime victory his enemies' temporary success was turned into defeat. While the world had looked upon the tomb as an end of his life, Christ Jesus made of it a quiet retreat, where, apart from world-thought, he could break the belief of mortal limitation. Despite the gloom of the sepulcher, the brightness of the Christ-mind illumined his consciousness with the glory of eternal life.

Not by human means, but by the power of Mind alone, was the great stone rolled away from the sepulcher. Not by any human means did Christ Jesus step forth in his supreme victory, resurrected from the confines of the false human concept. Clearly, he must have recognized that Life and Love, filling all space, were within what appeared as the tomb. Therefore, he could prove that in reality there was neither material tomb nor stone before it; that these were only human misconceptions. What really took place in the tomb, then, was a demonstration of Mind's presence and power, whereby the mortal conviction of death was rolled away and the presence of Life proved supreme.

Figuratively speaking, all the world is entombed within the belief of a finite existence, within the limits of the human mind, walled in by the conviction of reality in matter, and bound with superstitions and traditions. Has not each one of us at times felt as if entombed within walls of limitation and shut in by the routine of daily demands? Have we not all been buried in self, mentally bound with fears and uncontrollable dispositions, feeling, perhaps, as if a great stone lay in front of us, and wondering whether there would ever be any possible way to escape from our problems? He who binds himself within human opinions, notions, and personal prejudices cannot function outside of these narrow limits. Truly, the mental tomb of mankind is belief in materiality. In "Miscellaneous Writings" (p. 179) we read: "What is it that seems a stone between us and the resurrection morning? It is the belief of mind in matter. We can only come into the spiritual resurrection by quitting the old consciousness of Soul in sense."

Has humanity ever been able to come forth from its mental tomb of erring belief through human endeavor alone? Had the Master attempted through human effort to roll away the stone from the door of the tomb, think you there would have been a resurrection morn? Yet, how difficult it is for human nature to surrender its own feeble efforts! It rushes forth to achieve with impulses all its own; and if for any reason its opportunities and faculties seem to be restricted, it believes all is hopeless.

But real Mind-faculties cannot be confined to human limits. Love cannot be sealed in by hatred. The activity of good can never cease. The fact that two times two is four is active everywhere. Just so is the spiritual idea of Life and Love unrestricted by the limits of human concepts. Hence, in times of mental gloom our work is not to beat vainly against fortuitous circumstances which seemingly restrict us, nor to wonder how we got into such situations and who is to blame; rather is it to reflect the light of divine Love which penetrates the rock of false material beliefs, causing them to crumble.

To depend upon the power of Mind alone in the would-be tomb of material sense is to reach the zenith of demonstration. When at the spiritual altitude of true goodness, we are at the point of marvelous achievement. In the stillness of prayer and aloneness of thought, new virtues unfold and the resources of righteousness are revealed. With the light of spiritual vision penetrating our thought, we peer beyond the confines of human belief into the range of man's infinite capacities. Then do hope and courage surge into our consciousness; spiritual faculties become clearer to us; we gather fresh energy, and discover the motive-power of Love with which to break through the barriers of material world-resistance. Animated with the qualities of Christliness, we are lifted into the conscious power of man's spiritual individuality. Reflecting this power, we step forth with such spiritualization of thought that gradually every obstruction to our progress is removed. The graveclothes of fear and despair, cold reason and intellectualism, are left behind, and we ascend into the freshness of inspiration and the joy of liberation.

Rolling away from our thoughts false beliefs and material concepts, unshackling supposedly binding dispositions, unwinding ignorance and grief, and mentally breaking through limited modes of thought into the range of fetterless Mind—these are achievements wrought in consciousness which, though hidden from the world, enable us to arise out of the deadness of mortal thought into the unlimited realm of Mind-action and Mind-power. Thereby our demonstrations come forth through the reflected righteousness of the spiritual idea. Apart from the confines of material concepts, spiritual achievements transpire naturally and simply according to divine law.

Before the vision of measureless Mind, how can we accept the confining evidence of the senses, testifying to sin, disease, and death? Looking to "the things which are seen," we are on the side of those who believed Jesus to be dead in the tomb. The so-called human mind, unless it can see good results, believes that nothing good is happening. Yet, things must unfold in consciousness before they can take place outwardly, since all phenomena are but the expression of thought. How still and sacred must have been those periods of unfoldment for our Master during his three days' confinement in the tomb; and what a Herculean task was being performed! As we succeed in holding our thought to the spiritual evidence not seen, the walls of our limitations vanish; we find them to have been erroneously mental, and we no longer wait for a change of material sense before acknowledging the supremacy of Mind.

Although he doubtless went about in perfect ease and comfort, the risen Saviour still carried the spear wound and nail prints after his resurrection. Watching to see the illumination taking place in consciousness as a result of Truth, we maintain our confidence and assurance, and rejoice in the certain workings of Life and Love, irrespective of any outward sign. Then, when the arguments of sense attack us, we can know that the true sense of Life is not in matter, and can answer, I am not there; I have risen. With Mary we can exclaim, "Rabboni; . . . Master," in sweet recognition of the risen Saviour.

In the long struggle and the waiting in confining circumstances, or so-called physical disabilities, when day after day nothing seems to happen, when every door is closed and there appears no way out, the Christian Scientist, understanding that man reflects the perpetual activity of Mind, looks beyond the evidence of the senses and discerns the marvelous unfoldment taking place in consciousness through the reflection of divine Love. In the mighty wrestlings of overcoming error we discover that, although human energies and interests may seem to fail, we become animated with the graces of Spirit. Endurance, patience, and stability are all won in the overcoming of adverse experiences. Through the silent workings of Spirit, self-will and rebellion surrender to divine law. We step forth from our wrestling chastened and sanctified, with a new outlook, and a new power. Think it not, then, an occasion for despair if we are seemingly buried in some hopeless situation. Be the condition what it may, let us make of the experience a quiet retreat of spiritual aloofness and security.

To-day, through Christian Science, we are learning that the Christ is in our midst, resurrecting and liberating human thought from wrong thinking, calling forth mankind from the sepulcher of sin, disease, and death, out of the tomb of materiality into the boundless freedom of spiritual being. Verily, no matter how dark the gloom of material sense, we are never helpless, for there is always a way out; always the opportunity for spiritual resurrection lies before us. The reviving and invigorating forces of Spirit, the warm tenderness and radiant glow of Soul, "burst the rending tomb."

Mrs. Eddy, who so inspiredly beheld the living Christ in this age, has announced its presence and power in these words ( The First Church of Christ, Scientist, and Miscellany, p. 191): "This glad Easter morning witnesseth a risen Saviour, a higher human sense of Life and Love, which wipes away all tears. With graveclothes laid aside, Christ, Truth, has come forth from the tomb of the past, clad in immortality. The sepulchres give up their dead. Spirit is saying unto matter: I am not there, am not within you. Behold the place where they laid me; but human thought has risen! Mortality's thick gloom is pierced. The stone is rolled away."

This article is included in:
1938 - PAMPHLET 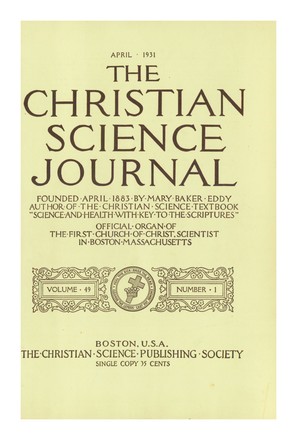 WOULD YE BE GOD'S CHILDREN?

THE GLORY OF THE TOMB

AT GATES OF NAIN

"A YOUTH THAT NEVER GROWS OLD"

THE COMFORT OF JOB

THE INVITATION OF THE CHRIST