Political manipulation, scandal, graft, corruption—the guises of evil are manifold in today's governmental systems. Narrow partisanship, deceit, and selfish interest seem rampant. What can be done to help free our world from "the claims of politics and of human power" against which Mrs. Eddy warned us? Her full statement, under the heading "Insufficient Freedom," reads: "To my sense, the most imminent dangers confronting the coming century are: the robbing of people of life and liberty under the warrant of the Scriptures; the claims of politics and of human power, industrial slavery, and insufficient freedom of honest competition; and ritual, creed, and trusts in place of the Golden Rule, 'Whatsoever ye would that men should do to you, do ye even so to them.'" The First Church of Christ, Scientist, and Miscellany, p. 266;

How do we as individual Christians regard politics and politicians? How do we choose them, vote for them, support them? How do we put the very best people into public office? How do we behave in our private lives to uphold the standards we demand of our elected representatives?

The great need, we often hear, is for statesmen in public life rather than mere politicians. But what is the difference? Webster indicates that "politician" in its lower sense involves interests narrower and often more selfish than those of a statesman. The latter is capable of broadminded, farseeing wisdom in affairs of state. It has been said that the difference between a politician and a statesman is that the politician thinks of himself and his party; the statesman thinks of the people and the country.

Throughout the Bible we see that those men who have done the most for their nations in leading them, providing for them, and protecting them from danger have been statesmen. Great men, such as Abraham, Joseph, Moses, and Nehemiah, were statesmen of the first order. Selfish interests, self-will, and feathering their own nests were foreign to their thoughts and actions. In contrast, many political leaders and kings of the Bible, such as Jeroboam, Zimri, Ahab, and Pekah (to mention only a few), have left no significant mark on history and did little to elevate their nations.

Perhaps one of the greatest examples of statesmanship is seen in the life of Joseph. Here was a man sold as a slave into an alien country who rose to be its chief minister. Moral integrity, vision, and compassionate concern for others were the outstanding qualities that elevated him to the second highest position in the land. His moral integrity in the midst of severe and continuous provocation refused to allow him to lower his standards, even though doing so might have brought him immediate advancement. He was a visionary with large thoughts, an expansive horizon, bold imagination, and yet he was an able administrator and businessman. He was not a self-seeker, but a servant. Even in prison his genuine concern for others prompted him to ask of his fellow prisoners, Pharaoh's officers, "Wherefore look ye so sadly to day?" Gen. 40:7;

In short, Joseph allowed himself to be used by God, and thus he became great. Malice, resentment, revenge, however well justified, were not allowed to motivate or impel his actions. Joseph's shining example of statesmanship is one we could do well to ponder and emulate.

Those who hold office in our governments need our prayers—prayers that innate statesmanlike qualities may be developed and established in our leadership. Prayer for our government—as all prayer —starts with the allness of God, the oneness of man with God as His spiritual expression, and the nothingness of evil. Working from this viewpoint, we can see that the only qualities that can be or are active anywhere, absolutely speaking, are those manifesting through Christ, Truth, the omnipotence of God. True government— God's government—is the evidence of Principle in action, establishing spiritual laws, impersonal justice, immovable stability, and effective authority. God's government is the evidence of Mind in action, unfolding intelligent ideas, originality, unerring wisdom, infinite thought and vision.

Claiming this true concept of government for ourselves, our country, and our world is effective prayer and will help support, purify, and elevate those holding office. We can expect to see evidence that they are responding increasingly to the good and the true and that the devious methods of manipulative, self-seeking evil are failing for lack of an audience.

Although we can never afford to be blind to things that are wrong in government or to dishonesty or wrongdoing in officials, our right thinking about those in public office can help to strengthen their expression of God-derived integrity. The spiritual view of man as the image and likeness of God, expressing upright, Soul-impelled, constructive activity, is the true view, which will bring God's control more and more into evidence in our individual and governmental circles.

Have you ever noticed that when we point a finger at someone else we have three fingers pointing at ourselves? Let us make sure that we, too, exhibit the statesmanlike qualities we wish to see in government office. Do we think narrowly of ourselves, our selfish interests, our immediate families, our own business interests, or are we thinking more expansively with caring concern for others, for those of different background, for those who may be in competition with us? Do we have the same kind of caring concern for the starving child with a different skin color from our own on the other side of the world as we would feel for children closer to home or in our own family?

Do we think unselfishly of the interests of the whole—even though they may appear to conflict with our individual needs? Do we ever compromise with our conscience, rationalize that the end justifies the means? Do we exceed speed limits, bribe our children, tell white lies to our employers or employees?

Are we meticulously honest with our expense accounts, housekeeping affairs, tax returns? Are we truly what we appear to be, or do we put on an outward show to impress others? Do we talk vocally of grand-sounding ideals and yet hide prejudice, hatred, and apathy in our innermost hearts? Do we sometimes practice artful contriving and manipulation of others in the guise of good, even though with heart-searching we might find self-will or self-interest at the root of our actions? Or do we persistently and patiently strive to express keen perception and God-impelled judgment in viewing our world and those within it?

It has been truly said that a country gets the government it deserves. If our country appears to have a government in need of healing, we should not shrug off the problem as "over there"—far away in the offices of government—but start by demanding true government and statesmanlike qualities in our own homes and business affairs. Let us be, ourselves, what we want to see in others, particularly those whom we elect to hold office. Mrs. Eddy writes in the Christian Science textbook, "Ask yourself: Am I living the life that approaches the supreme good?" Science and Health, p. 496; We could do well to pray and ponder before we answer this, and before we venture to ask the question of others. In this spirit, we can pray in deep humility: "Create in me a clean heart, O God; and renew a right spirit within me. . . . Then will I teach transgressors thy ways; and sinners shall be converted unto thee. . . . Then shalt thou be pleased with the sacrifices of righteousness." Ps. 51:10, 13, 19. 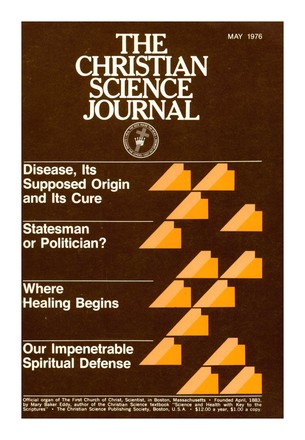 Disease, Its Supposed Origin and Its Cure

By Margaret Singleton Decker | May 1976

"It is high time to awake"

Helping Our Sunday Schools to Grow

Prophecy: Can It Be Reliable?

Science and Health: The Next Century