When our first daughter was to be born, the following words written by Mary Baker Eddy in Science and Health with Key to the Scriptures brought a new concept of birth to me: "Christian Science presents unfoldment, not accretion; it manifests no material growth from molecule to mind, but an impartation of the divine Mind to man and the universe. Proportionately as human generation ceases, the unbroken links of eternal, harmonious being will be spiritually discerned; and man, not of the earth earthly but coexistent with God, will appear."

During the birth the baby was in a breech position, and the birth was predicted to become protracted. A Christian Science practitioner was informed of this condition and prayed with me. Our daughter was born fifteen minutes later. A few minutes after this, I became aware that the baby appeared to be lifeless. Immediately one thought filled my consciousness and I said it out loud: "God is that baby's true life." The baby began to breathe.

When this same daughter was eleven years old, she ran into an icy street to dodge a snowball thrown at her and was struck by a passing car. Her arm was injured. The driver was extremely concerned for our daughter. The police officer who took the report also showed interest in the case. Our daughter refused paramedic assistance at the scene of the accident, and that night the police officer, while off duty, called at our home to see how she was doing.

My daughter and I, together with a Christian Science practitioner, had been praying for her all evening and felt that she was embraced in God's love and care. That sense of love enabled us to see everyone in its light, and this included the interested and concerned police officer and others. We knew that in truth there was nothing for us to resist and that nothing could resist divine Love. My daughter and I were conscious of the fact that God governs His idea, man, and that His government is perfect and complete. We felt His love for her and knew that God's love includes all.

At this point the child's father indicated he would feel more comfortable if she were examined, so it was decided that in the morning we would go to the local clinic. My daughter and I continued our prayer that night. The next morning, X-rays were taken and revealed multiple fractures throughout the forearm, wrist, and hand. We were informed by clinic personnel that the doctor we needed to see was away on a trip. I was given the X-rays and told to go to the county hospital to have the broken bones set. We drove directly to the county hospital. After we had waited in the emergency room for over an hour, an attendant told me to return to the clinic because the hospital did not treat clinic patients. When I returned to the clinic, an appointment with a doctor was scheduled for five days later.

During this five-day interval, a complete healing took place through continued prayer. Our daughter regained normal use of the hand and forearm. When she was subsequently examined by the clinic doctor, he said she clearly did not need to have bones set or the arm placed in a cast. But he did ask us to return for more X-rays. When the second set of X-rays was taken, I watched him examine the "before and after" pictures. He showed me each of the breaks in the previous X-ray: including forearm fractures, telescoping of bones in fingers and hand bones, and the shattered wristbone, which he said could not have been set medically and would have been replaced with a steel pin. Finally he commented: "The bones have set themselves perfectly. This is a case of a perfect mend." I told him that we were Christian Scientists and that this healing was the result of prayer through Christian Science.

I believe the love of God in our hearts for everyone associated with this experience created an atmosphere in which quick and harmonious healing was the natural outcome. I am so grateful for the spiritual inspiration that sustained us moment by moment.

Several years later, we moved to another state. This same daughter, then a teenager, entered high school in an environment that seemed to base acceptability on drug use. Her resistance to the temptations she faced was counterbalanced by her desire to be accepted in her new environment. Eventually she began to experiment with drugs. As a single parent at that time, I tried to maintain a high standard of moral values in our home. So much of my day, however, had to be spent away from home to support the household that the situation soon became impossible. Every time I said "no" to behavior not in accord with the standards of our home, it would result in this daughter's running away from home. At first, only for a night or two, then for one or two weeks, and finally for months. The period of time from age fourteen through seventeen was filled with this struggle. She had a violent temper and rejected everything her family stood for.

When her drug use shifted to cocaine, I felt the last thread of our family relationship pulled from us. The few times I could even manage to contact her, she was almost unrecognizable to me. Shortly after this we lost all contact with her. I tried several times, unsuccessfully, to search for her.

For the next three years, I prayed for her constantly. At times I felt overcome with hopelessness at losing a child. At other times I tried to analyze where I had gone wrong. Quickly, after each such struggle, the truth that God is man's Life would come to my thought to lift it up. No matter how strong the temptation was to believe that the situation was hopeless, I could not get away from that foundational truth about my daughter. It led me to realize that she is always with her real Parent and that I am not and never truly was her creator. Remembering her healing at birth always lifted my thought again, enabling me to pray effectively. The calm assurance that all is well with God's creation in His kingdom—and that His kingdom is come—dawned upon me.

Toward the end of this experience I gained spiritual strength to see the powerlessness of material substances called drugs. Belief in their ability to affect the idea of infinite Mind left me. Fear of the effect of these mindless drugs upon man, God's pure idea, lessened. I felt a distinct sense of healing.

Several months later, this daughter called me from another part of the state to tell me that she was free from the drugs and had turned her life around. There are no words to express the joy that fills my heart and the unending gratitude to God I feel for this healing. Our daughter and her family have since relocated to our area, and she and I now work together harmoniously in my business. Our family has been made whole because of Christian Science.

For these and many other healings, I thank God, the one Parent, and I'm profoundly grateful that Christ Jesus fulfilled his Father's mission for him: "For God sent not his Son into the world to condemn the world; but that the world through him might be saved." I owe a lifetime of gratitude to Mary Baker Eddy, whose life was devoted to establishing Christian Science so that all mankind may understand God and our true relationship to Him as His offspring and demonstrate that relationship daily.

I am the daughter spoken of in my mother's testimony, and I wish to verify that the healings occurred as she presents them. I am also very grateful for Christian Science and for the truth contained in the third tenet: "We acknowledge God's forgiveness of sin in the destruction of sin and the spiritual understanding that casts out evil as unreal. But the belief in sin is punished so long as the belief lasts" (Science and Health). I am truly happy now. 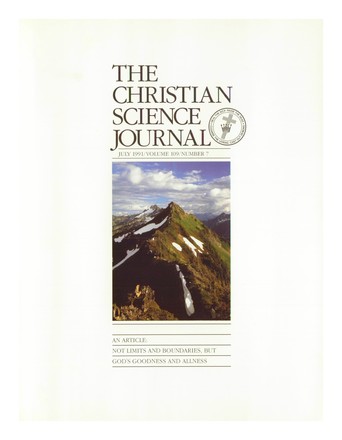 Not limits and boundaries, but God's goodness and allness

"Affliction shall not rise up the second time"

Getting to the "core" of the case

How can we know God, Truth?

Expressing what Christian Science means to us

STARTING OUT IN THE PRACTICE OF CHRISTIAN SCIENCE HEALING

There is an answer...

Healing through willingness to serve church

MORE "SIGNS OF THE TIMES"

Meetings for youth of all faiths

I was raised in a Christian Scientist family, but...

I was talking with a friend recently about the...