In the illustrated poem, "Christ and Christmas" by Mary Baker Eddy, is a picture of two angels without wings, moving gracefully and swiftly through space. May they not illustrate something of the activity of the spiritual idea, something of the heavenly motive power of divine grace, quickening and arousing thought with the impetus of inspiration and divine intelligence? Such thought activity is described figuratively by Ezekiel in his vision of the cherubim, where we read (Ezek. 1:12, 14): "And they went every one straight forward: whither the spirit was to go, they went; and they turned not when they went.... And the living creatures ran and returned as the appearance of a flash of lightning."

In a moment of spiritual vision, eternal truths are revealed that otherwise might take years for the human mind to comprehend. No wonder then that when, through spiritual sense, one begins to understand the two books—the Bible and "Science and Health with Key to the Scriptures" by Mrs. Eddy—flashes of divine light are seen and instantaneous healing is experienced.

It is said that an electric impulse encircles the globe in less than a second, but spiritual thought is even swifter, for it is independent of time and its results are instant. "In a moment, in the twinkling of an eye," as Paul said (I Cor. 15:52), a scene of despair can, through the action of spiritual understanding and reflection, be changed to a scene of achievement. With the speed of goodness and with the swiftness of divine ideas one's experience can be changed from a crippled, disabled, material sense of action to one of bounding freedom and potent activity.

"Mind's infinite ideas run and disport themselves. In humility they climb the heights of holiness," we read in the Christian Science textbook (p. 514). When thought is moved by Spirit, when one's heart is bounding with spiritual freedom and bliss, how can there be inaction or impotency? The expression is sometimes heard among those who turn to Christian Science for physical healing, "I feel as if I were walking on air."

Very different are the thought processes and impulses of the human mind. Grief and despair drag heavily. Slow and clumsy are the movements of selfishness and greed. Groping and stumbling blindly, self-righteousness blocks its own way. If thought is resentful, proud, or egotistical, it is bound in restrictive grooves of personal sense. Purposeful activities are crippled by envy and jealousy. The mad rush of ambition and anger is disastrous. The action of self-will and aggression is apt to be explosive and destructive. Merely material motion would keep us all encumbered about many things. When unprotected by spiritual means, mortals are often whirled about by rushes of mortal thought, as snowflakes are whirled about by the winds. The cumbersome forces of material activity, as well as the apathy of inactivity, must yield to the omniaction of divine goodness and be proved unreal.

In "The People's Idea of God" (p. 10) Mrs. Eddy writes, "Thought is the essence of an act, and the stronger element of action; even as steam is more powerful than water, simply because it is more ethereal." Hence, harmonious functioning in the physical realm results not from matter but from mental action. Mind is not in the body. The body, therefore, does not move thought about, but thought moves the body about. So action is not produced by anything inside a physical body, nor is it contingent upon any of its conditions.

Is it strange then that with a change of thought from the material to the spiritual there should be a sudden change of physical conditions; that when Love casts out cramping fears and releases mentality from crippling doubts and limping theories, there should result an instant healing? In a consciousness where forgiveness, humility, and purity are radiantly active, there is no sickly thinking to be externalized in diseased action. To the one who is yielding up belief in material action and leaning prayerfully upon divine Principle, there can be no stumbling, falling, or injury; no quivering or shaking; no hobbling of old age; for one's understanding of incorporeality demonstrates supremacy over belief in impaired activity or disaster.

Well may we earnestly seek to understand how supremacy is gained over the mechanism of material thought processes and how the healing action of Spirit can be demonstrated. Sometimes it may be in a moment of emergency, or in some chastening experience of Gethsemane, that the illuminations of Spirit rouse thought to sudden and dynamic action. But most frequently it is in silent prayer that the action of divine Mind is experienced. As leaves are stirred by gentle breezes, so receptive thought is softly stirred in the sacred precincts of prayer. In silent prayer thought is liberated from time, distance, and material locomotion and is free to soar in the realm of incorporeal being. With thought thus quickened, the mental mechanism of undisciplined thinking is silenced. Soul commands the senses, and matter cannot resist the harmonious, healing action of the Christ.

When Christian Science came to the writer, it found her an invalid in a rest home, suffering from a double curvature of the spine. The physicians offered her no hope of a life other than that of an invalid. As the months of inactivity gloomily went by, she began to feel it would be preferable to leave the scene of earthly experience. She asked many questions concerning heaven and Soul, yet no one gave her satisfactory answers. One day, however, a friend told her of Christian Science and its teaching that heaven is not in the sky, nor is it a locality, but a divine state of consciousness. This answer made her want to know more of such comfort-bringing teaching.

A Christian Science practitioner was called. After a treatment was given, the practitioner told her to feel perfectly free to rise and walk, pointing out that this freedom was in accordance with the law of God. She related the Scriptural account of the healing of the palsied man who was carried in a bed, let down through the roof of a house, and laid at the feet of Christ Jesus, and of the man's immediate response to the liberating command of the Master, as given in Mark's Gospel (2:11), "Arise, and take up thy bed, and go thy way into thine house."

In thoughtfully dwelling upon this experience, the writer saw that the command to arise and walk applied to her as well, and immediately she felt lifted up as by the tender, healing touch of the Christ, and became buoyant, confident, and grateful. Why, indeed, she exclaimed to herself, should her whole life be subject to a piece of twisted matter? Why should she be useless and inactive? Then she began gradually to try to get up and found there was no pain. She dressed, took the streetcar, and went down to see her mother in a hotel. The elevators were not running. She glanced at the stairs, and fervently repeating the Lord's Prayer she climbed five flights without difficulty, and burst into her mother's apartment exclaiming, "I am healed!" Later, the mother insisted upon a medical examination, and when it was made by the same physician who had formerly attended her, he exclaimed in great astonishment, "Why, your back is perfectly straight!" Later, he purchased the Christian Science textbook in the hope of ascertaining how the healing had been accomplished.

Controlled by Mind-action, the body expresses grace, litheness, and agility. David must have glimpsed something of this truth when he declared (II Sam. 22:34), "He maketh my feet like hinds' feet." Spiritual vision gives fresh energy to action; gratitude leaps and runs with gladness, song, and praise; and love, unconfined in its reflection, treads the earth with buoyant step. Assuredly, today as yesterday, the divine potency of Christly thought enables the sad and weary to run and leap with joy, the languishing to come forth from inactivity to usefulness, and the lame and disabled to arise and walk.

This article is included in:
1946 - PAMPHLET 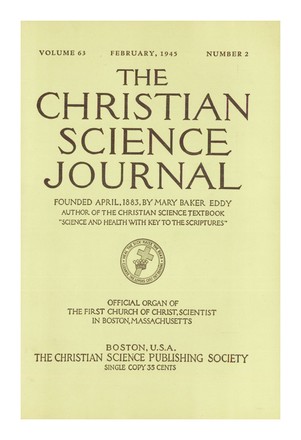 "THE UNIVERSAL SOLVENT OF LOVE"

"THOU ART MY BELOVED SON"

WHAT SHALL I DO?

"WHAT SAY YOU OF WOMAN?"

FOR THIS I PRAY

"YE MUST BE BORN AGAIN"

THE JOY OF GOD'S PRESENCE

THE WAY THROUGH THE VALLEY

DOMINION THROUGH THE MINISTRY OF THE WORD

IS MAN CAPABLE OF BEING ISOLATED?

THE TRUTH ABOUT EDUCATION

"THE MOST SACRED AND SALUTARY POWER"