During World War II many families around the world were asked to plant victory gardens to supplement limited food rations. But a secondary reason for the gardens was to boost morale; they helped citizens know they were contributing to the war effort and feel gratified by the bounty of food that would result. In 1943 around 18 million families grew victory gardens in the United States alone, including one planted on the White House lawn by the First Lady of the United States, Eleanor Roosevelt.

In March and April of 2020, as families around the world were shut in their homes facing a different sort of battle with a pandemic, victory gardens, as symbols of hope and life, started popping up again. Even while under restrictions that generally kept people inside, these gardens allowed us to embrace a new and invigorating activity whose rewards we would reap months later. My husband and I joined the movement and repurposed an old, tired garden, filling it with colorful perennials. We count our victory garden as one of the unforeseen blessings of an otherwise challenging year.

Gardens have always been one of my favorite places to be. They are spaces celebrating renewal and vibrant life, away from the noise of screen time and daily obligations. While they need to be tended, requiring us to get our hands and knees right in the dirt to weed out that which doesn’t belong, each spring they surprise and delight us with their blooms.

Maybe it was all this gardening that caused me to notice last April that gardens are the backdrop of the Easter story, the story of the crucifixion and resurrection of Christ Jesus. His great spiritual triumph starts, in fact, in a garden.

Having finished eating what would later be known as “the last supper” with his disciples, Jesus speaks at length, preparing them for what has been prophesied, and which he well knows is to come. As the heaviness of that difficult night falls, he retreats with his disciples “over the brook Cedron, where was a garden, into the which he entered” (John 18:1). This garden is referred to as Gethsemane in the Gospels of Matthew and Mark. Jesus, lonely and in anguish, goes there to pray for the grace and courage to accept the cup that he knows he must drink—the supreme hardship he must face and go through.

It was the fear that life was fragile and at the mercy of matter that was really nagging at me.

While his students fall asleep, the quiet of the garden allows Jesus to grapple with the weight of doubt and despair, until his thoughts rise to the confidence and trust that, despite the grim outlook, God has a plan for humanity. In Science and Health with Key to the Scriptures, Mary Baker Eddy speaks of the tremendous spiritual growth that took place in the garden: “During his night of gloom and glory in the garden, Jesus realized the utter error of a belief in any possible material intelligence. . . . Jesus turned forever away from earth to heaven, from sense to Soul” (pp. 47–48).

Jesus’ willingness to leave behind the last shred of human will in the garden brought forth his declaration to God, “Thy will be done” (Matthew 26:42). This was foreshadowing his eventual resurrection and ascension beyond a mortal sense of life—the limitations and disappointments of materialism—to the understanding and full acceptance of immortal life.

Led back to the city by soldiers, a grand struggle of passion and pride ensues among his accusers, but Jesus has already left all this behind. He says nothing when the chief priests level accusations against him before Pontius Pilate, the Roman governor, and he doesn’t try to stop the humiliating and painful crucifixion.

Soon the body of Jesus is left with Joseph of Arimathaea and Nicodemus, who lovingly wrap him in clean linen, after which he is brought again to a garden: “Now in the place where he was crucified there was a garden; and in the garden a new sepulchre, wherein was never man yet laid” (John 19:41). There, in the sanctuary of the tomb, he has once more to push thought higher, beyond betrayal, pain, hatred, and even death, to glean the higher ideal of man, the Christ. The Christ, the divine idea, his divine identity, had never died and would present to mankind the full understanding of eternal life.

What a glorious victory took place in that garden! After three days, Jesus rose and first spoke to Mary Magdalene, who was so stunned to see him that she at first believed him to be the gardener. Soon he appeared to his other disciples, and among them the fact became known that Life is indeed eternal as he had said. His resurrection was a final demonstration of the grand lesson that “the divine must overcome the human at every point” (Science and Health, p. 43).

Christ Jesus’ resurrection went way beyond a single event or a physical act. Because Life is eternal, it was never in matter, nor could it ever be resurrected from matter. The prayerful, humble seeds sown in the garden of Gethsemane, the yielding to God and that willingness to trust that Life is spiritual and eternal, are what enabled Jesus’ forthcoming victorious resurrection and ascension.

I had a profound healing experience several years ago that was inspired by some quiet moments in a garden. A series of difficult challenges had left me ill and, for the first time, afraid for my life. While the physical symptoms seemed unrelenting, I soon realized it was the fear that life was fragile and at the mercy of matter that was really nagging at my heart and thought.

Unable to calm myself down one day, I went outside to my garden to get a change of scenery. I began to plant some perennials and, alone in that outdoor sanctuary, I felt God reassure me. This strong conviction that Life is permanent, vigorous, joyous, and spiritual filled me in a way I can barely put into words. It felt like those moments in the Bible when you read that someone was filled with the Holy Spirit, and suddenly I had a conviction that all was well.

As I continued to ponder this holy moment over the next few weeks, I came across these words in Mary Baker Eddy’s Miscellaneous Writings 1883–1896, describing Jesus’ understanding of eternal Life: “The great Way-shower illustrated Life unconfined, uncontaminated, untrammelled, by matter. He proved the superiority of Mind over the flesh, opened the door to the captive, and enabled man to demonstrate the law of Life, which St. Paul declares ‘hath made me free from the law of sin and death’ ” (p. 30).

The challenge didn’t completely end that day, but it was right there in the garden that I was completely freed of the fear of death. A few months later, all the physical symptoms had disappeared as well, and they have never returned.

It wasn’t literally being in a garden that enabled me to rise from the fear of death, but it was, in part, the quiet space the garden afforded, separated from the noise of the world belief of life in matter, so that God’s voice could be heard. It isn’t necessary to find a garden to pray in when we are seeking to lift our thoughts beyond a limiting, mortal picture. But we can find a space where the phone is put down and tasks are set aside, and turn wholeheartedly to God and ask for the Christ, the truth of being, to be revealed to us.

The implication of the Easter resurrection isn’t that Christ Jesus, the Son of God, saved us from having to go through our own challenges or trials, so that the cup or cross should pass from us. But with his example, he showed us that whatever cross we are bearing, God, who is the one divine Life, eternal and harmonious, is our Life, and there will always be a crown. There will always be a victory.

Jesus was “the most scientific man that ever trod the globe” (Science and Health, p. 313). But we are also God’s children, and so we too have the ability to demonstrate God’s power over every form of evil. “The highest earthly representative of God, speaking of human ability to reflect divine power, prophetically said to his disciples, speaking not for their day only but for all time: ‘He that believeth on me, the works that I do shall he do also;’ and ‘These signs shall follow them that believe’ ” (Science and Health, p. 52).

Each of us has these resurrection moments—moments when we leave behind the dust of limitation and mortality, and rise to the understanding of our true spiritual nature, allied with the eternal, perennially present and almighty God, who is Life itself.

We are as indefatigable as those perennial flowers in my garden. Rising above the cold winters of materialism and its many tired complaints, we continually find rebirth and the inevitable progress that the inspiration of Truth always brings.

Our Master fully and finally demonstrated divine Science in his victory over death and
the grave. Jesus’ deed was for the enlightenment of men and for the salvation of the whole world from sin, sickness, and death.

—Mary Baker Eddy
Science and Health with Key to the Scriptures, p. 45 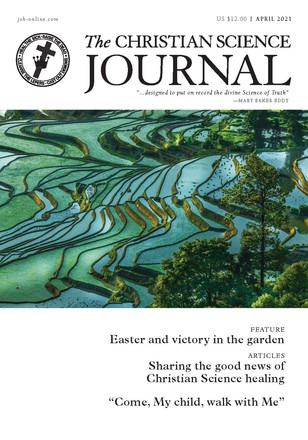 Easter and victory in the garden

The abundance of God’s goodness that’s right at hand

Stop contagion in its tracks

From intellectual study to practical help

Praying for a long time

“Come, My child, walk with Me”

I never lost the Way

What can I do when everything’s falling apart?

The importance of gratitude in prayer

From The Christian Science Board of Directors | April 2021