As we recognize the peaceful nature of real being, we aid in neutralizing the violence that sometimes explodes in the councils of nations and which would impel the assassin's trigger finger. Because God is Love, God's will is peace. Violence, on the other hand, is the culmination of mortal will unchecked. Divine Love's peaceful will is triumphant because divine Love is infinite. By revealing the presence and potency of Love's will, Christian Science shows us how to overcome violent tendencies in our own thought and life, and to help subdue them for humanity.

Love's unchallengeable will is for the perfection and immortality of man. Supposed mortal will, by contrast, assumes a physical and destructible man, hateful impulsions, finite life. In the measure that we understand the Science of being, we contain and neutralize claims of violence. "The Christianly scientific man," Mary Baker Eddy tells us in Science and Health with Key to the Scriptures, "reflects the divine law, thus becoming a law unto himself. He does violence to no man."Science and Health, p. 458;

In Science, man is the outcome of divine Love. He is subject only to divine Love. He is never the originator of violence nor its victim. Mortal mind—the suppositious source of the claim that man is separate from God and so is destructible—would argue that man is corporeal, the child of physical personalities whose attitudes and evil proclivities may be passed on to their offspring. Mortal mind would suggest that man is a mortal who is molded for good or ill by his relationship with his parents and their attitudes to him, by the atmosphere in childhood's home, by random forces and events. This is a grotesque distortion of the spiritually scientific sense of being. Man is made and directed by divine Love alone. Love's control is beneficent, intelligent, peaceful, as Christ Jesus consistently proved. These spiritually scientific facts, admitted, help neutralize the ugly impositions of mortal mind that culminate in violence—whether person to person, class to class, or nation to nation.

Some people believe that violence should be used as a tool to bring about the economic or social changes they insist must come, and now. But can that which is the opposite of divine Love and its action ever actually be the route to lasting human improvement? True progress must be the consequence of spiritually understanding reality; it can never come from wallowing in gross misconceptions of reality. "Every step of progress," Mrs. Eddy writes, "is a step more spiritual. The great element of reform is not born of human wisdom; it draws not its life from human organizations; rather is it the crumbling away of material elements from reason, the translation of law back to its original language, —Mind, and the final unity between man and God."The People's Idea of God, p. 1;

Christian Science does not foster in us the least indifference to human suffering—quite the reverse, in fact. Nevertheless it asserts that violence and suffering have no elements of ultimate reality in them. It is on this basis that we can help eliminate these from human experience. Science shows that only what issues from divine Spirit has actuality or presence. No matter how widespread or menacing its claims, violence is never real. It is an element of the dream that individuality can be mortal and discordant. Science teaches that individuality is spiritual and concordant, for it has its roots in ever-peaceful Soul.

Just as violent eruptions in the physicality we mistakenly call man have no truth in them, so eruptions of violence—no matter where on the globe they may appear—have no scientific truth in them. And they are as amenable to healing as the malfunctioning or discord of a physical body.

A presentation of violence, whatever form it assumes, is an urgent demand on us to recognize, profoundly and genuinely, that divine Love is All and has no opponent. It is an urgent demand for us to recognize that divine Spirit creates spiritual ideas and that clashing, conflicting, warring, violent mortals are the objectification of an inverted sense of the ideas of Spirit.

Instances of violence in our world are too serious to be simply dismissed with a flick of the wrist—with noble-sounding but virtually unfelt metaphysical statements. But it is equally valueless to let ourselves become so mesmerized by claims of violence that we feel impotent to help, and so drift into despair. Any lessening of violence in our own outlook and actions helps to undercut the claim for mankind. Every neutralization of mortal will by a perception of—and a yielding to—the divine will helps disarm the violence in our community and for the world.

In the case of an accident violence seems impersonal. But the same spiritually scientific truths play their part in neutralizing such suggestions. The spiritual fact is that there is no mortal mind to produce violence either through persons or through apparently impersonal operation. In reality, no instance of violence ever has had an actual cause or been a valid effect. Divine Love is the only cause, and perfect, spiritual man and the universe the only effect.

The Psalmist prayed, "Keep me, O Lord, from the hands of the wicked; preserve me from the violent man; who have purposed to overthrow my goings."Ps. 140:4. Without question, the spiritually scientific sense of man does preserve us from beliefs that man, as divine Love's expression, can inflict violence or be its victim. Divine Love is our preserver, for its infinitude forever excludes as reality lethal thoughts or actions and maintains the peace and immortality of man and the universe.

This article is included in:
1978 - PAMPHLET 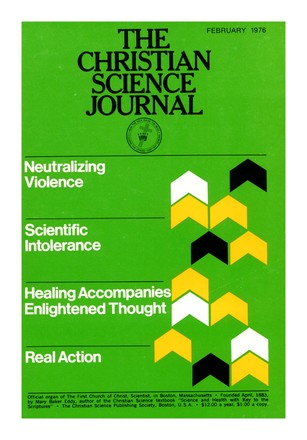 Don't Be Confused by "and"

I CANNOT BE DECEIVED

Getting Out of Debt

We Can Stop Dreaming Error's Dream!

You and the Monitor: One Reader's Viewpoint

A Scientific Approach to Learning

The Knowledge That Defeats Alienation

Man Does Not Fall

By The Christian Science Board of Directors | February 1976

"Let your light so shine before men, that...