For many years I suffered with severe stomach and digestion issues. At one point, when I was about fifteen, I chose to have surgery to relieve the symptoms, but it did not help. Later in life, at about the age of thirty, I was hospitalized as a result of many debilitating symptoms that had progressed over the years, symptoms that made it difficult to have a “normal” life or even to leave my home for extended periods of time. During my time in the hospital, after several tests, I was diagnosed with Crohn’s disease. I was told that there was no cure and that it could be managed by taking about twenty prescribed medications per day, as well as monthly visits to the hospital for injections.

My mom was raised in Christian Science, and when she married my dad, he also began to study it. My siblings and I attended Sunday School; however, I stopped going at about the age of fifteen.

Before my admission to the hospital as an adult, I had been searching for a better way. I had been reading a lot of books about spirituality and self-help, but still not studying the teachings of Christian Science that I had grown up with. After I was diagnosed and released from the hospital, I reached out to my sister, who was an active Christian Scientist, and asked for her support. The first thing she shared with me was this quote from Isaiah: “Fear thou not; for I am with thee: be not dismayed; for I am thy God: I will strengthen thee; yea, I will help thee; yea, I will uphold thee with the right hand of my righteousness” (41:10). I felt an immediate comfort from those words, yet I was doubtful that my health would be benefited by them.

My sister suggested that I talk with a Christian Science practitioner. At the time, I felt as if this was pointless, yet I made the call. The practitioner was very loving. She assured me that God was loving me at that moment and that He had always been loving and caring for me. I can’t recall exactly how long I was in touch with the practitioner, but I checked in with her a couple of times a day for several weeks. Our conversations were always very short, and she always assured me that God was taking care of me. Indeed He was, and in many ways!

I began to think deeply about each of seven synonyms for God that Mary Baker Eddy writes about in Science and Health with Key to the Scriptures (see p. 465) and looked them up in a dictionary. I had learned these synonyms (Principle, Mind, Soul, Spirit, Life, Truth, Love) in the Christian Science Sunday School, but I had not thought about them in a very long time. This was the beginning of a huge shift in consciousness. I quickly became a “sincere seeker of Truth” (Science and Health, p. x). I could not stop reading the Bible and Science and Health. I studied these two books upon waking every morning and even in the middle of the night when I would wake with thoughts of doubt and fear about the diagnosis. I was hungering and thirsting after righteousness, and I was being filled to the brim, just as Christ Jesus promised in his Sermon on the Mount (see Matthew 5–7).

The turning point in this healing is still so vivid in my memory today. I was sitting in my kitchen, studying the Bible Lesson for that week, which is found in the Christian Science Quarterly, when a whisper came to me that said, “Dance.” I remember thinking how silly that would be. Then it came again, “Dance.” In that moment, tears of gratitude rolled down my cheeks and I knew that I was healed. I felt enveloped in the light and love of God and knew that I needed to obey. So I got up and I danced! I glorified God and His love for me.

Later that day, I disposed of all the prescribed medications and continued to study and listen for direction. Over the next weeks, I quickly regained my strength, and I also gained weight rapidly. My appetite came back, and the functions of my digestive system became normal and pain-free.

I know now that what I felt in the moment that I was moved to dance was the Christ, Truth, speaking to my consciousness. Science and Health mentions this: “The inaudible voice of Truth is, to the human mind, ‘as when a lion roareth’ ” (p. 559). Though it came as a whisper in my thought, I was literally moved to listen and obey.

I will cherish this healing and continue to remember it as if it were yesterday. I still feel God’s love when I think about that moment. Whenever I read the Bible account of the lame man asking for money from Peter and John at the gate of the temple and how “he leaping up stood, and walked, and entered with them into the temple, walking, and leaping, and praising God” (see Acts 3:1–11), I am reminded of that moment of being moved to dance.

Although I am very grateful for the physical healing that took place during this prayerful time of getting to know God again, I am more grateful for the lasting changes that it made in my character and other aspects of my life. I was somehow able to pay the very large hospital bill that was incurred. Many discordant relationships were healed, as well as smoking cigarettes, marijuana use, and unfavorable character traits that are not in line with God’s creation. They simply fell away as a result of focusing my thought on God and how He created me in His image and likeness (see Genesis 1:26). I began attending my local branch Church of Christ, Scientist, and was welcomed so lovingly by all of the members. I quickly became a member and shortly thereafter took class instruction in Christian Science and joined The Mother Church.

Jesus said, “Ye shall know the truth, and the truth shall make you free” (John 8:32). The truth that Jesus speaks of is available to all. I am living proof that it absolutely sets us free! This healing took place more than fifteen years ago, and I have not experienced any symptoms since the day I heard that Christ message—Dance! 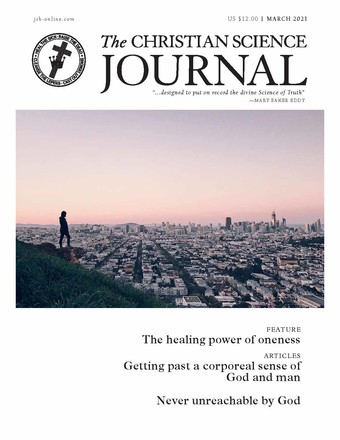