Have you ever felt stuck? Most of us have at some point. I’d like to share some ideas that helped me pray through some rough patches when I couldn’t see a way out.

The Gospels tell about Christ Jesus walking on the water. He did this after feeding the five thousand and then withdrawing to a mountain area to pray. Meanwhile, his disciples had gotten into a ship and were rowing on the Galilean Sea toward Capernaum. A storm kicked up. As the story goes, after they traveled about three to four miles, the disciples saw Jesus walking toward them on the sea and were frightened. Jesus said, “It is I; be not afraid” (John 6:20). He joined them in their boat, and the wind ceased. It was a huge relief, I’m sure, to be with him again.

You can read this account in the books of Matthew, Mark, and John in the Bible, but only John records the part after Jesus boards the disciples’ ship in these words: “Then they willingly received him into the ship: and immediately the ship was at the land whither they went” (John 6:21, emphasis added).

It’s profound to think about. John doesn’t mention unusual water or wind conditions as responsible for what took place. Time and space were not involved—Jesus joined them in the ship, and then they were immediately at land.

It reminds me of Mary Baker Eddy’s metaphysical definition of day, which includes the following: “The objects of time and sense disappear in the illumination of spiritual understanding, and Mind measures time according to the good that is unfolded” (Science and Health with Key to the Scriptures, p. 584).

I’ve come to think of this experience in the book of John as an example of Jesus “being there”—as opposed to “getting there.” He fully knew his inseparability from God and his oneness with all true being.

You may have heard the familiar, and half-serious, saying, when a place is hard to get to: “You can’t get there from here.” There’s some truth in this in the actions and example of Christ Jesus; for instance, Jesus couldn’t have fed the multitude while accepting the limitation of having only five loaves and two fishes. Similarly, we can’t escape our problems if we’re convinced that we’re firmly stuck in them.

“Being there” is a “time-free” awakening to our real spiritual identity.

Like most of us, I’ve sometimes found myself sandwiched between the proverbial rock and hard place. When this has happened, I’ve found it incredibly helpful to adopt, as much as I can, Jesus’ practice of “being there” as described above. I’ve learned that my real need is to change my mental standpoint—about where and what I am—instead of focusing on solving the problem. Instead of thinking, “I’m stuck,” I’ve found that I can see that I’m “already there,” metaphysically speaking. In other words, I’ve been able to realize that I’m a perfect spiritual idea, right now, already including God’s goodness, including a solution, including His grace. Several times I’ve been able to immediately stop feeling trapped or panicked through this approach to prayer.

For example, I remember once strongly identifying with Joseph, a Bible character thrown into a deep pit by his brothers (see Genesis 37:23–28). This was early in my career as a Christian Science practitioner, and I felt pretty stuck in my own “pit” of worry, doubt, and desperation. I didn’t see any way out, and didn’t feel I should ask others for help. God seemed far away. Reaching out in prayer with all my heart, I realized that I was only imagining myself in a pit, and could, if I chose, consider that in truth I was already out of the pit. With that prayerful recognition, I started thinking of myself as a capable practitioner who was able to help someone else who might feel trapped.

The difference? I had suddenly lost that “victim” feeling. Nothing external had changed, but my mental outlook brightened. I felt inspired. Spiritual ideas and scientific facts began flooding thought. It was darkness to light! I felt strong and confident. I started to pray about each of the problems I thought I had. But now I was able to see the problems weren’t “my” problems at all, but impersonal claims, misconceptions that I’d temporarily accepted as being mine. This was the healing! My energy, purpose, inspiration, and joy were back.

What happened? This wasn’t visualization; this was scientific prayer—realizing that whatever troubling situation we find ourselves in is not only without reality, it is without identity. It isn’t attached to a person, place, or thing. Science and Health puts it this way: “Error is false, mortal belief; it is illusion, without spiritual identity or foundation, and it has no real existence” (p. 287). The hopeless suggestions I’d been enmeshed in had lost their identity as me. They were just beliefs that weren’t true. I didn’t need to be rescued from a pit that I wasn’t in, and I could see this was actually true for everyone.

Sometimes our prayers may feel like just empty words. But it’s the spirit that really heals. Science and Health says, “Remember that the letter and mental argument are only human auxiliaries to aid in bringing thought into accord with the spirit of Truth and Love, which heals the sick and the sinner” (pp. 454–455).

For me, the main point of “being there” is a sudden, sharp, spiritual shift in thought. It’s a “time-free” awakening to our real spiritual identity; it’s realizing we’re safely in God’s care, instead of being in trouble, facing an insurmountable problem. First and foremost, it’s seeing that prayer isn’t a human technique or mental process. We’re not mortals steadily moving Spiritward, even if others think so. To me, “being there” has meant letting go of a wrong standpoint—a victim’s attitude—and instantly accepting my God-given innocence, spiritual dominion, and freedom. It’s accepting what’s true right now.

Even when it looks as though we’re in trouble, we’re always truly in the presence of God’s grace. The shift I’m describing—from “I can’t get there” to “I’m there now”—is a dawning in thought of spiritual truths that grow brighter as we embrace them. A feeling of closeness to God, or a heartfelt, wordless conviction. I’m convinced Eddy is speaking of the need for understanding this fundamental and authentic sense of reality when she writes, “Only through radical reliance on Truth can scientific healing power be realized” (Science and Health, p. 167).

John’s account of Jesus’ time-free transport to the shore, and my own healing experiences of “being there,” have thrown new light on some familiar passages. Here are some examples:

Our basic need to feel the spirit of Truth is highlighted in this statement from the chapter in Science and Health called “Recapitulation”: “… Truth is real, and error is unreal. This last statement contains the point you will most reluctantly admit, although first and last it is the most important to understand” (p. 466). Thankfully, “being there” isn’t really a choice. We can see that it’s a spiritual fact for all of us. We can’t be anywhere else; we can’t get out of the kingdom of infinite Spirit, where Spirit reigns.

If you start to feel like a victim, you can let that feeling go right now. It’s an established fact that we are spiritual expressions of God now—and time and process aren’t required for us to realize this. We’re free to move forward. We’re really divine ideas; our identities are spiritual, safe, and free. This is solid fact even if we momentarily feel uncertain about it. God never loses sight of us and our perfection, never allows evil to intrude in His creation. We can only ever be our real spiritual selves. And the reason we can prove these spiritual facts is because they are already true. As we open our thought to these facts and understand them, we’ll see more evidence of them in our lives.

So let’s remind ourselves of what God is, and what we really are:

If we find ourselves thinking, “This problem is too big,” or “I can’t get there from here,” we can know this is only a lie, a false viewpoint. It’s not true and never will be. We can firmly reject accepting or playing the role of “victim.”

If material sense whispers, “I don’t know enough,” God certainly does, and we reflect Him! I find this counsel so very reassuring: “Lest human reason becloud spiritual understanding, say not in thy heart: Sickness is possible because one’s thought and conduct do not afford a sufficient defence against it” (Mary Baker Eddy, The First Church of Christ, Scientist, and Miscellany, p. 161).

Even if we can’t walk on water yet, we can follow Jesus’ disregard for limitations, and adopt his spiritual attitude of life in God, of life inseparable from good. Our mental shift from darkness to spiritual light doesn’t need to always take time or process; it can be immediate. Separating ourselves from the problem and seeing ourselves as God’s expression, we can see we’re the victor, not the victim—and this is what salvation is about.

Like Jesus, the disciples, and the boat, we can be there. 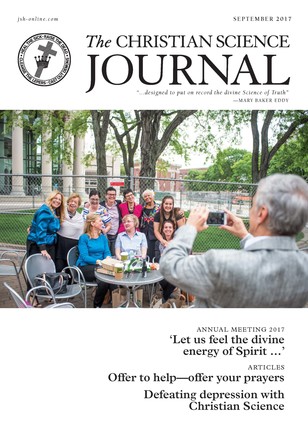 ‘Let us feel the divine energy of Spirit, bringing us into newness of life …’

When I write, why do I need to be edited?

The wilderness and God’s mothering love

Offer to help—offer your prayers

Detect and reject the impostor

A church that radiates Love

Safe in the face of terrorist threats

Blessed by The Christian Science Monitor

Fun and healing in church

from the Clerk of The Mother Church | September 2017

‘It begins with moments …’