Who would buy a great master's painting and remove the artist's signature? Regardless of how beautifully an idea is expressed on canvas, a painting that loses the artist's signature loses part of its value. The connoisseur of art in no way worships a great artist, but he holds as tremendous a respect for the genius of the painter as he does for the masterpiece that has been produced.

How apt is this analogy to the Christian Scientist! Worldly thought would try to separate him from a deep appreciation of his Leader. In fact, there are those in the world today who would, if they could, separate Mary Baker Eddy from her revelation and yet try to apply for their own spiritual advancement the truths she teaches in Science and Health with Key to the Scriptures.

When Christian Science is separated from the Discoverer and Founder of Christian Science, what is left has been devalued far more substantially than the great work of art from which the signature is removed. Such an attempt shows either ignorance or dishonesty in the thought of the one who would resort to it.

The great truths of the Science of being have existed forever. But it took a spiritual genius—more than a genius, a spiritual seer and recorder deeply dependent on God— to struggle through the maze of mortal thought and its material accompaniments of sin and disease and present to the world a true picture of man and the universe. This seer beheld depths and breadths, substance and shadow, that the unprepared eye had not understood.

But even this depth of insight was not enough to make the permanent masterpiece, to establish Christian Science on earth. Only a most spiritually disciplined thought could withstand the onslaught of mortal mind that would keep mankind enslaved in mental darkness.

In the study of human philosophies, students sometimes feel they run across ideas similar to Christian Science, and so they do. Inklings of the true Science of being have spanned the thinking of the ages. But it was not until the advent of Science and Health that the full, consistent structure of scientific spirituality was presented to the world in a written form that explains the Bible in its metaphysical import. To use this book without a just acknowledgment of its author as the revelator of Christian Science is dishonesty and will curtail or negate the user's ability to demonstrate scientific spiritual healing.

Jesus was inseparable from the Christ, Truth, he came to prove. His clear realization of his own relationship to God enabled him to refute every argument of materiality. Because he understood God, he could prove the perfection of man. This made him the Master, and no one can emulate his works who does not in some degree understand his place in this world.

Yet Jesus knew that the world was not ready for the full explanation of the Science of Life he had proved. Many human steps of freedom had to be taken before the full revelation could be comprehended. He spoke of the Comforter that would come after him and lead into all truth.See John 16:13; His promise to the ages was, "I will not leave you comfortless." And further, "These things have I spoken unto you, being yet present with you. But the Comforter, which is the Holy Ghost, whom the Father will send in my name, he shall teach you all things, and bring all things to your remembrance, whatsoever I have said unto you." 14:18, 25, 26; In Revelation, reference is made to the two witnesses earlier mentioned by Zechariah (4:3): "And I will give power unto my two witnesses, and they shall prophesy a thousand two hundred and threescore days, clothed in sackcloth. These are the two olive trees, and the two candlesticks standing before the God of the earth."Rev. 11:3, 4; This confirms what Jesus taught — the further appearance of Truth that would remain forever.

Surely from her own pen comes the proof that Mrs. Eddy expected no deification of herself. But she does have a special relationship to the Divine Science she so completely explained, and which she established in this world. Those who would prove Christian Science can never separate her from her work. This recognition is indispensable to the spiritual progress of individuals and churches.

What results can be expected by students of Christian Science who clarify their concept of their Leader's place? One branch Church of Christ, Scientist, found great benefit from this clarification of thought on the part of some of its members who were working on the correction of poor attendance in Sunday School. Because of steadily declining numbers, the staff decided to hold weekly inspirational meetings and to study themes in relation to Sunday School progress. Each staff member chose a subject for a month's work. In the fifth month one member asked that the workers concentrate on the subject of Mrs. Eddy. There were five Sundays that month, and the five topics were: Mrs. Eddy as Discoverer, as Founder, as Leader, her place in prophecy, and the place of her Manual of The Mother Church.

From the outset of the metaphysical study the Sunday School began to grow. But the month the staff turned their attention to Mrs. Eddy and emphasized her unique role as Leader, there were five new classes formed from the overflow of students. Fresh attention was given to correct teaching. There was an increase of one third in attendance.

The titles of Discoverer and Founder really establish themselves by dint of what she did;but the fact that Mrs. Eddy is the continuing Leader of Christian Science demands proof in the life of every Christian Scientist.

Every Christian Science healing, every life consecrated to Truth through Science, every church service and activity held in compliance with the Manual, every instance of obedience to divine law as explained in Science, confirms Mrs. Eddy's place as Leader. A recognition of these facts is not worship of personality, but deep appreciation of the one who saw and presented to mankind the further unfoldment of the scientific truth of being demonstrated by the master Christian, Christ Jesus. 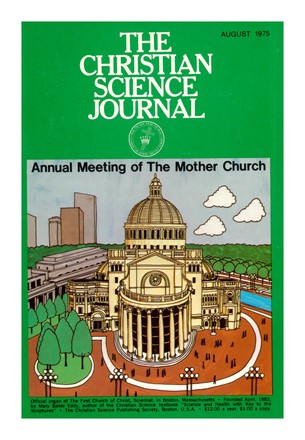 Above, Beneath, Around, and Through

Science and Health with Key to the Scriptures: Its Impact on Health

"The Midwives of Reality"

"How I teach my Sunday School class"

From Damascus to Antioch

Resisting the Resistance to Truth

When Compassion Is Needed

I came into Christian Science about six...

By Roland Lucian Mendis with contributions from Mercida Mendis | August 1975

One morning I awoke to find a large...

Several years ago over a period of many...

By Elizabeth Stark Joki with contributions from A. Dean Joki | August 1975

Thirty-five years ago when my first testimony...