Live Love —and you will find it will melt a heart of adamant.

For over two years, I was made miserable by my husband band's bitter opposition to Christian Science, when I finally awakened to the fact that it was not Christian Science that caused the trouble, but the lack of it in myself. "Zeal not according to knowledge" and lack of discretion in talking it, had caused the sense of discord; and when I learned to talk it less and live it more, the opposition ceased.

I have a little boy four and a half years old, born just after I became a Scientist, and, possessing a very quick temper. A veritable little hotspur, but overflowing with love for everybody when everything went smoothly with him.

He seemed to reflect the feeling of opposition to Christian Science, and at times would object to my talking it to him; so often my work with him would be the silent argument, but I never failed to take him and reason with him during his outbursts of temper.

Bravery and courage have always seemed to appeal to him, and finally the story of David and Goliath came to me in its higher meaning.

I gave him the Bible version of it, and then told him that "he too. could be a little David, and kill the Goliath of error that daily assailed him.

With God's Truth as his sling and a happy good thought as a stone, no giant however great, could withstand such mighty weapons."

It has worked like a charm, and although some days the little fellow meets a good many giants to battle with, there are other days when but one appears, and he is quickly vanquished.

It seems often like discouraging and uphill work, especially as our standard is so high in Christian Science, and not only our children, but we ourselves fall so far short of it, but I find we have to "grow to the stature of manhood in Christ Jesus."

We have everything to encourage us however, for if God be for us, who can be against us?"— K. S. C.

I first heard of Christian Science in the spring of 1891. I went to visit an aunt about twenty miles from home being in poor health I thought the change might benefit me.

For years I was ailing and gradually growing worse, and was trying to reconcile myself to what surely seemed my fate. Having been treated by different physicians without receiving help, and very little encouragement, I had given up hope of ever being well, unless God would heal me.

In reading my Bible I could not see why God could not heal now just the same as he did eighteen hundred years ago.

I was not willing to die, and was yearning for more light and a higher understanding of God. The church of which I was a member could not satisfy my hungry heart. I kept this one promise in mind, "Blessed are they which do hunger and thirst after righteousness: for they shall be filled." I prayed God would open my eyes to more light,— so was waiting.

One evening a short time after I arrived at my aunt's, a friend of hers who was a Christian Scientist called to see her. I overheard their conversation which was on Christian Science. Before the Scientist went away she gave my aunt two tracts; afterwards I picked them up. The first was, "The way to begin in Christian Science," and I read it through once. That was enough. I went immediately and put away my medical gods forever. I repeated the words in the tract, "God is my life, my health, my strength," and from that time denied to myself and others all physical suffering. Fear began to depart and the light began to dawn. At the end of four days I walked about half a mile to the Scientist's house.

I began to see that Life was God, and mortal mind had no power over me. I did not have a treatment from any one, but grew stronger mentally and physically.

All I had for eight months, of Christian Science literature was this tract and Rudimental Divine Science. Occasionally the Scientist would send me a Journal. At the end of this time I got "Science and Health." It was the pearl of great price I had been looking for and had found.—M. E. C.

I will try and give my experience in coming into the understanding of Christian Science.

I had been an invalid for about fourteen years, had tried doctors and medicine without any relief, had three operations performed, and continued to grow worse, until I gave up in despair, and had made up my mind there could be nothing done for me.

One morning I had made up my mind to try another operation, when just at that moment, a friend came in and said there was a Christian Scientist in town and wished I would try the treatment. I told her I did not have any faith that it would do me any good, but at last made up my mind to go and see the Scientist. After talking with her awhile I asked her to treat me and I bought "Science and Health."

I began to improve right away. I thought anything that did me so much good I wanted to know more about; I took up the study, read "Science and Health" every day and the Bible also. I became conscious, as never before, of the all-presence of God, and the nothingness of the wisdom of this world.

As soon as I was able I went through a class, and now I can do my own house-work, and not even feel fatigued.

My husband has been healed also of a claim of fifteen years' standing,—he is a firm believer in Christian Science.

We have six faithful seekers in this mining town, and we can realize that the Truth is working.

I think there was a sifting time with me after I had been in Science about two years. One of my old beliefs came back. I had a good deal of fear that I would pass on I thought I would have to send for another Scientist to treat me, but the thought came to me, Do your own work, God is everywhere present, all Life and Intelligence is of God, and not of matter.

Soon after I decided to do my own work, I was all right. I had been suffering for a week or more, previous to this time. It has never come up since, and I feel that I was entirely healed.— S. E. H., Park City, Utah.

Dear Mr. M.—Thinking you might be interested in the case of my wife whom you treated a year ago, I will state her case as it was, and as it is now.

She had been under the doctor's treatment for several years. In January, '92, she had an attack, after which she did not regain her strength. The latter part of April the doctor told her he was afraid she could not get well.

Up to this time she had been able to be up and around the house, but now she broke down and had not strength to stand on her feet. I then heard of Christian Science, and after consulting with friends, I broached the subject to my wife. She replied, "I will try anything. I know the doctors have done all they can do and I am getting worse all the time. I want to get well and will try anything."

I then called you in. She commenced to improve; she was more cheerful, her appetite grew better, and her strength increased. The change was gradual, and though I feared at first it was only temporary, it was permanent.

She is stronger and healthier than at any time I can remember. After this, can any one blame me for being a firm believer in the power of God, and for believing the Truth as shown through Christian Science?

Should you ever have occasion to refer any one to this case for proof you will always find us both "at home," and we will gladly give personal evidence of the health of your first patient.— George T. Hartman, St. Paul, Minn.

Life is God, and God is all. Is there any mutation then in Life? any descending scale? And does not man (the spiritual man) reflect that Life? The Life which is God is a Life whose tide never ebbs, whose dawning, though to mortal sense feeble, will grow brighter and brighter unto the perfect day. The suggestions that Life can grow old are part of the temptation we must all meet and resist in the wilderness of mortal doubt and fear.

Can we not all testify to a quickened sense of Life since we gained an understanding of this blessed Science? Does it not seem sometimes as though the shadow had been turned back on the dial of our lives? No! dear friends, there is no decline in the life supernal. God is our habitation, and his years are from everlasting to everlasting, and man coexists with and reflects God.— Mrs. A. P. Warner.

Dear Journal:— One of the members of the "Massachusetts Metaphysical College Association," called on me last week and remarked that as the meeting "of the Association had been adjourned until next June, he would send ten dollars to the Church Building Fund, as it would have cost him that sum to have attended the meeting. Is this not a good example for the rest of us? —Mrs. A. M. H., N. Y. 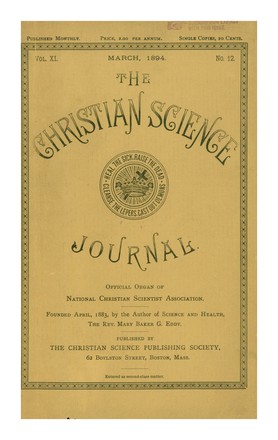 A GREAT MAN AND HIS SAYING

THE TEST OF TRUTH

There dwells one bright immortal on the earth,...

THE MOTIVE FOR AND METHODS OF WORK

THE ABIDING PRESENCE OF CHRIST

WHY CAN'T I PROGRESS

Santa Claus is under the ban in Janesville

There are three points in connection with the above lecture...

"CHRISTIAN SCIENCE" AND THE COURTS

with contributions from Jane Porter | March 1894

The History of the World's Parliament of Religions, by the...