My husband and I have found Christian Science to be a bedrock in our lives. Its teachings provide a sure foundation for fulfilling and joyous living.

I was raised in Christian Science but only took up the serious study of it after reaching adulthood. My husband was acquainted with Christian Scientists as a child and began to investigate its teachings when we were engaged to be married. Since then we have relied on God to meet every need, whether it was a financial difficulty, a relationship problem, an employment situation, or some physical incapacity. We have found our Father-Mother God's all-powerful love able to uphold and sustain us in every circumstance.

I would like to share two healings that have been milestones to us. Eight years before I met my husband, Rich, he had a business that involved operating a tractor. One day, while he was driving the tractor, it slid down a steep embankment and came to a jolting halt. My husband sustained an injury to his back. The doctors called it deceleration trauma to the spinal column. Surgery was of questionable help and could possibly be detrimental; therefore it was not recommended. It was suggested that he rely on painkillers to ease the pain.

After one week of taking these he discontinued using them, finding they brought him no relief, nor did he like the side effects they produced. He sought an alternative cure and began visiting a chiropractor. At first he had to have daily back adjustments to be free from the pain. Gradually these adjustments decreased. When I met him in 1986 he was having them once every two weeks. He was told that he would probably need these adjustments for the rest of his life.

At the time of our marriage, Rich had begun to study Christian Science. But he was still struggling with this painful back difficulty. As the time for a back adjustment would draw near, he would be unable to get comfortable or to sleep for days because of the pain. After an adjustment he would feel very relaxed and would sleep for almost a whole day. I remember that it was on one such occasion when he was suffering that I gave him an article from an issue of the Christian Science Sentinel to read. After about fifteen minutes he came to me and told me that an adjustment had taken place as he read, and he was free from the pain. We were deeply grateful and rejoiced together for this evidence of the power of Truth to destroy pain. I encouraged him to turn to God and seek the full and permanent healing. Very quietly and without my knowing about it, he began to do just that.

About five months later I was writing out bills one day. I noticed that we didn't have a doctor's bill for that month. When I asked my husband about it, he told me that he had decided to pray about the condition. He also said that at church services he'd been listening specifically for healing truths that would help him. Especially helpful to him were the Bible stories of David and Goliath and of Christ Jesus' healing of the man at the pool of Bethesda, who had been incapacitated for thirty-eight years. These stories had encouraged him because they helped him to see that there is no condition so large or so long-standing that it is beyond God's power to heal.

He began to watch his thoughts and to challenge any that were not in accord with what he was learning of God. Rich was challenged once more with a return of the pain. He woke me in the night and asked me to pray with him. We prayed together, and I turned to God acknowledging His presence and all-embracing love. A few moments later my husband was asleep. That was the end of the condition. That was over two years ago, and Rich is fully healed.

I was overjoyed to witness this healing. I have seen many healings, but this one stands out to me because I saw that it was the power of God alone that healed my husband. While we are always grateful for the loving support of Christian Science practitioners in a time of need, in this case the healing occurred as Rich learned of his inseparable relationship to God.

For myself, a milestone healing was that of a throat condition. My throat had become sore and swollen. I asked a practitioner to pray with me. My husband was also tenderly caring for me. At this point I couldn't speak or swallow. Discouraged and in pain, I lay on the couch feeling sorry for myself. My husband had to leave briefly to run a few errands. Before he left he said to me, "You can lie on the couch and cry, or you can get up and beat this thing." I was stung by what seemed to me to be his indifference to my misery. But after he left I recognized his comment as a loving rebuke and as a call to prayerful action on my part.

I decided I could at least sit in my rocker by the window. Very gently, as I rocked, I felt as though God were speaking to me. It was as though a light were turned on. Many thoughts of peace and of God's unfailing love for me flooded my thought, as though a dam of darkness had broken. A moment later I realized that I was free from the pain and that the whole condition was healed. When Rich returned home shortly thereafter I was fairly leaping to tell him that I had been healed.

This healing has meant so much to me because I saw that when I was willing to rise, willing to listen to God, and willing to be healed, I was healed. God is always helping us and loving us, and I just needed to see that and to respond to that love.

We are deeply grateful for these healings! So often we acknowledge to each other that all the good our lives include is the result of our growing understanding of God and His goodness as taught in Christian Science. We are indebted to our Master, Christ Jesus, who taught us how to pray to our Father-Mother God. We are grateful to our Leader, Mrs. Eddy, for discovering the divine laws of God that bring healing and regeneration to our lives. But most of all we are grateful beyond words for our heavenly Father and His unfailing love.

I am Karen's husband and am happy to verify her testimony. I can testify that my healing took place as she has stated. Evidence of the complete healing is that I work part time on a farm. This requires me to perform many chores involving heavy lifting as well as operating a tractor for long hours and baling hay. I am grateful to say that I am able to do all of this freely and with no recurrence of the former trouble. 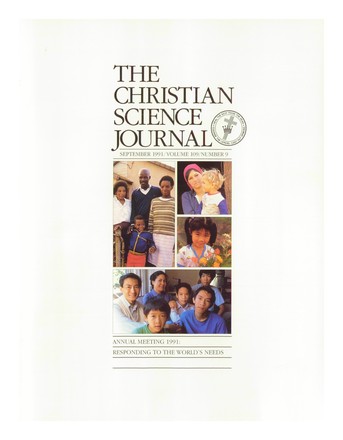 Annual Meeting of The Mother Church 1991

What is the purpose of a branch church?

Do you have a good reason?

The Christian Science college organization: what can it offer you?

This morning I swam a whole mile! The milelong...

I wish to express my gratitude to God for the...

My husband and I have found Christian Science...

By Karen Elizabeth Bund Neff with contributions from Richard A. Neff, Jr. | September 1991

"What, time I am afraid, I will trust in thee

It has been a privilege to have the help of...

I am very grateful that my mother became...