It seems as if not a day goes by now without news reports of evil spreading in forms such as contagion, hatred, corruption, abuse, mass killings, or terrorism, leaving many people feeling helpless. At the same time, however, we are seeing, worldwide, more people praying together for health, peace, justice, and freedom. But too often the picture does not look hopeful.

Perhaps this is because the tendency is to define evil based on what we see and hear, such as TV images of violence or reports of disease, and then we attach evil to certain individuals, causing a division when people start pointing a finger at each other. But the real enemy is not who or what the physical senses perceive, but what is behind it—the mental state. In order to subdue the effect of evil and prove it powerless to destroy good, we must understand the aggressively deceptive nature of evil.

Evil is the false suggestion that we each have a personal mind, resulting in many minds and wills, some evil and capable of manipulating other minds. But God, infinite good, is the only Mind governing each one of us, and this is the only true power.

Evil assumes reality in our thought by acting like a terrorizing bully—presenting threatening or seductive pictures of certain people, places, or things, over and over again, until we give in and let it control us; then it seems to have power. It often appears that prominent people or big businesses use these images in deceptive or malicious ways in order to gain or maintain control over public thought.

Mary Baker Eddy writes in her textbook, Science and Health with Key to the Scriptures, “No mortal mind has the might or right or wisdom to create or to destroy. All is under the control of the one Mind, even God” (p. 544).

This was not a convenient theory she espoused, but rather a truth she had proven many times, beginning in her childhood. She demonstrated the powerlessness of this “bully” called evil when she was around eight years old and attending a one-room schoolhouse with children of all ages. One of the older girls bullied others, terrorizing even the boys. One day this girl came to school with a hollowed-out cucumber, filled it with muddy water, and demanded that the other children drink from it.

Little Mary stood in her way and exclaimed, “You shall not touch one of them.” The girl yelled at her, “Out of my way or I will knock you over.” But Mary planted her feet, crossed her arms, and replied, “No, you will not lay a finger on me nor harm one of them.” The girl’s threats had become ineffective. She wasn’t accustomed to being stood up to, let alone by a little girl! The girl put down the cucumber and told Mary she was brave, before giving her a hug.

We each can prove the powerlessness of evil in any form.

Mary didn’t stop there. She continued standing up to this girl whenever she threatened anyone, until finally the girl’s aggressive nature totally changed (see Irving C. Tomlinson, Twelve Years with Mary Baker Eddy, Amplified Edition, pp. 4–5).

Mrs. Eddy later wrote: “The confidence inspired by Science lies in the fact that Truth is real and error is unreal. Error is a coward before Truth” (Science and Health, p. 368).

What makes evil seem so real and powerful? The pictures ascribed to it by the carnal mind or five physical senses. They present evil personalities, destructive forces of nature, regions with great suffering, or statistics describing a spreading contagion—and suddenly these pictures take on a life of their own in our thoughts. But Mrs. Eddy explains: “Evil has no reality. It is neither person, place, nor thing, but is simply a belief, an illusion of material sense” (Science and Health, p. 71). Evil seems to have presence, power, and influence only because its pictures of suffering or death impress our thought. If we take in these images and accept them as a power, they seem to control us, through fear.

In the Bible, three prominent images or symbols used to represent or explain the nature of evil are the serpent, the devil, and the dragon.

In the beginning of the Bible, the serpent is subtle, deceiving, and destructive, though it actually had no power to harm the two characters in this allegory, Adam and Eve (see Genesis 3). All it could do was suggest that God had been deceitful when He warned Adam not to partake of the false teaching of dualism—the tree of the knowledge of good and evil. The serpent told Eve that instead of this dualistic teaching leading to death, it would actually make them very wise and powerful (like gods) if they would accept matter and evil as real powers. But it was a lie! Instead this knowledge led only to shame, loss, and a curse that caused them a lifetime of suffering.

This allegory of the serpent was a direct contradiction of the account of creation in Genesis 1, which says that Spirit alone creates, that everything Spirit creates is very good, and that God’s work is finished, complete. There is only one God, so there can be only one creator, and one creation, which is entirely good and perfect.

In the New Testament, we find another representation of evil as the devil, or a negative influence tempting Christ Jesus to worship self, or matter, or evil as powers that could benefit him (see Matthew 4:1–11). In one scenario, the devil tempts him to jump from the top of the temple to prove God’s protecting power. If the devil (evil) had any power, it would have pushed him off; but all it could do was suggest he jump! Each time Jesus is tempted, he counters the devil’s specious reasoning by appealing only to God’s law, God’s will, and God’s government. He finally silences the devil, by firmly stating, “Get thee hence, Satan,” and divine inspiration (angel messages) floods his consciousness, enabling him to begin demonstrating the power of God, good, to preserve and redeem mankind.

In Revelation evil again appears, this time in the form of a dragon with seven heads, seven crowns, and ten horns, attempting to control and destroy everything good (see chapter 12). But the Christ, Truth, casts the dragon out and eventually destroys every manifestation of evil.

Mrs. Eddy explains: “We may well be perplexed at human fear; and still more astounded at hatred, which lifts its hydra head, showing its horns in the many inventions of evil. But why should we stand aghast at nothingness? The great red dragon symbolizes a lie,—the belief that substance, life, and intelligence can be material. This dragon stands for the sum total of human error. The ten horns of the dragon typify the belief that matter has power of its own, and that by means of an evil mind in matter the Ten Commandments can be broken.

“The Revelator lifts the veil from this embodiment of all evil, and beholds its awful character; but he also sees the nothingness of evil and the allness of God” (Science and Health, p. 563).

Revelation ends with John’s vision of a new heaven and new earth where there is no night, no pain, no lack, no death—no evil. All is light and goodness, because John recognized that God, Spirit, infinite good, is supreme, right here and now.

Mrs. Eddy proved this to be true over and over. Once an armed man came to her door but was unable to carry out his plan to harm her. And, when a group of fifty spiritualists stayed up all night praying for her to die, her prayers were a complete protection to her (see We Knew Mary Baker Eddy, Expanded Edition, Vol. I, pp. 48, 172).

She writes: “God is not the creator of an evil mind. Indeed, evil is not Mind. We must learn that evil is the awful deception and unreality of existence. Evil is not supreme; good is not helpless; nor are the so-called laws of matter primary, and the law of Spirit secondary. Without this lesson, we lose sight of the perfect Father, or the divine Principle of man” (Science and Health, p. 207).

A number of years ago, while I was an attorney, I represented a woman in a contentious divorce case. As the case dragged on, the woman told me that her husband practiced witchcraft and kept saying he was going to put a curse on both of us. At the time, I simply dismissed it, thinking witchcraft has no power; however, I failed to address it in prayer in order to understand why it does not have any power.

Soon after my client had made me aware of this threat, I woke up in the middle of the night feeling as if I were being stabbed in my heart. I couldn’t breathe, and the pain was intense. I grabbed the phone and called a Christian Science practitioner. Very quickly the pain went away, and I went back to sleep. However, I was again awakened, and this time the pain was excruciating, as if I was dying. I immediately turned my thought away from the material sense of a suffering body, and instead lifted my thought to God. The thought came to me to handle the belief of witchcraft.

I immediately remembered that God, Spirit, infinite good, is the only Mind, and therefore the only Mind having power to govern anyone. Because there are not many minds, there can be no transference of mortal, hateful, or destructive thoughts from one so-called mind to another; I do not have a separate mind of my own that could be controlled by another mind. Evil is never person, place, or thing, and God communicates to man only life, health, and peace. Evil can have no power, since God, good, is All-in-all; therefore, I am secure every moment in divine Love’s unfailing care.

The pain went away, and I felt fine again. That was the end of the attacks. The trial moved forward quickly after that with a very harmonious resolution.

I was so grateful for the understanding Christian Science brings to us of the omnipresence and omnipotence of God, good. This light of divine goodness fills all space, dispelling the darkness of hatred, dishonesty, disease, and destruction; and there is no place where the light of infinite good cannot be seen and felt. We each can prove the powerlessness of evil in any form when we realize that God’s government of all creation is supreme, absolute, and entirely good and harmonious. When we stand firm in our understanding of that truth with selfless love for God and humanity, healing is assured. 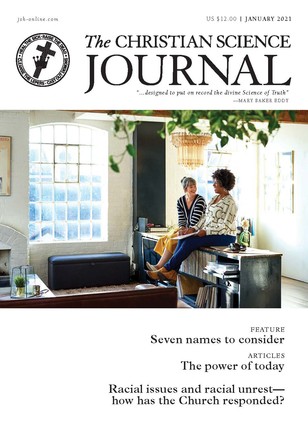 The power of today

Dispelling the shadow of fear with the light of Mind

Racial issues and racial unrest—how has the Church responded?

The breath of God

Moving beyond shame and regret

By Heidi Dufresne with contributions from Andrew Dufresne | January 2021

A healing in the Reading Room

Healed of injuries from a fall

Who, me? Write for the periodicals?

Progress this year—spiritual and certain