As a means of self-improvement, I have been doing a refreshing exercise lately: Throughout my day, I am simply noting every single instance when I mistakenly think or say something that would suggest evil is a real and acting power. I was prompted to begin this exercise when I read of Christ Jesus’ response to Pilate after he declared that he had the power to bring about Jesus’ death. The Master said: “Thou couldest have no power at all against me, except it were given thee from above” (John 19:11).

Why would Jesus say such a thing? Aren’t evil powers real? After all, we see apparent evidence of them in action every day. Was Jesus just timidly ignoring what exists and is dangerous?

We might consider that perhaps Jesus understood something about the universe that wasn’t so obvious to the person threatening him. Was Jesus aware of a presence—an all-presence—that actually and thoroughly precludes the existence of evil?

Jesus hinted at his knowledge of the omnipotence of good when he said, “All power is given unto me in heaven and in earth” (Matthew 28:18). God, as Jesus often proved, is the single power in existence. God’s utter and unchallengeable goodness was the foundation of Jesus’ mentality, and therefore of all his healing work. God is one, a single power, who is not diluted good, but always entirely and fully good.

As an example of how Jesus perceived God’s power and God’s creation, at one time Jesus and some of his students encountered a person who was born blind (see John 9:1–7). The students immediately assumed that the evil, the blindness, was legitimate, even justifiable.

Jesus, however, saw the case quite differently, as was obvious by the way he began talking about how not evil, but the works of God, would be seen in the man. If God were an amalgamation of evil and good, then blindness could be an expected element of His creation. But Jesus’ awareness of God’s purely good nature precluded the option of admitting the presence of evil in anyone or in any place.

This spiritual standpoint had a profound effect. Very quickly the man was able to see just fine. Besides astounding the individual who was healed, this experience must have made an immense impact on those students. As supremely unjust as congenital blindness seemed, the students observed how Jesus didn’t acknowledge, even slightly, what appeared as an action of evil. For Jesus, there was no need to petition God to battle unjust evil; there was only a need to acknowledge in prayer that the only power and presence that ever had any standing in the man’s life had always been God’s total goodness—the “works of God,” in other words. Through this prayer, it was not real evil, but the lie that evil is real, that was corrected.

Was Jesus aware of a presence—an all-presence—that actually and thoroughly precludes the existence of evil?

Is recognizing clearly the unreality of evil—and the absolute reality of God, good—something reserved only for a select few? No, this knowledge is for everyone. In her book on Christian healing, Science and Health with Key to the Scriptures, Mary Baker Eddy says: “Our Master cast out devils (evils) and healed the sick. It should be said of his followers also, that they cast fear and all evil out of themselves and others and heal the sick. God will heal the sick through man, whenever man is governed by God. Truth casts out error now as surely as it did nineteen centuries ago” (pp. 494–495).

This encouraging perspective is the reason why I am challenging myself to be more consistent in identifying within my thoughts and observations any instances when I mistakenly assume the legitimacy of evil. I find I have to remain aware of where I allow my thoughts to go. But knowing that God, good, is the sole power and presence keeps me clear on the fact that impressions of supposedly real, acting evil are delusions rather than facts.

The suggestions of evil’s reality are subtle sometimes. Even though one solidly recognizes that God alone is real, nevertheless, at times inaccurate suppositions about God and evil might result in thoughts such as these: “Evil sure is screaming at me today”; “Evil is having its way with me”; “Evil is doing this and that to me or to those I love”; “Evil wants to and is trying to thwart the good in my life.”

These are things that one would never hear Jesus say. If evil were a power or a personality, Jesus would have told us all about it. He would have explained that the First Commandment is wrong, and that there exist wicked powers to threaten and harm both God and God’s creation. Such notions may certainly seem true to a limited, mortal perspective, yet they remain forever false and a departure from Christianity.

What are some useful steps in freeing ourselves from entrenched, erroneous, and habitual beliefs in evil? Here is one unique, prayer-based approach: When a belief in evil seems ingrained, simply try observing each time you happen to think or utter something that implies evil’s validity. In my own practice, I have found that this approach helps me not to identify with the lie personally and directly, since the lies are more clearly seen as powerless suggestions with no actual source. This makes it easier to replace erroneous thoughts with true ones, which inspires an awareness of God’s all-power. Soon, your thoughts will improve spontaneously!

Mary Baker Eddy writes: “Error found out is two-thirds destroyed, and the last third pierces itself, for the remainder only stimulates and gives scope to higher demonstration” (Miscellaneous Writings 1883–1896, p. 355). Understanding that evil thoughts have no source and no foundation, we better understand how it is that God alone is power.

Following Jesus’ example, we all can recognize clearly that evil could only have power over us if God gave it power—something that is impossible for God, who is only good. Gratefully, within all of God’s creation, and in every case and moment, only “the works of God”—the works of good truly exist and are ever in authority. 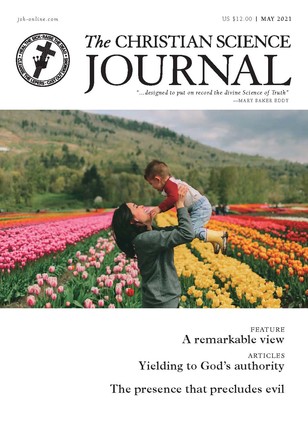 Omnipresence: God’s presence embraces our past, present, and future

The presence that precludes evil

The practicality of the dragnet parable

How do you know when healing has happened?

Forgiving is for giving

Man was never born into matter

Always together under God’s roof

Prayer of a new Reader

Freed from anger and smoking

Second-rate, or valued by God?