The Bible often presents us with stories of conflict, of individuals confronted by opposing powers and points of view. Often these involved powerful kings, but also conflicts between brothers, husbands and wives, parents and children.

In a conflict, be it with a friend, family member, spouse, employer, or government, the temptation can be to argue and stake out a position, to assign blame and strategize for success. We may think we are right and want to hold our position. Or we may try to compromise. But trying to reconcile conflicts can be problematic. Stories and teachings in the Bible, as well as the writings of Mary Baker Eddy, the Discoverer and Founder of Christian Science, suggest that instead of arguing or trying to conciliate opposing points of view, we need to first lift our view above the conflict.

In the Bible, Joseph didn’t have the opportunity to argue when his half brothers sold him into slavery. There is no record of Joseph’s rancor. There is only testimony of his faithfulness to God and to his highest ideal of manhood. Even when he was unjustly accused by his master’s wife of seducing her and then thrown into prison, there is record that Joseph remained committed to a spiritual course in his life. The Bible tells us, “The Lord was with Joseph, and shewed him mercy, and gave him favour in the sight of the keeper of the prison” (Genesis 39:21).

When the Pharaoh asked Joseph to interpret his dreams, Joseph answered, “It is not in me: God shall give Pharaoh an answer of peace” (Genesis 41:16). Acknowledging God as the source of wisdom, Joseph foretold the famine ahead. He was appointed second in command and executed the plan that saved the nation and also his brothers. Understanding God as the governing power in his life, Joseph demonstrated his life and purpose were in God’s hands, not at the mercy of others.

Nehemiah, who rebuilt the shattered walls around Jerusalem, also listened to God and had the wisdom not to come off the wall and engage with those trying to undermine his mission. “I am doing a great work, so that I cannot come down: why should the work cease, whilst I leave it, and come down to you?” (Nehemiah 6:3).

In the New Testament, Jesus is recorded as walking through an angry mob who sought to hurl him from a cliff because of his preaching. Rather than stopping to argue, Jesus continued on his way. “But he passing through the midst of them went his way, and came down to Capernaum, a city of Galilee, and taught them on the sabbath days. And they were astonished at his doctrine: for his word was with power” (Luke 4:30–32).

The common element in these stories is the individual faithfulness in serving God first. This commitment to a higher governing Principle guided their decisions and actions and kept them from being distracted by the arguments and schemes of others. This is underscored in the teachings of Christian Science: “Follow the directions of God as simplified in Christian Science, and though it be through deserts He will direct you into the paths of peace,” Mrs. Eddy advised one of her students regarding a conflict (The First Church of Christ, Scientist, and Miscellany, p. 361).

Instead of arguing or trying to conciliate opposing points of view, we need to first lift our view above the conflict.

Healing activity follows this spiritual commitment. Jesus, Mary Baker Eddy, and many in the Bible approached their endeavors with a spiritual outlook, lifting their thought and view above the conflicts around them. They relied on spiritual law, which is based on the governing Principle that is Love, to protect and guide them. They looked up for direction, not out at the conflict. When they followed this spiritual course, aggression had no power over them.

How can we do the same in a personal conflict? How do we lift our thought above the fray to see God’s man and woman in ourselves and others if we’re in the middle of a dispute?

A few years ago I found myself in a confrontation with a close family member, which arose suddenly and, in my view, without cause. I felt unjustly accused and spent days arguing with this individual in my mind. Distance arose between us. I was happy to go my way, but not with a very loving thought. When I’d try to pray about the situation, I would inevitably return to the argument. The Bible instructs, “Be ye therefore followers of God, as dear children; and walk in love” (Ephesians 5:1, 2). To walk in love was my goal, but that goal and the justification of my position weren’t in harmony. I had to make the goal of walking in love my first priority and trust the outcome.

I found guidance in Science and Health with Key to the Scriptures by Mary Baker Eddy when she notes: “What is the model before mortal mind? Is it imperfection, joy, sorrow, sin, suffering? Have you accepted the mortal model?” Citing the difficulties engendered by this, she then goes on to say: “To remedy this, we must first turn our gaze in the right direction, and then walk that way. We must form perfect models in thought and look at them continually, or we shall never carve them out in grand and noble lives.”

I had to consider what qualities I was seeing in this person and in myself and strive to see God’s child, His spiritual image, instead. Mrs. Eddy again offers guidance: “Let unselfishness, goodness, mercy, justice, health, holiness, love—the kingdom of heaven—reign within us, and sin, disease, and death will diminish until they finally disappear” (Science and Health, p. 248).

Every time this individual came to mind, I no longer let my thought race back to the argument. Instead I affirmed the nature of God that we both reflected—love, purity, spiritual understanding, unselfishness. Our identities were spiritual, not a result of family history or opinions.

At one point another accusation arrived. I answered quietly: “That is not true. You know it, and I know it. None of this is true about who I am or about how I think about you.” This time I was responding not as an argumentative family member, but as someone who had lifted thought above the fray and could see us both as the loving and loved idea of God, His reflection.

That was the end of it. That quickly and that simply. The person responded, “Thank you.” The conflict that had lasted for months was over in minutes, without arguing, once the misconception was dissolved and the true conception for both of us took its place.

Prayerfully approaching a conflict doesn’t necessarily mean our view prevails, but it does mean that we are opening our thought and listening. As thought lifts spiritually and we seek to “follow the directions of God,” we find ourselves embracing the higher ideal of man and woman rather than focusing on a flawed person—be that person ourself or another. We can mentally step away from a conflict even if we can’t always remove ourselves physically. Sometimes we may agree to disagree on the specific dispute. But we can always agree to and affirm the spiritual unity of ourselves and others with the governing Principle of Love.

In our relationships with individuals and with the larger world, we can strive to “walk in love” and trust the divine Principle of Love to show us the way. 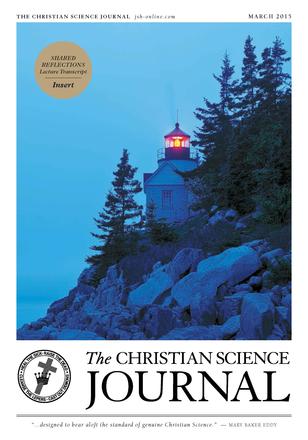 The healing role of divine Science in sports

'The universal solvent of Love'

Reflection: radiating from the divine source

Maintaining and defending our healing mission and practice

Lifting our view above the fray

In the Shepherd’s view

In perfect harmony with a fellow musician

By Laura Lochen with contributions from John Lochen | March 2015

Church united in praying for the community