My son is clever, very hardworking, and a good person, but he stands out as not being one of the boys because he doesn’t drink and is not much interested in sports. Perhaps for this reason, his supervisor seemed to take pleasure in publicly ridiculing him. This man would swear at my son and call him an idiot in meetings, and belittle his work.

For a long time my son turned the other cheek. He had been raised in Christian Science and was reasonably confident of his own nature as a child of God, so he refused to be cowed by this relentless bullying. But at one point the supervisor’s persecution had gone so far that it seemed an important project my son was working on would be voided. At this point he asked me to pray for him, applying what I have learned in Christian Science.

We talked about the spiritual fact that there is only one Mind, God, and that it is important to see everyone, not just ourselves, as the expression of that Mind. My son was responsive to these ideas.

After he left, my prayerful work began. I had to admit that after hearing my son talk about this situation many times, I had built up a lot of resentment toward the supervisor. I was mesmerized by the narrative that a cruel person was victimizing my son.

At that point I thought about the “Daily Prayer” found in the Manual of The Mother Church by the Founder of Christian Science, Mary Baker Eddy. While this is a prayer that can benefit all who pray it, the Manual especially charges members of The Mother Church with praying it daily. Like a good mother preparing her children to meet the demands of daily life, Mrs. Eddy wrote: “It shall be the duty of every member of this Church to pray each day: ‘Thy kingdom come;’ let the reign of divine Truth, Life, and Love be established in me, and rule out of me all sin; and may Thy Word enrich the affections of all mankind, and govern them!” (p. 41). Rightly understood and sincerely obeyed each day, this By-Law nurtures, strengthens, and protects us, as well as everyone our thought rests upon.

In regard to the problem my son faced at work, it was these words that stood out to me: “. . . let the reign of divine Truth, Life, and Love be established in me, and rule out of me all sin. . . .”

Suddenly I saw the need for correction in my own thinking. I realized that it was not God narrating this disturbing drama, but mortal mind—the term Christian Science uses for a material mentality opposed to God. However, the divine Mind is infinite and precludes any other source of thought, so the so-called mortal mind is false, unreal. God knows every one of us only as the perfect expression of Himself.

I saw that I had a choice to make. I couldn’t go on claiming that God, divine Love, is the only Mind and that we are all created in God’s image and likeness, and at the same time accept the notion that a bully also exists. That would be like saying that God isn’t really all, and that each of us has a mind separate from God—a mind that knows things God does not know.

I could not hold two opposing beliefs, so I had to choose whether I would see only the perfect man of God’s creating, or be tempted to believe that some people are not perfect and maybe even abusive. I chose God’s view. I refused to accept the story mortal mind was presenting. I didn’t have to love the supervisor’s behavior; I had to see through the illusion and know that this man was the loving and lovable child of God. When I sided with God, I found my peace, and the resentment I’d been feeling melted away.

When my son returned to work after the weekend, he found the whole situation had changed. This man was just as a supervisor should be—supportive, kind, helpful. There was no bullying. And there was never a return to that old behavior. In fact, the supervisor went out of his way to be helpful. He even began praising my son publicly for the high quality of his work.

Now, three years later, even though my son has moved on to another position, these two still have a warm and supportive relationship. My son counts him as a close friend, a confidant who can be relied on, and someone who values him as a person.

Until recently I had never met this man, but I loved him, though not in any personal sense. I loved him because I refused to see him as anything but perfect, as God sees him. This is how I show my love for God—by loving His spiritual reflection. Not only did I find my peace, but my son completed his project harmoniously, and his supervisor demonstrated his true selfhood. God’s Word had enriched the affections and governed us all.

I couldn’t go on claiming that divine Love is the only Mind, and at the same time accept the notion that a bully also exists.

Divine Love is large—in fact, infinite. It encompasses all humanity. It has no shadow of lust or materialism; it is purely spiritual. It is impartial, tender, kind, generous, merciful, loyal, forgiving, unfailing, constant, pure. But to really understand Love, we must reflect it in our everyday lives.

To love this way doesn’t mean that we love mortal mind or its unsavory traits; it means that we love large enough to see through the mortal picture and recognize only the real identity of everyone. Using the term man in its all-inclusive sense, Science and Health with Key to the Scriptures by Mary Baker Eddy explains: “Jesus beheld in Science the perfect man, who appeared to him where sinning mortal man appears to mortals. In this perfect man the Saviour saw God’s own likeness, and this correct view of man healed the sick” (pp. 476–477).

In this prayer we are asking that divine Truth, Life, and Love be established in us. We are not just dipping our toe into the water, here; we are not asking for half-measures. When we pray this sincerely, we are expressing a total commitment to the rule of God—a surrendering of all sense of ourselves and others as material and mortal personalities.

It might be tempting to rush through the “Daily Prayer” quickly in the morning, but it is a prayer for the whole day. It is a gift of daily inspiration from Mrs. Eddy to anyone who reads it and takes it to heart, and to Christian Scientists this daily duty is a gift of armor that their Leader has given them. Each statement lived faithfully opens up new views of God and brings evidence of God’s kingdom into our daily experience. 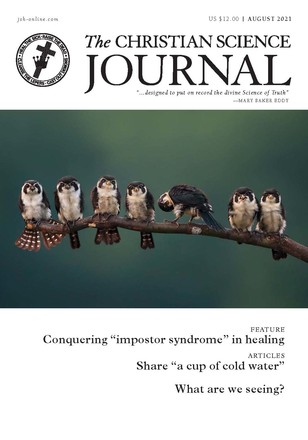 The chaos of mortality, or the cosmos of immortal Mind?

What are we seeing?

Side with God’s goodness

Being as “harmless as doves”

from the CHRISTIAN SCIENCE BOARD OF LECTURESHIP | August 2021