Occasionally, even students of Christian Science who have demonstrated its healing truths for many years may find themselves faced with the question, either for themselves or for another, whether to stay with Science or, in a particular situation, to have medical help. Some circumstances require immediate action, and the arguments to turn to medicine may appear strong and even reasonable. At such times it is helpful to have thought the matter through before the need arises.

In Science and Health Mrs. Eddy writes: "The universal belief in physics weighs against the high and mighty truths of Christian metaphysics. This erroneous general belief, which sustains medicine and produces all medical results, works against Christian Science; and the percentage of power on the side of this Science must mightily outweigh the power of popular belief in order to heal a single case of disease."Science and Health, p. 155; When the suggestion comes to turn to medical means, might it not be helpful to ask ourselves what is doing the suggesting? Is the source of the suggestion our own thought or "the universal belief in physics"?

Christian Science heals by recognizing that what appears as sickness is a mistaken mental concept objectified as a sickness or disease. It teaches how to replace the mistaken view in consciousness with the spiritual facts of spiritual perfection until the unreality of the discordant condition becomes apparent and bodily health is restored.

We need not only a deep, earnest desire to know and do right but also a willingness to go beyond this to a recognition and an acknowledgment of what is spiritually true. Healing occurs when the unreality of the disease is recognized, and the reality of spiritual good appears. That is why it is a misstatement of Christian Science to say it heals simply by declaring that there is no sickness. The material fable must be replaced by the spiritual fact.

Medical practice, on the other hand, treats the effect of the mistaken concept rather than the thoughts that appear to produce it. It puts ointment on the injured leg, massages the muscles of the limp arm, prescribes medicine, and so on.

What examples did Jesus give us? He commanded the man with the withered arm, "Stretch forth thine hand."Matt. 12:13; And the man did. Neither blind Bartimaeus nor the man with dropsy required medication for healing. Christ Jesus said plainly, "He that believeth on me, the works that I do shall he do also,"John 14: 12; addressing not only his disciples but all who believe on him. Today Christian Science is carrying on these works.

When matter is seen as a limited and mistaken concept, the necessary way to remove what appears as disease is not to do something to matter but to change the thoughts behind both the belief in matter and the belief in disease. Doing something to matter only reinforces the belief that matter exists and is self-acting. Material means enthrone matter and break the second commandment by bowing down to graven images. Does this line of thinking really heal? The best it can do is to exchange one belief for another, leaving the patient with an increased belief in the power of matter. Such methods are like trying to remedy a poor slide projection by doing something to the screen.

A relative of a patient who was having Christian Science treatment once said to a practitioner, "Now you just go and pray for her while I see that she has medical help. Then she will get the good from both." But it doesn't work that way. One cannot use both Christian Science and material medicine. The two methods require opposite approaches. Christian Science turns thought away from matter to Spirit for healing. Medical practice, on the other hand, turns attention toward matter. How can thought turn from and to matter at the same time? Can one serve two masters?

Since medical practice comes under many masks, the wise student learns to be alert to them. Even a glass of water might be considered medicine if taken with a health motive in mind. So might exercise if it is designed for anything except expressing the joyous freedom of true activity. For example, a Christian Scientist under nursing care for a broken bone, unable at the time to move freely, might be faced with the decision of whether or not to use a trapeze suspended above his bed. Before he could decide, he would need to clarify what his motive would be in such use. Would it be to gain strength in his muscles through exercise? Or would it be to express the strength and activity he already had in the only way then available to him, and to assist the nurses in caring for him by helping to lift himself?

In the same way, alertness is needed in reteaching patients to walk or to use other lost skills, such as speech or reading. Teaching may rightly be done by walkers and by games or handicraft that afford opportunities to retrain. But we need to remember healing is not accomplished through physical massage, hot or cold packs, or manipulation. Reteaching from the premise of man's present perfection is a joyous and happy activity for both patient and nurse, and it is filled with daily successes.

And what about diet? Overweight is never really corrected by calorie-counting. A sense of frustration, of insecurity, or a vain search for answers is often behind the habit of overeating. These errors, once corrected with spiritual truths, will then no longer govern, and the condition can be truly healed.

Sometimes arguments present themselves as reasons for turning from Christian Science to medical methods. For example, a relative may say, "The doctor tells me that by taking this little pill once a day you'd soon be entirely free." Free from what? From believing that matter is self-acting and can get out of order? From believing that matter is the arbiter of health and that health is limited?

Or perhaps the argument is in favor of an operation. Isn't the operation of Principle more effective than a surgical operation? Mrs. Eddy writes, "The physical healing of Christian Science results now, as in Jesus' time, from the operation of divine Principle, before which sin and disease lose their reality in human consciousness and disappear as naturally and as necessarily as darkness gives place to light and sin to reformation."Science and Health, p. xi;

If family pressure is strong, we might ask ourselves why we should be the ones expected to turn from our convictions. Sometimes, however, these arguments may be excuses for our own fears, our own doubts that Christian Science can be relied on to heal. If this is so, our best course might be to acknowledge them and then without excuse take whatever steps seem right to us at the time. Let us not condemn ourselves but learn whatever lessons are to be gained from the experience. However, let us be sure we are making our own decision. Medicine's influence is felt through advertising, health columns, legal requirements, and its claim to authority. How the human mind likes to be told what to do, especially by an "authority"! It is then relieved of decisionmaking and the responsibility for the consequences. We see this search for authority expressed in many ways today. Let us ask ourselves what authority we are acknowledging. Is it a sound one?

There should be no condemnation toward those who choose the medical way. The fact is, however, that sooner or later all must find reliance on medicine to be only a detour and discover that it is only by applying spiritual facts that they can find lasting health. Mrs. Eddy writes, "If patients fail to experience the healing power of Christian Science, and think they can be benefited by certain ordinary physical methods of medical treatment, then the Mind-physician should give up such cases, and leave invalids free to resort to whatever other systems they fancy will afford relief." Later she continues, "If the sick find these material expedients unsatisfactory, and they receive no help from them, these very failures may open their blind eyes."ibid., pp. 443-444;

The Apostle Paul summed up the spiritual method of healing in these words: "Now the Lord is that Spirit: and where the Spirit of the Lord is, there is liberty. But we all, with open face beholding as in a glass the glory of the Lord, are changed into the same image from glory to glory, even as by the Spirit of the Lord."II Cor. 3:17, 18. Can we recognize our spiritual identity and find our liberty by beholding matter or indulging in material thinking?

Do we really have a choice? 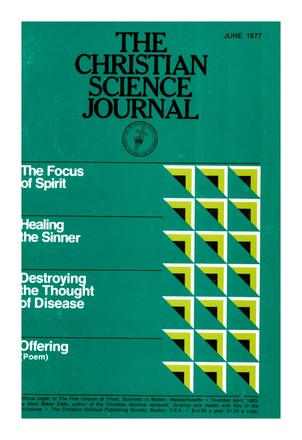 The Manual: Staff and Rod

The Focus of Spirit

Destroying the Thought of Disease

I Am Not Guilty!

Supply Is Built In

By the Sunday School Division, Department of Branches and Practitioners | June 1977