There is immense wisdom in the old proverb, "He that is slow to anger is better than the mighty." Hannah More said, "If I wished to punish an enemy I should make him hate somebody." To punish ourselves for others' faults is superlative folly. The arrow shot from another's bow is practically harmless unless our thought barbs it. It is our pride that makes another's criticism rankle, our self-will that makes another's deed offensive, our egotism that is hurt by another's self-assertion. Well may we be offended at faults of our own, but we can hardly afford to be miserable for the faults of others. A courtier told Constantine that the mob had broken the head off his statue with stones. The Emperor lifted his hands to his head, saying: "It is very surprising, but I don't feel hurt in the least." We should remember that the world is wide; and that there are a thousand million different human wills, opinions, ambitions, tastes and loves; that each person has a different history, constitution, culture, character, from all the rest; that human life is the work, the play, the ceaseless action and reaction upon each other of these different living atoms. We should go forth into life with the smallest expectations, but with the largest patience; with a keen relish for, and appreciation of, everything beautiful, great and good; but with a temper so genial that the friction of the world shall not wear upon our sensibilities, an equanimity so settled that no passing breath nor accidental disturbance shall agitate or ruffle it, and with a charity broad enough to cover the whole world's evil, and sweet enough to neutralize what is bitter in it, determined not to be offended when no offence is meant; nor even then, unless the offence be worth noticing. Nothing short of malicious injury, or flattery, should offend us. He who can wilfully injure another is an object of pity rather than of resentment, and it is a question whether there is enough of a flatterer for a whole-souled woman to be offended with. 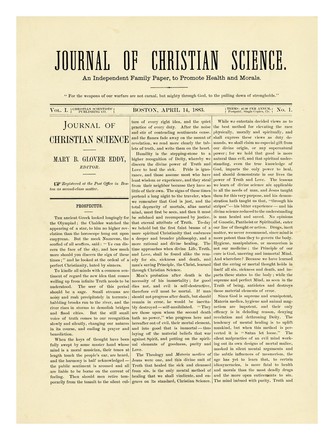 A CASE OF FAITH CURE

He that never doubted the existence of...

THE OAK ON THE SUMMIT

TOO MUCH WILL POWER

We are ready to meet the profound...

with contributions from Emerson | April 1883