The closeness between parents and small children can be very special, something both will always cherish. This bond also hints at the tender closeness our Parent, God, has with each of us. And staying close to God's love ourselves lets us feel that closeness with our children wherever they might be.

In Science and Health Mary Baker Eddy explores the relationship of God and His children. For instance, she writes: "The scientific unity which exists between God and man must be wrought out in life-practice, and God's will must be universally done." Science and Health, p. 202. We have always been related to God, as His spiritual creation. Because God is our source, parents and children have in common His spiritual qualities, such as love and understanding. These qualities belong to each of us, but they need to be "wrought out in life-practice"—in respect for each other, unselfishness, cheerfulness.

I learned a lesson about living my closeness to God from one of my children some years ago. To me, this experience illustrated the spirit of a verse in the book of Proverbs: "There is a friend that sticketh closer than a brother." Prov. 18:24

I was expecting a baby in about two months' time, and we also had two other children. One of them was just beginning to walk and constantly needed reassurance, calling out to me when he tumbled over saying "more pickups." Lifting him up was difficult and so was getting down on the floor with him. Soon, however, he solved the problem himself by bringing his toys and setling himself down at my feet, sticking close like a little shadow. Wherever I went in the house, there he would be at my feet, keeping close. I saw that, like that little child settled at my feet, I needed to draw near to God as my spiritual base in life. Regardless of what was going on around me, I was safe in sticking close to God in my thoughts and actions.

God is the All we need, especially when our need seems very great. He is near right now and eternally, and the unity we have with Him has always existed. Not one of us is left out of His complete care.

Jesus had a special place for children in his heart.

One summer, years later, one of our boys took a summer job in France. After completing his contract with the firm, he decided to see something of Paris before coming home. He had taken a tent with him, and one night, after pitching it and going inside, he was attacked by some youths. The thought came to him very strongly not to attempt to go outside, so he remained zipped up inside his tent, staying as calm as he could. There was a lot of shouting and threats, but he maintained a hold on the zipper of the tent to prevent anyone from entering. When everything got quiet, he waited a while before packing up his tent and belongings. Then he telephoned us to tell us about the incident and to say he was unharmed and on his way home. I was so relieved that he had listened to and acted on the idea that came to him. I was glad, too, that those youths had been prevented from committing any crime.

When this son had first gone abroad, each evening before going to sleep, I took this line from Hymn 283 in the Christian Science Hymnal as a prayer for him: "Daily He campeth about us, protecting and guiding." Our daughter, who lives some distance from us, told us that she woke up in the early hours of that night he was camping, with the thought that she needed to pray for her brother. She said she knew that "he was inside the encircling arms of Love."

These experiences prove so clearly to me that God keeps each of us safe, telling us what to do (or what not to do), each moment, day or night. We are the children of His complete care. Not one of us in outside His parenting and protection. In a sense, God is the One "who sticketh closer than a brother." 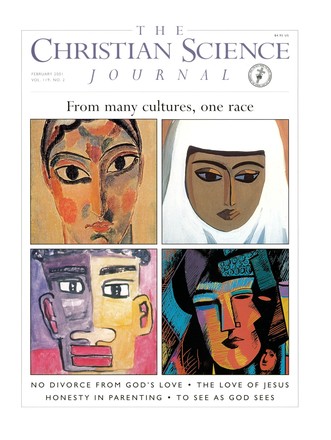 From many cultures, ONE RACE

To see as God sees

No Divorce from God's love

Are you a parent?

What are we praying for?

Without knowing the details

The love of Jesus