In this article a Trustee of the Publishing Society, a Monitor staffer, and a former Clerk of The Mother Church discuss the Monitor. Their comments emphasize how the Monitor is a timely response to the world's great need for daily perspectives on the human scene, and how it remains an integral part of Mrs. Eddy's vision and demonstration of Church.

"Dedicated mental environmentalists." This was C. Earle Armstrong's description of Christian Scientists "who use the Monitor to keep thought free of the pollutants of world belief and full of the pure, sustaining truths of God's ever-present goodness and allness."

Mr. Armstrong, a Trustee of the Publishing Society, depicted the Monitor as "a mental decontaminator,' while Corinne LaBarre, former Clerk of The Mother Church, said the Monitor's role is "to antidote, to invigorate, and to sustain. It is one of God's ideas fulfilling the prophetic destiny of Christian Science to bring salvation to all mankind."

The Monitor was also likened to a marvelous tool that Mrs. Eddy has given Christian Scientists to help them obey our Master's charge: "Go ye into all the world, and preach the gospel to every creature."Mark 16:15; Miss LaBarre then asked: "Was it not the same Christ speaking through our Leader's words to her followers about the role of the Monitor 'to spread undivided the Science that operates unspent'?" The First Church of Christ, Scientist, and Miscellany, p. 353.

Charlotte Saikowski, chief editorial writer, noted how many newspapers published in Mrs. Eddy's time were dominated by violence, scandal, and sensationalism. She observed that these papers not only played up the tawdry aspects of life, but they failed to deal purposefully with the important events taking place in that early part of the twentieth century. Miss Saikowski went on to explain: "They were not a vehicle for educating and enlightening but for amusing and entertaining. And what of our times 70 years later?

"There are, of course, many fine newspapers today with a sense of social responsibility in reporting events. But two broad developments should make us appreciate how much a periodical of our own is essential. One is the chemicalization taking place in human affairs. Because of the assertion of the Christ, Truth, the forces of evil are stirring as never before—coming out into the open to be seen and dealt with. Our Leader prophesied the stir that would come with the advent of Christian Science. Secondly, because of the enormous technological progress in communications, the capacity for exploiting the worst motives and feelings has greatly increased. Think of the books today that tout cheap sex, and television that, for all its marvelous benefits, loads the air with violence and sensualism. Think of the films that magnify disaster and destruction almost to the point of desensitizing the viewer. And think of all the attention the media today give to the analysis of disease, to medical theories, and to the wants of the body."

This writer also pointed out that there is another kind of mental miasma—the confusion and uncertainty that come with so much turbulence in the world, with problems that appear so complex, and with solutions that seem so unclear. "Mankind," Miss Saikowski said, "confronts such basic economic challenges as poverty, inflation, budget deficits, trade imbalances. It has to deal with the intricacies of trying to curb the arms race and develop new sources of energy, not to mention such political problems as finding peace in the Middle East and in Rhodesia.

"And what would seem to be a natural response to these difficult issues?" she asked. "Don't you sometimes feel as though you'd like to turn your back on this array of bewildering problems and the conflicting, mortal opinions they invite?"

Answering her own question, the chief editorial writer replied: "The Monitor won't allow us to retire into a smug, complacent world of our own. It is an educational instrument that would keep Christian Scientists looking outward, that would help clarify these complex issues and rouse Christians to pray for the healing of the world. Surely that purpose is more vital today than ever."

"The way the individual contributes to this healing is through his or her own Christliness," Mr. Armstrong explained. Then he added: "It's the Monitor's Christliness that moves the mountain of human thought, redeems it from fear and worship of evil to the contemplation and acceptance of good.

"The Christ finds expression through the columns of the Monitor in dispatches not doomful but hopeful; in reports not prejudiced but balanced; in writing not sensationalized but compassionately factual; in columns not self-serving but Christian.

"Through a great love for their fellowman and through their Christian concern for the well-being and redemption of mankind, Monitor writers and editors bring their own spiritual knowing to bear on every world situation, realizing that behind every material picture is the spiritual counter fact. As they gain this true view of individuals and events, they write and edit with compassion, and the reader feels that enlivening Christian warmth.

"The Monitor provides one of the sharpest and most compassionate cutting edges of worldwide redemption entering public thought today. We can all help through prayer. Only through persistent, daily, demonstrated prayer will the Christly mission of the Monitor be seen and acknowledged."

The Monitor played the lead role at this meeting

It was a dramatic presentation. Literally. When the members of a branch church in India were looking for a way to illustrate the Monitor's importance, they decided to read a selection of articles from the weekly international edition. The readings were linked together by a brief but appropriate commentary.

The results? Members were not only delighted and much more enthusiastic in their support of the paper, but the position of advertising representative, previously vacant, was filled. And 17 new subscriptions, including some from business firms and social institutions, were taken out.

Questions and answers about the Monitor

What is the unique, spiritual approach Monitor writers and editors bring to what they report and write?

The method of antidoting individual or world difficulties is called "problem solving journalism" by Monitor staffers. As one editor explained, "That doesn't mean Monitor writers or editors will solve your problems. But by prayerful and diligent research they seek out the best thinking being done on issues big and small. Then all the 'readers'—and that includes some 15 million who see Monitor articles syndicated in other newspapers and more millions who hear them on radio—can do what they are able to apply solutions. In some cases that may be metaphysical support. In others it may be human action. Frequently it is both."

Whether Monitor writers are working on a single article or a major series, they seek not only to accurately define problems, but to point the way toward potential solutions.

Three Monitor series are examples of this approach. One dealt with precise ways in which the U.S. federal bureaucracy really could be trimmed— saving taxpayers' money and also improving, not harming, what the government does. A second series on what's right with U.S. schools noted some education ideas that really do work and could be adopted by many American schools. And finally, there was a series on helping older Americans find jobs. It gave some very specific advice.

Occasionally I feel very annoyed with some of the things I read, and often these are not issues I have strong personal feelings about. Why do I feel this way?

The irritation may be one aspect of the aggravation in world thought. It may be part of a trap to make you forget to use the Monitor as a tool for prayer.

On pages 248-249 of Miscellany, Mrs. Eddy has a message to lecturers. It can apply as well to others who work for the Cause of Christian Science, including Monitor staff members and those who support the paper. "You may condemn evil in the abstract," she writes, "without harming any one or your own moral sense, but condemn persons seldom, if ever." Further on she counsels her readers, "Meet dispassionately the raging element of individual hate and counteract its most gigantic falsities. . . . Unless withstood, the heat of hate burns the wheat, spares the tares, and sends forth a mental miasma fatal to health, happiness, and the morals of mankind. . . ."

Through its problem-solving approach, the Monitor tries to help its readers cut through such miasmas in today's world.

Is it true that the tabloid size has affected the Monitor's prestige?

Absolutely not. Reader mail has been overwhelmingly supportive of the change. National surveys in the U.S. have confirmed these findings. Many readers speak approvingly of the "ease of handling" the new format. While many in the newspaper profession initially watched to see whether a "quality" newspaper could be successfully produced in tabloid format, the reaction has been warm and congratulatory.

A recent survey, conducted in Washington, D.C., by independent researchers, rated on a scale of one to four the top 25 news media—both publications and radio/television. Of the 25 the Monitor placed second for fair and accurate reporting. It's interesting to note that the change in size has been adopted by a number of papers and is being explored by others.

What are the specific standards used to screen advertising?

There is a distinction between endorsement and standards. An advertisement in the Monitor does not imply endorsement by the Monitor. There are the obvious omissions—drugs, alcohol, tobacco, health products.

A close look is given to mail-order offerings, investment fund solicitations, and schools—partly because most of these represent a long-term commitment for the reader. We want to confirm that these are financially solid. We'll check credit, but again it does not mean they are completely risk free. There are some gray areas—books, movies. So much is a matter of taste that while we can set standards and try to meet those standards, a reader may or may not agree with the approach of a particular ad.

The Monitor does not tell its readers how to think or what to buy. It leaves the reader free to think for himself and to agree or disagree as the reader sees fit.

What is seen to be the Monitor's place in a world of rapidly changing communication technology and a world that needs better, more probing analysis of thought?

There are basically two trends in the world that are rushing into conflict. Both offer tremendous opportunity to the Monitor. The first is the increasing complexity and almost physical diminution of the human sphere. We are in much closer contact with other people—so there's a lot more to write about. At the same time there seems to be much less time. Many people get their information from a short news story on TV or radio. That satisfies some, but it doesn't satisfy many. The Monitor has an opportunity to fill this gap of "why?" and "how?"—from the most pedestrian level to world affairs.

And this opportunity can be fulfilled through the prayerful support of Christian Scientists. 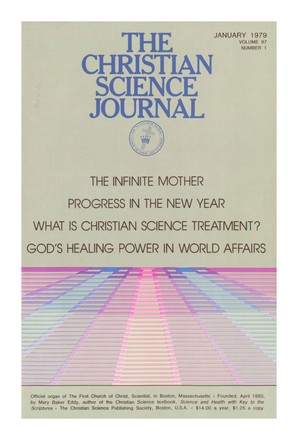 The care and feeding of giant systems

What is Christian Science treatment?

Live the fullness of God's reality!

They elected me to read at the college organization?

What is healed? What is demonstrated?

The Sermon on the Mount—now!

Our periodicals: a vital healing force