Alessandra Colombini is a Christian Science practitioner in São Paulo, Brazil. She talked with the Journal about ways that expectant parents might begin to prepare for childbirth.

What are some of the ideas or spiritual insights that you share with expectant parents?

First of all, I point out that men and women are not creators. I ask parents to read and study Science and Health. I tell them that the first chapter of Genesis in the Bible tells them about their child. That chapter says that God created us in His own image and likeness.

It's helpful to think about the preexistence of this child. God is the only creator, so that means, spiritually speaking, that the child has always existed. When we are conscious of the reign of God, or Spirit, and His government, then, for all practical purposes, we are in "heaven." Heaven is not actually a place. It is an awareness of God and His goodness.

This understanding can help a woman in labor, because her state of thought is so important. If she is nervous or afraid, her experience in giving birth can become more difficult. When she's aware of the presence of God, and of the spiritual nature of herself and her child, the process can be so much easier.

When I gave birth to my second child, I could feel movement, but no pain. The labor progressed without pain, because I was aware of the truth of spiritual creation. I was not afraid. My mental state—my awareness of God's presence—made the difference.

Prayer needs to be an integral part of the preparation for birth. It's also helpful to pray throughout the pregnancy, not just right before the delivery or during it. When we pray, we become aware of the presence of a higher power, and that higher power is all good. Everything that God does is good, and everything that is related to creation is good, and only good. God never uses evil to make good happen, so it's logical to reason that if pain is an evil, God isn't behind it.

An expectant mother, who was considered a little too old to have children, once asked me to pray with her. The doctor had predicted that the pregnancy and birth would be difficult and that she'd need a Caesarean section. During the pregnancy, she was healed of anemia, circulation problems, and other complications, through consecrated prayer. Throughout the pregnancy, she was confident and not afraid.

During the delivery, the doctor said the child was in a breech position, and again recommended a Caesarean section. The mother asked for some time to think about it. During this time, her husband called me for spiritual help. I thought of this statement from Science and Health: "The great truth in the Science of being, that the real man was, is, and ever shall be perfect, is incontrovertible; for if man is the image, reflection, of God, he is neither inverted nor subverted, but upright and Godlike." Science and Health, p. 200. I also prayed with a verse from the Psalms in the Portuguese Bible, which translated directly into English says, "God will bring it to a good end." Ps. 138:8. I conveyed this to the expectant father, and he shared it with his wife. She accepted this idea completely. When the nurse came in to check on the mother, she was astonished to see that the birth was proceeding. The baby boy was coming out easily, even though still in a breech position, so there was no need for an operation. The woman was rushed to the delivery room, where the baby was born normally and quickly.

What specific conditions in your country must you consider when praying with a patient?

Here in Brazil, birthing is considered pretty much a medical event. Brazil has the highest rate of Caesarean sections in the world. The Detroit Free Press reported in 1998 that "more than 36 percent of births [in Brazil] are C-sections, or cesareans, making Brazil the world leader in the surgery. In some private hospitals, the rate climbs as high as 85 percent. The United States, with 21 percent of births by C-section, is the only country that comes close to Brazil's rate." [From "Brazil goes natural: High cesarean birth rate leads doctors, activists to urge old-fashioned way," March 18. ] If the labor and birth don't take place quickly, the doctors may do a C-section. I tell my patients not to argue with the medical personnel, because it doesn't produce a good result. The doctors are very sure that surgery is the most practical way. There is a lot of this kind of thinking in our society and culture.

I tell my patients to let universal Mind take charge, and then the outcome will be just right. I tell the expectant mother, "You don't need to feel guilty, or responsible for the method of delivery." The conscious awareness that God, or good, is in control calms down any feeling of having to struggle for a certain outcome. And it helps the parents become more calm and confident. 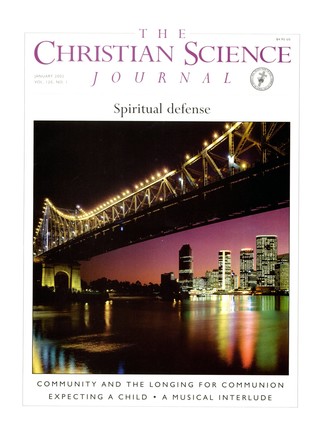 The quiet role of Joseph

Spirituality THE WEAPON THAT NEVER FAILS

The bridge to home

Destroying tyranny, one day at a time

The choices we make

God is right here with you and me

The gift of baptism

A lifetime of healings

Community and the longing for communion

'We found a Bible in an old trunk'

'Sympathetic vibrations' The Bible and Science and Health

'Listen to the perfect voice!'

Healing helped her take a turn with her talent

By Brodie Marples with contributions from Sandra Marples | January 2002