Science often explains things that would otherwise seem inexplicable to the onlooker. For example, it may look as if there is nothing to support the weight of a plane as it lifts off. But through an understanding of the scientific laws of aerodynamics, engineers have been able to construct a 220,000-pound aircraft that can be lifted by the seemingly invisible pressure force of air, and all pilots are now taught these scientific principles of flight.

In like manner, we can see the effect of God’s restorative power through Christian Science healings, even if our material senses cannot discern the cause. We can, through spiritual sense, learn to understand and practice the scientific Principle and laws of healing.

A Christian healing one might witness or read about may seem miraculous on the surface. When Paul instantaneously healed a man who had been lame from birth, those who saw the healing exclaimed: “The gods are come down to us in the likeness of men” (Acts 14:11). However, Christ Jesus taught his followers that the healings he and they performed were not the result of personal ability or an exclusive behest from God; they had divine Principle behind them, which is God. Jesus said: “I tell you the truth …, whoever believes in me will do the same things that I do. Those who believe will do even greater things than these, because I am going to the Father” (John 14:12, Expanded Bible).

When confronted with illness, my family has repeatedly gone to God in prayer, looking to our Father as the divine Principle that is Truth and Love for healing. One morning in March of 2016 my husband experienced an acute pain in his abdomen. Because of the severity of the pain, he asked me to phone a practitioner who could aid us through Christian Science treatment.

The practitioner’s words of assurance that God’s love was an immediate aid calmed our fears. My husband clung to Jesus’ promise that the kingdom of heaven was within him (see Luke 17:21). I also prayed to better understand the Bible’s statement that flesh and blood are no part of God’s kingdom (see I Corinthians 15:50). As Spirit, God created all of us spiritually, not materially. As divine Love, God could not create us to sin, suffer, and die.

Several months previously, a Christian Science treatment had freed me quickly and permanently from a debilitating hip pain. While being treated through a practitioner’s prayerful understanding of God, I had clearly seen that perfect Love forever maintained my health in painless being. If pain was something that could come and go, then it had no basis in eternal Truth, the unchanging reality of our spiritual being. This lesson was a strength to my own prayers in dealing with my husband’s situation.

Later that afternoon while he was walking between rooms, in the space of three steps, the piercing pain my husband had been experiencing completely left and never returned.

The decision to rely on Christian Science was based on our lifetime experience of seeing the proof of this scientific system of mental healing—healing based on the infallible laws of divine Love. It involves a total reliance on God, Spirit, as the only healer.

As an aerospace engineering professor, I have no fear upon boarding an airplane that the laws of aerodynamics—the application of which results in reliable flight—will suddenly stop working. Similarly, as a Christian Scientist, I understand that God’s law—the law of perfect Love—is completely dependable and always in operation; it needs only to be properly understood and adhered to when seeking healing. Each metaphysical healing is brought about by an understanding of our inherent spiritual dominion. Like any science, the better we understand it, the more capable we are at solving problems.

In the space of three steps, the piercing pain my husband had been experiencing completely left and never returned.

The verse, from which Jesus’ words to his disciples were quoted earlier, continues, “They will do greater things because all believers—not just Jesus—will have the Holy Spirit living in them and empowering them” (EXB, John 14:12). What is the Holy Spirit? And why did Christians stop healing within a few centuries after Jesus left?

It was as if Christianity were an airplane with a pilot who had been incorrectly taught to believe “Long ago this airplane could fly, but now it can’t.” Certainly God is still at work today, but much of what is understood about the practicality of God’s care is limited because of unenlightenment about the power of the Holy Spirit in us to heal. Yet, the Holy Spirit—God’s healing Science, which Jesus thoroughly proved—is timeless.

Jesus foretold the “night” of lost understanding approaching when healing a man born blind from birth. He said: “While it is daytime, we must continue doing the work of the One who sent me. Night is coming …, when no one can work” (John 9:4, EXB). But he also prophesied the eventual revival of the understanding and practice of divine power through the coming of the Comforter, or the Holy Spirit. He said this “Spirit of truth” would teach all things and testify of him—repeating his healing works (see John, chaps. 14—15).

Earlier he told his followers he had more to say, but that it was too much for them to hear at that time. When Jesus preached: “It is the Spirit that gives life. The flesh doesn’t give life,” he added, “But some of you don’t believe” (John 6:63, 64, EXB). The Bible records that many of his followers left him after this saying. Was it because they were not ready to accept the deep truths, or divine Science, of our spiritual existence?

At the bidding of wisdom, Jesus left the comprehensive scientific explanation of his mighty works, even the assertion that all reality is only in Spirit, for the coming of the Comforter: Christian Science. Jesus knew the Comforter would be met with as much denial and hatred as he had received in this world.

He must have known that thought needed to be prepared for the coming of the Comforter so that its discovery could be protected. It wasn’t until the 19th century in the United States—during a period of tremendous movement in science, human rights, and religious freedom and reform—that Christian Science was discovered.

Mary Baker Eddy, a native of New England, discovered this scientific healing power of the Christ in 1866, and made it available for humanity in 1875 with the publication of Science and Health with Key to the Scriptures. The “falling apple” (Mary Baker Eddy, Retrospection and Introspection, p. 24) that enabled her to make this discovery, after turning to her Bible, was her immediate recovery from paralysis and severe internal injuries caused by an accident (see Yvonne Caché von Fettweis and Robert Townsend Warneck, Mary Baker Eddy: Christian Healer, Amplified Edition, pp. 56–59).

She later wrote: “The Bible was my textbook. It answered my questions as to how I was healed; but the Scriptures had to me a new meaning, a new tongue. Their spiritual signification appeared; and I apprehended for the first time, in their spiritual meaning, Jesus’ teaching and demonstration, and the Principle and rule of spiritual Science and metaphysical healing,—in a word, Christian Science” (Retrospection and Introspection, p. 25).

The trinity, “God the Father-Mother; Christ the spiritual idea of sonship; divine Science or the Holy Comforter” (Science and Health, p. 331), delineates the revelation of God’s Word to humanity. The Old Testament revealed for all time God as the creator, even Father and protector, of us all. The New Testament continued this revelation through the life of Christ Jesus as the Son of God. The textbook of Christian Science, Science and Health, completed this revelation to awaken our understanding of the Holy Spirit.

Science and Health explains that not only was Jesus’ culminating demonstration, through his resurrection, an act of pure love for the salvation of mankind, but it was scientific proof that our life is not material; it is forever in Spirit. It was through this revelation of life being wholly spiritual that Mary Baker Eddy and her students were able to heal thousands of people. With scientific proof of her discovery, she understood that miracles were not mysterious or a violation of law; she defined miracle as “that which is divinely natural, but must be learned humanly; a phenomenon of Science” (Science and Health, p. 591).

Seeing healing as a fulfillment of God’s law—deposing the concept that we are governed by laws of matter, which were never ordained by God—she wrote: “The supposed laws which result in weariness and disease are not His laws, for the legitimate and only possible action of Truth is the production of harmony. Laws of nature are laws of Spirit; but mortals commonly recognize as law that which hides the power of Spirit” (Science and Health, p. 183). The laws, or more accurately, the lies, of matter include disease, death, and decay, and these have no power over God’s spiritual creation.

This revelation brought to light an expanded understanding of the meaning of Jesus’ life and his remarkable works, including walking on water and feeding thousands with just a small amount of bread and fish. Mrs. Eddy considered Jesus the most scientific man to ever walk the earth (see Science and Health, p. 313). An integral part of his mission was to prove man’s oneness with God, which gives man dominion through the power of Spirit, scientifically demonstrating matter to be insubstantial and therefore incapable of dominating us with false claims of discord, lack, disease, and death.

Have you ever looked up in awe at a Boeing 737 flying through the air? Just gaining a glimpse of God’s Science is even more awe-inspiring, as it makes what seems impossible suddenly understandable and achievable. Good is never miraculous. Jesus clearly stated that the scientific application of ever-present Truth brings healing when he said, “You will know the truth, and the truth will make … you free” (John 8:32, EXB). Knowing the truth with singleness of heart enables us to obey Jesus’ command to follow him in the way of scientific salvation that includes being Christian healers.

By imbibing the spirit of the divine Principle behind Christ Jesus’ life and works, we can learn to heal as he taught. We can understand that Love is ready, in fact omnipotently able, to alleviate suffering through the dominion of Christ. Each healing—whether it is physical, financial, or otherwise—establishes step by step, “line upon line” (Isaiah 28:13), the reign of Christ and the kingdom of heaven on earth. With our Father, divine Principle, governing all, our prayers to prove this can accomplish seemingly impossible healing through scientific demonstration. 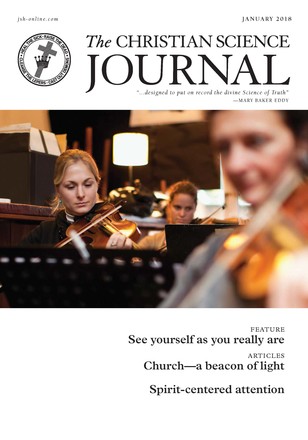 See yourself as you really are

The power of the First Commandment

The promise of the seed

Freedom from back pain

Significant weight loss and other healings

A healing lecture in India

My healing of an eating disorder