Whatever man sees, feels, or takes cognizance of, must be caught through mind, insomuch as perception, sensation and consciousness belong to mind and not to matter. Floating with the popular current of mortal thought, without questioning the reliability of its conclusions, we do what others do, believe what others believe, and say what others say. Common consent is the only contagion that can make disease catching.

People believe that certain diseases are contagious, and that any one is liable to have them under certain circumstances. This mental state predisposes one to take that disease, when the circumstances appear that he believes cause such a result. If he believed as sincerely that health is catching when exposed to contact with healthy people, he would catch their state of feeling quite as surely, and with better effect than the sick man's. If only the people would believe that good is more contagious than evil, how much less would be the clergy's labor to convert sinners. And if only the pulpit would encourage faith in mind governing the receptivity of the body over all other influences, and would teach man as David taught, "Thou shalt not be afraid for the terror by night, nor for the pestilence that walketh in darkness; nor for the destruction that wasteth at noonday,"— the faith of mankind in contagious disease would become beautifully less, and in that same proportion would their faith increase in the power of God, good, to ward off all evil, until the whole human race should become healthier, happier and more christian. A humane, hopeful, calm state of mind is the better preventative of contagion than a drug or any possible hygienic method, and the "perfect love" that "casteth out fear" is a certain defence against disease of every kind. 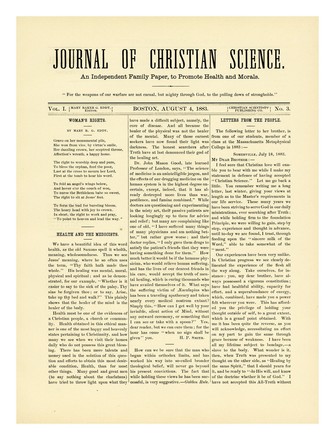 LETTERS FROM THE PEOPLE

By Editor with contributions from M.W.M. | August 1883

SHOW ME THE WAY

A WORD TO THE WISE

We clip from "The Journal of Education's"...

Some men neglect, if they do not wholly...

HE WHO RUNS CAN READ

"THOU GOD SEEST ME"

NOT DEATH, BUT LIFE

with contributions from Sydney Smith | August 1883