On looking back over the twenty-five years during which I have been a member of the Congregational Church, I can see how I was being made ready to accept Christian Science when it should come to me.

Hot-tempered and impulsive, timid and sensitive, yet earnest and conscientious, my whole life has been one of hard struggle with the seemingly warring elements within me.

When falsely accused and misjudged by one very dear to me, and for whom I had done much, I was very angry, and remember saying in reply to her statement that God told her to tell me what she had, “Then if that is the kind of a God you have, I hate him.” I silently vowed then and there that I never would consider myself a Christian again until I found some conception of God different from that which could hold Him as teaching a lie.

I gradually grew more hardened, until I shunned the regular communion service of the church. All the time my church work was kept up, and I honestly struggled to forgive as I would be forgiven, and get back to my old child-like trust. But I could no longer be satisfied to believe, I must know.

I could not see that Christians were any happier than people of the world. My neighbors were nearly all ailing and talking of their nerves. I had striven all my life, with tears and agonized pleadings, to be delivered from the bondage of a passionate temper, which was so unlike the blessed Master whose life I desired to follow. Where was the God to whom we all prayed? Was His arm shortened that He could not save?

Only once had I heard of Christian Science, and that was in the early eighties, when making a trip to Boston on the steamer Gate City of the Savannah line. There being no orthodox minister on board, a very intelligent-looking man in the prime of life, was given the opportunity of speaking to the passengers on the subject of Christian Science. It appealed to me strongly even then, but I was too timid to ask questions, so gradually forgot all that I had heard.

While calling on a friend in St. Augustine whom I had known as an invalid, some reference was made to her present good health. The next day I went back to her home, and inquired if she had been sending out any special thoughts after me, for this passage of Scripture had been ringing in my ears ever since I had been there on the previous day, “O send out thy light and thy truth: let them lead me.” She related the story of her healing, gave me “Unity of Good” by Mary Baker G. Eddy, a Journal, and some tracts. She also asked me to try to get “Science and Health with Key to the Scriptures” from our public library, if it was there, and read it. I could obtain very little light from what my friend had given me to read, so inquired at the library for Science and Health. To my surprise it was there, presented, so the librarian told me, by a Scientist from Cleveland, Ohio.

I read, and read, but still it was all like Greek to me. Determined to keep my promise faithfully, however, I persevered, and when about half way through was rewarded by glimpses of the Light.

After this first glimpse, as I told the Congregational pastor when he called to labor with the sheep who, in his estimation, had gone astray, “The light came to me in rapid flashes, one after the other. If it had all come at once I should have been struck down like Saul of Tarsus.” “Why,” he said, “it was just like a conversion, wasn’t it?” I replied, “It was a conversion.”

Before finishing Science and Health, my first opportunity came to put its teachings into practice. My little boy arose one morning so hoarse that he could not speak aloud. My first thought was one of fear, “Oh, dear! that child is going to have the croup again to-night.” Then followed the thought, “Now is your time to test the Truth.” Not knowing anything about treating, I tried to destroy my own sense of fear, and realize that he was God’s child and could be in no condition that God did not create. Then I went down to breakfast and forgot all about it. At the breakfast table, I suddenly became conscious that Roy was talking in his natural tone of voice, without a trace of croup or hoarseness. The wave of unutterable joy and peace that swept over me then, no one but a Scientist can realize.

The next time I had occasion to help him out of the same claim, all symptoms disappeared within five minutes.

For the next two weeks I went about as one struck dumb. I could not talk error, and did not know enough to talk Truth. Temper had vanished into nothingness. What was there left at which to get angry when God is Love and God is All.

Several days after finishing the “little book” I discovered that my right ear, which had discharged for nineteen years, was completely healed. Many other troubles vanished at the same time.

My husband, noticing the great change in me, began to investigate, and now he, too, is rejoicing in the Truth which makes free, and my little boy is doing good work for himself.

Without knowing what Scientists usually did, or what kind of people they were, intelligent or otherwise, I withdrew from the Congregational Church. This necessarily caused some commotion, as for years I had been prominent in all work connected with the church, and an intimate friend of the pastor’s family. Nothing cost me so great a pang in this giving up of old ties as to part with my dear children in the Junior Christian Endeavor and Sunday School. How gladly would I have taught them of the Christian Science God, who is Love, and can be demonstrated.

My friends have mourned over me, and one dear lady begged me to be careful, as she had known of insanity resulting from taking up with Christian Science, and was greatly grieved because I took her warning so lightly.

One day, after meeting with more than my usual share of averted faces and cold greetings from those who had been my warmest friends, I thought of our blessed Master; how he had been continually misrepresented and misjudged—deserted even—by those who knew him best, and I thought, “Enough for the disciple that he be as his Master.” Then in a flash it was revealed to me what our Leader must have endured for the sake of giving this Truth to us and all mankind. My heart went out to her in one great cry of “Mother,” and may I prove worthy to call her such.

This is not hero-worship, but the outpouring of grateful hearts to her who has toiled and sacrificed for the benefit of mankind. Those who do not recognize the benefit cannot be expected to understand the feeling which all true Scientists have for their Leader.

Although we have only been in Science since November, 1898, we already have had many good demonstrations in our own family, and have been enabled to help some others. When my first case of impersonal healing came to my knowledge, I was awed to think I had unconsciously reflected so much Truth and Love, never having heard that such cases occurred in Christian Science. Whenever any one is helped through my slight understanding, my heart sings, “Glory be to God and peace to the struggling hearts!” (Science and Health, page 350).

I would like to mention one demonstration, as it is different from any I have seen. A tendency to nightmare runs in my family, and I had suffered with it all my life, whether I ate or fasted. My husband often has found it difficult to shake me out of it. One night, soon after coming into Science, this old claim took possession of me. As I felt its horrid clutches the thought came as distinctly as though a voice had uttered the words, “God is All-in-all.” Instantly, I was wide awake. Only once since has it tried to return, then in the same way came the thought, “God is the only power.” This entirely destroyed the claim, thus verifying our Leader’s words in “Retrospection and Introspection,” page 74, “If you fall asleep, actually conscious of the Truth of Christian Science,—namely, that man’s harmony is no more to be invaded than the rhythm of the universe,—you cannot awake in fear or suffering of any sort.”

What a blessing to be able to sleep night after night thinking of Proverbs, 3:24, when one has always been a slave to fear,—afraid of fire, afraid of burglars, afraid of sickness, afraid of everything. “Perfect love casteth out fear.” “He that feareth is not made perfect in love.”

There are only four of us here yet, but we hold service every Sunday morning at our home. Last March I had the privilege of class teaching, which has helped to plant my feet more firmly on the Rock, Christ Jesus. 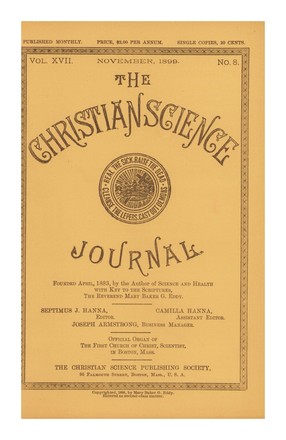 AN EXPRESSION OF LOVE

I call that mind free which masters the senses, which...

THE SCIENCE OF CHRISTIAN SCIENCE

CHRISTIAN SCIENCE IN ITS HISTORICAL RELATIONS

AS TO ADVERSE CRITICISM

THE BOARD OF EDUCATION

WHERE SHALL TRUE STRENGTH BE FOUND?

The leadings of Truth

A WORD FOR THE MANUAL

THE DECALOGUE AND SERMON ON THE MOUNT