In September Of 1991 I was ill with what appeared to be pneumonia. Over the course of three weeks my breathing became extremely labored and nights were particularly difficult. But I had a deep conviction that turning to God through prayer for healing would be the most thorough and effective form of treatment for me. I was certain that if I could only understand myself to be spiritual here and now, there was nothing that could not be healed quickly and completely through prayer. During this time I was constantly praying for a deeper understanding of my inseparability from God. I enlisted the services of a Christian Science practitioner to pray for and with me as I endeavored to demonstrate more fully God's power to heal.

After a series of progressively difficult nights, my condition dramatically worsened. At this crisis point I called the practitioner and asked her if there was anything that I should specifically be praying about. She commented that the word standard kept coming to her as she prayed. I immediately turned to see what Science and Health with Key to the Scriptures by Mary Baker Eddy had to say on the subject.

One heading in the margin of the book reads, "Christian standard," and just prior to that paragraph I read, "When it is learned that disease cannot destroy life, and that mortals are not saved from sin or sickness by death, this understanding will quicken into newness of life." Then I went on to read in the paragraph adjacent to the heading, "The relinquishment of all faith in death and also of the fear of its sting would raise the standard of health and morals far beyond its present elevation, and would enable us to hold the banner of Christianity aloft with unflinching faith in God, in Life eternal" (p. 426).

I quickly realized that no matter how intimidating the symptoms of disease were, I was not actually suffering from pneumonia. I had been experiencing an objectified fear that life could be in matter and subject to death. As I realized that the substance of my true being was spiritual, existing only in and of Life, God, the symptoms no longer seemed overwhelmingly impenetrable. Disease wasn't a fixed reality to me anymore. I saw clearly that no fear, no false belief of material existence, could interfere with my true, spiritual existence as God's immortal child; neither could it prevent me from exercising my God-given ability to hold the banner of Christianity aloft through the faithful and effective practice of Christianly scientific healing!

This realization was the turning point in the case. I slept well for the first night in weeks and was completely well by morning. There was not even one hour of recuperation required. Physical freedom and activity were immediately and completely restored.

I realized that
the substance of
my true being
was spiritual.

Late one night in the summer of 1996, I ran down a dark hall to answer the ringing telephone. I was unaware that my fully packed suitcase was jutting out in my way. Consequently, I tripped over it and sailed several feet before landing on the floor in another room. It was evident that I had broken a toe. In the face of intense pain I first blamed my husband for placing the bag in the hallway, and then proceeded to condemn myself for running in the dark! But almost immediately, reversing these unloving (and unhealing) thoughts came the Christly recognition that at all times and under every circumstance each of God's children is subject to, influenced by, and protected by divine law alone. I knew that as His child I had the right and ability to defend myself through prayer from the penalties associated with breaking any so-called law of matter.

Science and Health states: "We cannot in reality suffer from breaking anything except a moral or spiritual law. . . . The harmony and immortality of man will never be reached without the understanding that Mind is not in matter. Let us banish sickness as an outlaw, and abide by the rule of perpetual harmony,—God's law. It is man's moral right to annul an unjust sentence, a sentence never inflicted by divine authority" (p. 381).

In prayer I realized that divine Mind, God, the only cause and creator, did not make matter. Its only supposed substance is illusion. I had a choice to make: I could accept the wholly material evidence of an accidental break resulting from carelessness, or I could consciously deny matter as a governing power by realizing that under the universal government of divine Mind, man is the 100 percent intelligent, loving, spiritual expression of harmonious being. Denying the material evidence and accepting the truth of being banished the thoughts of anger, blame, fear, and self-condemnation. I became certain that my husband and I were operating fully within God's law of righteousness, harmony, and health at all times. All pain immediately ceased.

By the next morning, the toe was in its proper position, and with the exception of a bruise, it was functioning normally. The bruise faded quickly, and within a couple of days I wore a pair of three-inch heels to a function that required me to stand for several hours. There was nothing to indicate that I had ever fallen; I stood and walked normally—further evidence that I was completely healed.

One cannot experience genuine spiritual healing without feeling a profound debt of gratitude to Jesus, the great Teacher and demonstrator of pure Christianity, and to Mary Baker Eddy, the Discoverer and Founder of Christian Science. My deepest desire is to live my life in perfect accord with the healing Principle demonstrated in their words and works. This is the only way I know to give evidence of my gratitude for their profound contribution to the benefit of all mankind. 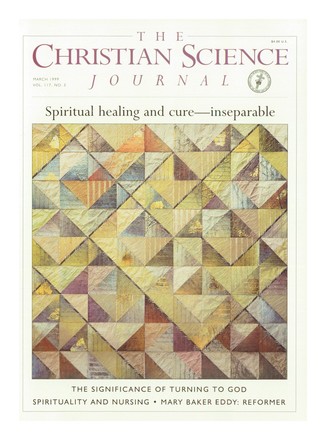 On life and living

"Broadcast to humanity the message of harmony ..."

"How detailed His love is"

Beyond the pebbles, the grand view

One Father, one family

The significance of turning to God

Warnings about the Temple