What fearless joy belongs to expectant parents who realize something of the spiritual preexistence of man! Instead of fretting over such mortal questions as "Will our baby be normal?" they spend the waiting period in grateful, prayerful acknowledgment of the child's eternal perfection as the spiritual image and likeness of his Father-Mother God. The mortal misconception of man as a material germination derived through theories of human conception, genetics, prenatal environment, chance, and so forth, can cause no alarm to parents who understand something of God and His man. They know that in reality a child is not a material germination, beginning, maturing, declining, and dying, but instead an eternal, spiritual emanation of God Himself.

Man coexists with God and expresses His qualities. So what is true of spiritual qualities, such as wisdom, purity, and love, is true of man. The Bible presents divine wisdom as declaring: "Before the mountains were settled, before the hills was I brought forth: ... when he appointed the foundations of the earth: then I was by him, as one brought up with him: and I was daily his delight, rejoicing always before him."  Prov. 8:25, 29, 30.

Man coexisting with God, Spirit, must necessarily preexist the mistaken, inverted, mortal view of conception and birth. Man has always existed with God as His complete spiritual likeness. Thus the illusive, contradictory claims of the birth process are too late to be true. Man was—and is—already one with God. "Before Abraham was, I am,"  John 8:58. explained Christ Jesus.

The realization of divine Truth brings harmony and normality to human experience. Thus the prayer that understands and affirms that God is the only influence on the expected child provides the highest and most effective prenatal care possible.

The advent of the baby Jesus illustrated the highest sense of human birth. In Science and Health Mrs. Eddy explains: "Those instructed in Christian Science have reached the glorious perception that God is the only author of man. The Virgin-mother conceived this idea of God, and gave to her ideal the name of Jesus—that is, Joshua, or Saviour."

And later she adds, "The Christ dwelt forever an idea in the bosom of God, the divine Principle of the man Jesus, and woman perceived this spiritual idea, though at first faintly developed." Science and Health, p. 29.

Leaving behind the false sense of the expected child as conceived in matter and subject to heredity and mishap, the parents grow to see the spiritual sense of multiplication and development as divine unfoldment. To the degree that conception and birth are seen not as material processes that constitute the beginning of a mortal but as the Christly revealing of an eternal, spiritual manifestation of God, to that degree the so-called human consciousness yields to this fact and accepts the child as whole, mature, perfect.

But what about a child or an adult already accepted as having a birth defect? Because man is ever the perfect emanation of divine Spirit, there is no less opportunity at one point in a case than in another simply to turn and accept instead the truth of God and man. We read in Ecclesiastes: "I know that, whatsoever God doeth, it shall be for ever: nothing can be put to it, nor any thing taken from it .... That which hath been is now; and that which is to be hath already been."  Eccl. 3:14, 15.

A mother-to-be, who was a new student of Christian Science, decided to seek the help of a Christian Science practitioner late in the ninth month of her pregnancy. The practitioner agreed to pray for her during the delivery, and shortly thereafter the young woman had a baby girl in a quick and easy birth. The delivery took place in a hospital with the obstetrician in attendance but without use of medication.

At first all seemed well, but the hospital's routine checkup of the newborn child revealed devastating problems. The parents were told first that the baby's face was palsied on one side; then that the child's heart had a substantial hole in it, not having developed properly on one side. The doctor told the parents that even should the child survive long enough to have radical open-heart surgery, she would not grow properly and would likely have other health problems. He sympathetically suggested they go ahead and cry.

Because the medical authorities could offer so little hope, the baby's dad, who at that time knew little of his wife's new religion, agreed to Christian Science treatment. The hospital monitored the baby's progress but gave no medical treatment of any sort. Each day the baby's condition was so dramatically improved that the hospital authorities joyously marveled. And in only four days' time the child was released with the prognosis that the paralysis was healed and the heart defect was "miraculously correcting itself ... just one of those cases seen from time to time that can't be humanly explained!" Today the child is a beautiful, healthy, more than active first-grader.

How did prayer, as taught in Christian Science, effect such a radical turnabout? Not by a hit-or-miss faith cure in which it was believed that God intervened and changed a sick material baby into a well material baby; but instead by the deep, joyful, spiritual realization that her true identity preexisted any distorted material picture. The spiritual understanding that she was already the perfect, eternal emanation of God before the inverted material sense of conception, prenatal influence, and physical birth could be believed to contradict that truth, dissolved the human fear for her well-being. The lie of birth defect was reversed by divine Truth.

There was no "miracle" in the true understanding of the healing. The false, material view of the child was simply exchanged for the spiritual sense of her as divine expression.

A hymn found to be particularly enlightening in this case reads in part:

"Eternal Mind the Potter is,
And thought th' eternal clay:
The hand that fashions is divine,
His works pass not away.
Man is the noblest work of God,
His beauty, power and grace,
Immortal; perfect as his Mind
Reflected face to face.

God could not make imperfect man
His model infinite;
Unhallowed thought He could not
plan,
Love's work and Love must fit.
Life, Truth and Love the pattern
make,
Christ is the perfect heir;
The clouds of sense roll back, and
show
The form divinely fair."  Christian Science Hymnal, No. 51 .

Christian Science healing certainly cannot be described as ignoring the child's problem, as positive thinking, or as waiting for a miracle that may or may not happen. Instead it is Christian healing in its highest sense as taught by the master Christian, Christ Jesus. Of his healing ministry, which he expected to serve as an example to all, Science and Health declares: "Jesus beheld in Science the perfect man, who appeared to him where sinning mortal man appears to mortals. In this perfect man the Saviour saw God's own likeness, and this correct view of man healed the sick."  Science and Health, pp. 476–477.

How wonderful is the understanding that we don't have to accept birth defects either for ourselves or for our children—or for mankind! A Christly view of God and of man in His likeness proves to be both preventive and curative. We can increasingly prove that this utterly consistent method of Christian healing—to which no problem is unhealable—is the precious gift the Christ universally offers earth's children! 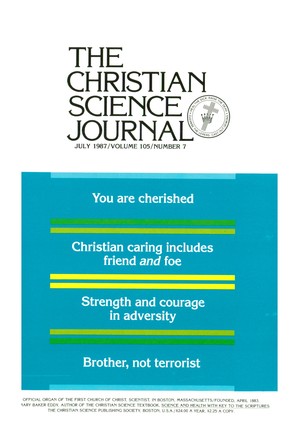 "What we most need"

Be still, my heart

Home: a blessing that is already ours

From time to time we will publish selected articles, editorials, or poems

The presence of God's power

Freedom from the lee shore

The value of moments

By THE CHRISTIAN SCIENCE BOARD OF DIRECTORS | July 1987