The dictionary defines innocence as being free from guilt or sin, being unacquainted with evil. In Christian Science, we learn that innocence is the manifestation of the goodness of God, which is expressed in everything He creates.

God knows nothing of evil; He is infinitely good. The omnipotence of God is the omnipotence of good. The omnipresence of God is the “everywhereness” of that good. The creation story in the first chapter of the Bible confirms, “And God saw every thing that he had made, and, behold, it was very good” (Genesis 1:31). Here is the authority for recognizing, and living, our own innate goodness, our own innocence. As God’s image and likeness, each of us has, in reality, a spiritual nature that is the active expression of His goodness, without any record of or acquaintance with evil (see Genesis 1:27, 28).

The creation record closes by saying, “Thus the heavens and the earth were finished, and all the host of them” (see Genesis 2:1–3). God’s work was completed, requiring nothing further, so the goodness is forever.

There appears to be much that contradicts the Genesis 1 statement of the total goodness and innocence of creation. For example, Bible stories record evil at work, described variously as a serpent or snake, Satan, a liar, the carnal mind—seen in the actions of people. At times the evil may appear to be a blatant, in-your-face, great dragon. But it is often at work unseen and unsuspected, more as a subtle serpent. For example, there’s this account in Genesis: “Dan shall be a serpent by the way, an adder in the path, that biteth the horse heels, so that his rider shall fall backward” (49:17).

Part of Mary Baker Eddy’s definition of Dan in the Glossary of Science and Health with Key to the Scriptures is “error, working out the designs of error” (p. 583). One can imagine the rider referred to in the Bible verse being angry and perhaps beating the horse. But the cause of the problem, the real culprit, isn’t the horse. It’s the serpent. To assume the problem is the horse leaves the serpent undetected and free to continue its surreptitious activity.

Our view of the world and our own experience may likewise seem to verify the presence of evil at work. But in Science and Health we are assured that in reality—in the allness of God and His creation, which expresses Him—there is nothing but good going on. And this allness of good is a law that uncovers and destroys evil. In a discussion in the chapter titled “The Apocalypse,” the serpent activity is exposed and negated. The serpent (evil) is seen as pursuing with hatred the spiritual idea of God, warring against innocence in an effort to destroy it. But, the author writes, “The Revelator lifts the veil from this embodiment of all evil, and beholds its awful character; but he also sees the nothingness of evil and the allness of God” (p. 563).

We can be confident that our own spiritual innocence and goodness cannot be lost.

The all-power of God excludes any possibility of evil, and the recognition of this fact is what destroys evil in our lives. Evil loses its appearance of reality when we listen to God, who is always lovingly assuring us of His presence and power. His ongoing communication to us is a resounding “I am the Lord, and there is none else, there is no God beside me” (Isaiah 45:5).

And so we can be confident that our own spiritual innocence and goodness cannot be lost. They are ours forever, to demonstrate in our thoughts and actions.

Mrs. Eddy corroborates this in a statement in Science and Health where she discusses how what seems evil in our human experience is destroyed. She writes: “Divine Science shows how the Lamb slays the wolf. Innocence and Truth overcome guilt and error” (pp. 567–568). Fear is removed as we recognize who we are and stand up for our purity in our prayers and our daily activity, making divinely inspired choices about what to say and do and believe about ourselves and others.

Daniel’s experience shows this protecting power of goodness. Recall that he was safe in a den of lions. Reflecting on his protection, he said, “My God hath sent his angel, and hath shut the lions’ mouths, that they have not hurt me: forasmuch as before him innocency was found in me” (Daniel 6:22).

Our inherent innocence is a protection for us, as well. Physical problems, emotional disturbance, and so on have nothing to do with the man of God’s creating. Our true, spiritual identity, because it is God’s witness, is pure, unacquainted with evil. It stands intact and safe, untouched by the beliefs in evil that would try to attack that goodness or stop our progress. This mighty spiritual fact is a shield that embraces us and all of our activity, and brings healing.

Living our innocence as best we can is an affirmation of that divine reality. Our active expression of purity, honesty, morality, and so on is required. God’s Christ—His divine message of good, which speaks to our receptive thought—supports this effort.

As we pray for ourselves and others, it is important to defend man’s innocence. Sin, disease, and death may claim to destroy something about man, but such reports are not what they seem to be. The pain, the lack, the alarming physical symptoms may be what is obvious, but the real need in prayer is to get to the root of the problem—that subtle suggestion that man’s goodness, wholeness, and immortal nature could ever be destroyed.

I had an experience that showed me the healing effectiveness of defending man’s innocence. Someone I worked with on a project was uncooperative. I prayed, affirming what I knew to be true about God and how He created man. God being one, there is only one Mind governing all of His creation, and God’s man must be obedient to Him. I knew that harmony, unity of thought and purpose, is a natural expression of that oneness. Soon I was grateful to notice some improvement in the working relationship.

Then, as I continued praying, I saw with great clarity that the real issue wasn’t a troublesome personality that needed correction. Rather, it was the assumption that man could be a mortal, on his own and separated from God, and therefore corruptible. Any serpentine effort of the carnal mind to destroy man’s innate character and keep him from making progress was a lie. The real need was to see that there isn’t a mind or power separate from God and that goodness, in all its forms and actions, cannot be reversed.

Following my prayer, the change in this person’s attitude was remarkable. Our time together became productive, and we developed a harmonious relationship.

Since this experience, my prayers have become stronger and clearer in negating, with spiritual reasoning, any serpentlike activity and affirming that man’s goodness is ours forever in the allness and ever-presence of our mighty God. 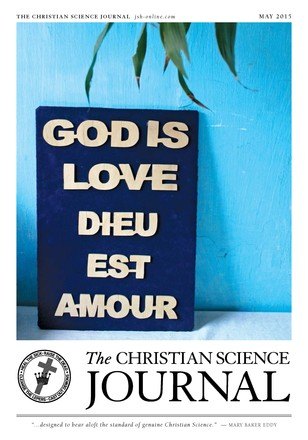 Kevin Graunke interviewed by the Journal’s Rita Polatin | May 2015

Our real purpose for prayer

Our pure origin and heritage

Acknowledging the message, and the messenger

An ‘excellent spirit’ is in you

Freed from intense feelings of inadequacy

Why does it take so long to reach the stage where I am asked by others to pray for them?