All who are interested in the work of Christian Science will recollect the severe letter of denunciation written by Rev. A. J. Gordon, D.D., of this city, and read a few weeks since by Rev. Joseph Cook, from the platform of the Monday lectureship in Tremont Temple. On Monday, the 16th ult., as will be seen by what follows, Mrs. Mary B. G. Eddy was presented to Mr. Cook's audience, and permitted ten minutes in which to reply to that letter of condemnation, which reply was taken in full by a short-hand reporter who was present, and is transcribed below.

Mrs. Eddy responding said: "As the the time so kindly allotted me is insufficient for even a synopsis of Christian Science, I shall confine myself to questions and answers.

Am I a spiritualist? I am not, and never was. I understand the impossibility of intercommunion with the so-called dead. There have always attended my life phenomena of an uncommon order, which spiritualists have miscalled mediumship; but I clearly understand that no human agencies were employed. That the divine Mind reveals itself to humanity through spiritual law, and to such as are waiting for the adoption, to wit: the redemption of the body, Christian Science reveals man's salvation from sickness and death, as wrought out by Jesus, who robbed the grave of victory, and death of its sting. I understand that God is an ever present help in all times of trouble, have found him so, and would have no other gods, no remedies in drugs, no material medicine.

Do I believe in a personal God? I believe in God as the Supreme Being. I know not what the person of Omnipotence and Omnipresence is, or what the Infinite includes; therefore, I worship that of which I can conceive, first, as a loving Father; and as thought ascends the scale of being to diviner consciousness, he becomes to me what the Apostle declared, —"God is Love"—divine Principle— which I worship, and "after the manner of my fathers so worship I Him."

Do I believe in the atonement of Christ? I do; and this atonement becomes more to me since it includes man's redemption from sickness as well as sin. I reverence and adore Christ as never before. It brings to my sense, and the sense of all who entertain this understanding of the science of God, a whole salvation.

How is the healing done in Christian Science? This answer includes too much to give you any conclusive idea in a brief explanation. I can name some things by which it is not done.

It is not one mind acting upon another mind; it is not the transference of human images of thought to other minds; it is not supported by the evidence before the personal senses,—science contradicts this evidence; it is not of the flesh, but of the Spirit. It is Christ come to destroy the power of the flesh; it is Truth over error; that understood, gives man ability to rise above the evidence of the senses and take hold of the eternal evidences of Truth, and destroy mortal discord with immortal harmony, the grand verities of being. It is not one mortal thought transmitted to another's thought, from the human mind that holds within itself all evil.

Our Master said of one of his students, "he is a devil," and repudiated the idea of casting out devils through Beelzebub. Erring human mind, is by no means a desirable or efficacious healer: such healing I deprecate, it is in no way allied to divine power. All human control is animal magnetism, more fatal than all other methods of treating disease.

It is not a remedy of faith alone, but combines faith with understanding, through which it touches the hem of His garment, and we know the Omnipotent has all power: "If the Lord be God, there is none beside Him." 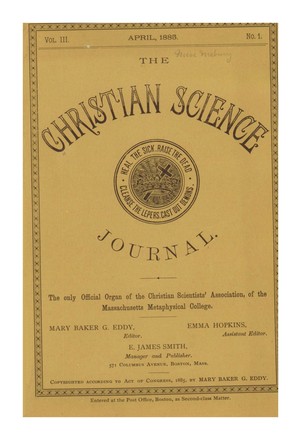 WHAT I LIVE FOR

[Agreeable to the invitation of the Editor of...

TAULER AND THE MYSTICS